Ireland’s Shane Lowry has won his first major golfing title at the British Open. He became the 148th Open Champion after a six shot success at Royal Portrush Golf Club in Northern Ireland with a score of 269. Royal Portrush last hosted the British Open in 1951, the only time it had been outside Scotland and England.

Lowry, the 32-year-old Irishman with stout nerves and a soft touch around the greens, endured the worst weather of the week and the Sunday pressure of a sellout crowd cheering him along to win the British Open by six shots at Royal Portrush.

The silver claret jug is staying on the Emerald Isle.

In emotional scenes during the 148th championship, a sellout crowd cheered Lowry on after every shot. 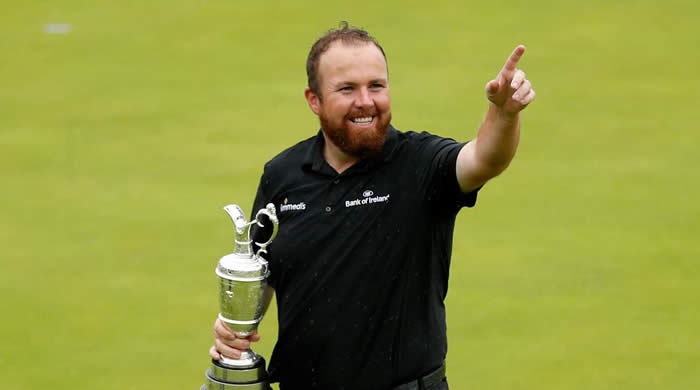 He had a four-stroke lead heading into Sunday’s final round. He increased it to win the British Open by six strokes, finishing at 15 under par and transforming the typically fraught closing holes into a merry march through the drizzle as his compatriots — Irish and Northern Irish alike — accompanied him with song, roars and good cheer.

And no one got closer than three shots all day of Lowry, who finished at 15-under. Three years ago he was presented with the same scenario at the US Open and his nerve failed him. Today, willed on by the sodden spectators, he was well and truly up to it.

Tommy Fleetwood had to settle for his second runner-up finish in a major. He missed a 10-foot birdie putt on the opening hole that would have cut the deficit to two, and he missed a 5-footer for par on the third hole. His hopes ended with a double bogey from the bunker and the rough, and he closed with a 74.

Tony Finau shot 71 to finish alone in third, though he was never closer than seven shots. Brooks Koepka, going for his fourth major in the last seven, began the final round seven shots behind and opened with four straight bogeys. He shot 74 and tied for fourth.

The Open Championship or the British Open, is an annual golf tournament conducted by The Royal and Ancient Golf Club of St Andrews. It is one of the four major championships in professional golf, and is the oldest of the four.

Shane Lowry is an Irish professional golfer who plays on the European Tour and the PGA Tour. His notable achievements include winning the 2019 Open Championship, the Irish Open as an amateur in 2009, and the 2015 WGC-Bridgestone Invitational.

Here’s what the winners get to take home.

The top 70 players, including ties, who made the cut on Friday, bring home five-figure paychecks for their four rounds of play. Here’s a look at how much those in 65th-through-70th place will earn: