Bryson DeChambeau opened with a 67, yet it’s his drop on the seventh hole that we’ll recall. His drive stopped against certain sticks left of the fairway, and he seemed to believe that he was entitled to relief because there have been fire ants near his ball. No seriously. Fire ants. Also, they were around five feet from his stance!

Fortunately, PGA Tour rules official Ken Tackett (whom you’ll remember because the second rules official from the Fence Incident at Muirfield Village) was having none of it. DeChambeau played the ball because it lay and aroused with a double-bogey six. Let us take you to the recap of the whole round. 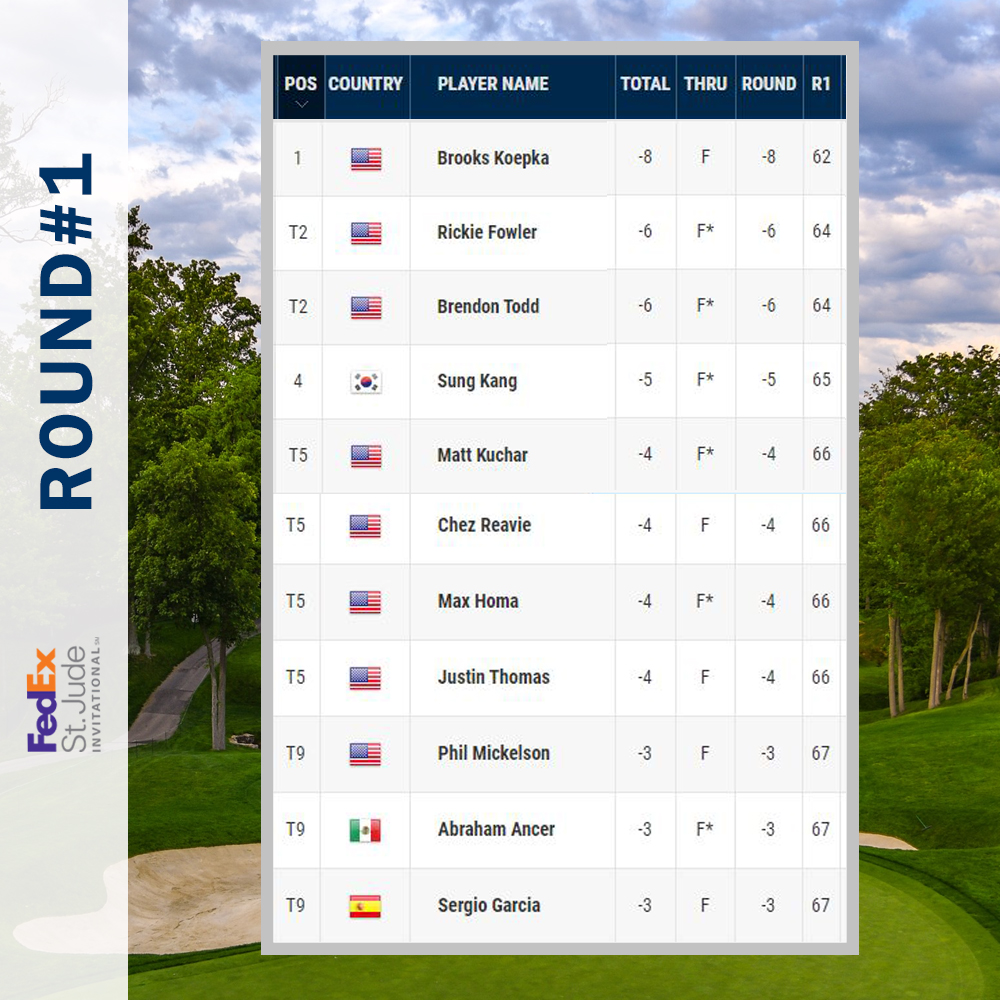 A very familiar name at the highest of the leaderboard after the first round of the WGC FedEx St. Jude Invitational. Defending champ Brooks Koepka posted an 8-under 62 within the first round.

Koepka seeking after an extremely solid completion here in Memphis. He has struggled for the current year on the PGA tour with just one top 10 finish this year. However, he enjoys TPC Southwind and knows about the course.

Brendon Todd hit 13 of 18 greens in regulation during his 1st round at the WGC FedEx St. Jude Invitational and had a decent round of putting, without any misses on putts within 10 feet. Todd completed his day tied for second at 6 under with Rickie Fowler. 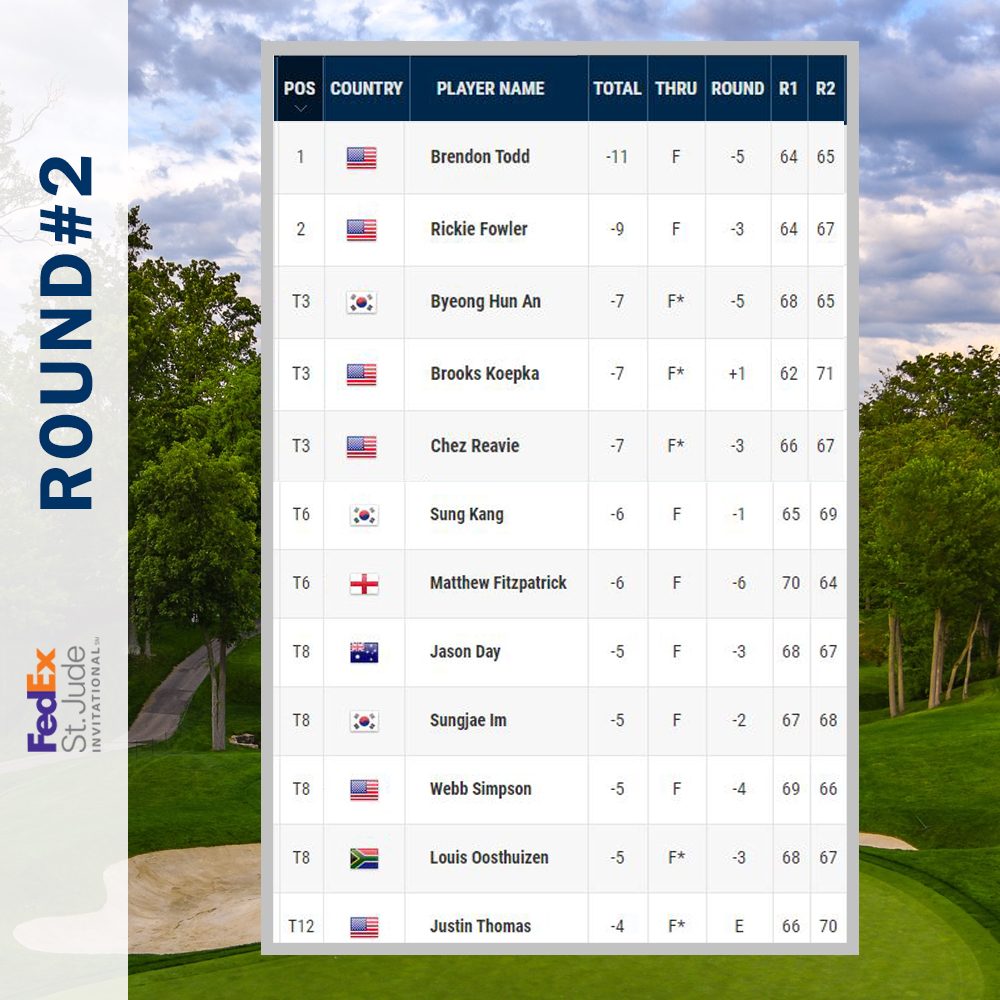 After the second round, Brendon Todd leads going into moving day. The 35-year-old has been on the road since 2012 with just three wins, yet two of them he earned this season.

After shooting a 6-under 64 on round 2, Todd kept the great times rolling, registering a 5-under 65. He’s currently leading the WGC FedEx St. Jude Invitational by two strokes over Rickie Fowler heading into the weekend.

Rickie Fowler chipped certain birdie on the 18th hole at TPC Southwind and was two strokes out of the lead at the halfway point of the WGC FedEx St. Jude Invitational. Fowler shot a 3-under 67. It follows a 6-under 64. Both follow some struggles. No successes since the Waste Management Phoenix Open in February of 2019. No finish above tied for 12th since the Tour’s return – with three missed cuts.

In the second round, South Korean Byeong Hun An makes birdie on the par-4 10th hole. He hit 14 of 18 greens in regulation and had a decent round of putting, without any misses on putts within 10 feet. Byeong Hun completed his day tied for third at 7 under with Brooks Koepka and Chez Reavie.

Koepka shot an 8-under 62 during the first round, tying his career-low score. He was nine strokes worse during the second round.

Chez Reavie hit 12 of 14 fairways and 9 of 18 greens in regulation and completed the day Bogey-free 3-under. Reavie finished his day tied for 3rd at 7 under in the second round. 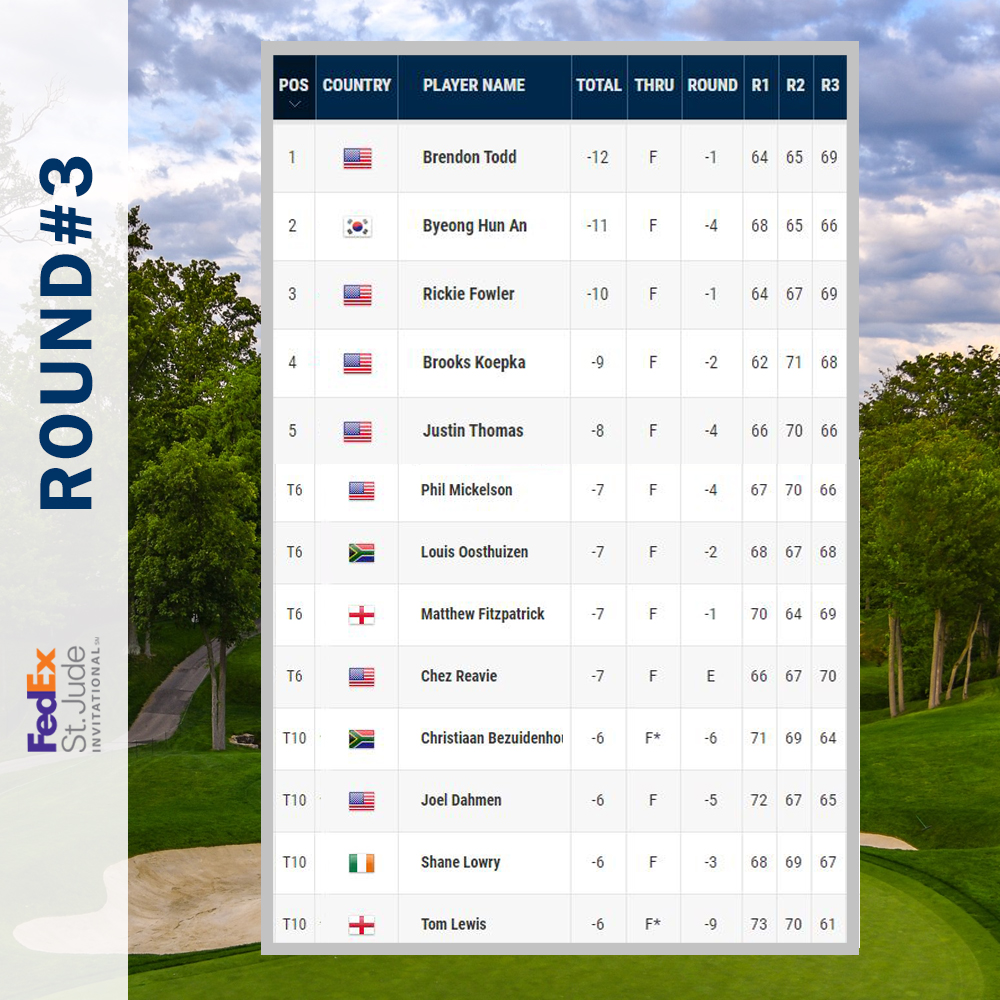 The third round of the WGC-FedEx St. Jude Invitational was a wild, up-and-down Moving Day that resulted during a neatly separated leaderboard. Here’s how the top of the leaderboard stands after Day 3.

Brendon Todd signed for a 1-under 69 on Saturday to stay on top at WGC-FedEx St. Jude but saw his lead shrink to at least one shot with 18 holes remaining.

Todd made five birdies in Round 3, however, four bogeys kept him from building a bigger cushion in pursuit of his third victory this season. He won the Mayakoba Classic and Bermuda Championship in the fall of 2019.

Todd just hit half of his fairways at TPC Southwind during the third round, regardless of one among the foremost accurate drivers of the ball on Tour. He also ranks 75th within the driving distance out of a field of 78

Byeong Hun An leads the chase of Todd after posting 66 on Saturday. He poured in four straight birdies late within the round to make his climb the leaderboard. He hasn’t won on either the PGA Tour or European Tour since 2015 when he took the distinguished BMW PGA Championship.

Rickie Fowler, who was alone in second after Round 2, did not structure any ground on moving day. He matched Todd’s performance with a three-birdie, two-bogey 69. Rickie Fowler completed his day tied for 3rd at 10 under in the third round. 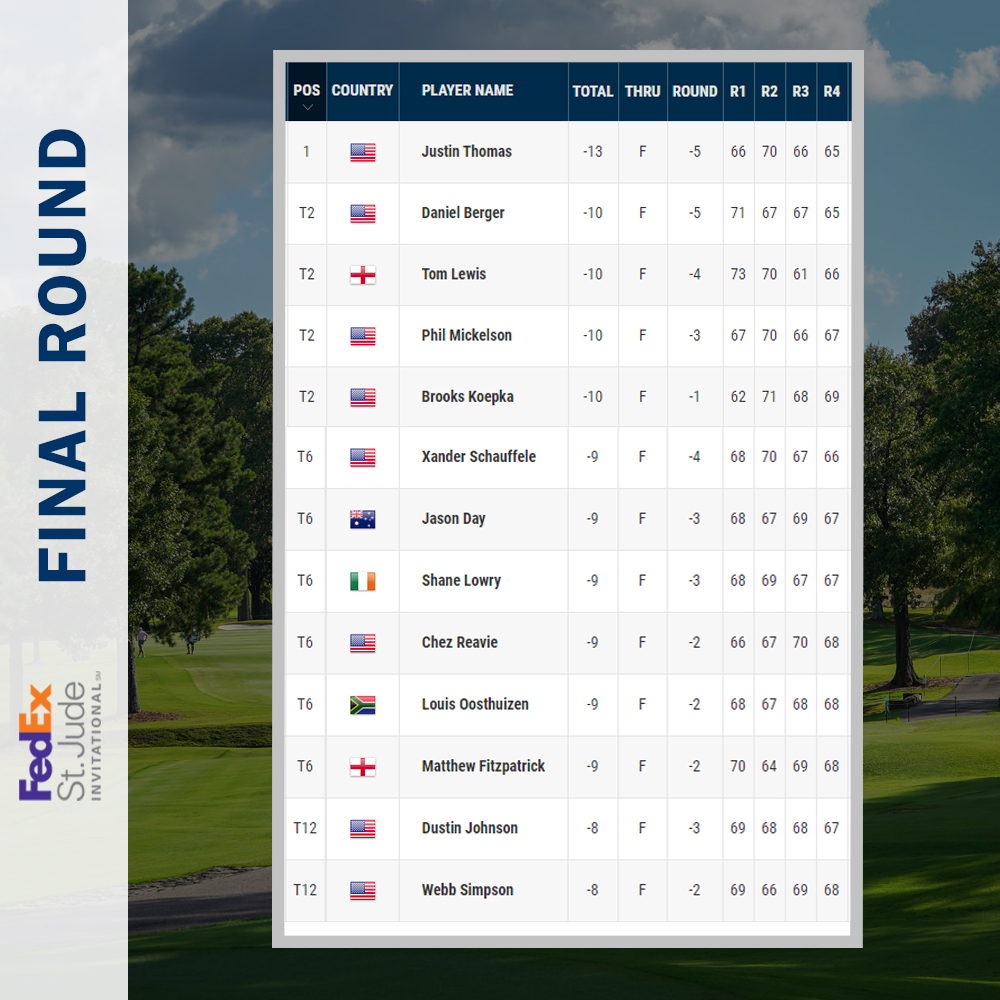 He started the final round in fifth place. Never before has he won after starting the ultimate round so low on the leaderboard. He also trailed by four, matching the most important final-round deficit he’s overcome on the PGA TOUR.

Thomas and Koepka, the past two winners of this event, had separated themselves from the sector at that time, but Thomas seemed to have the tournament in hand when Koepka’s own pitch to the 16th rolled over the green. The bogey gave Thomas a two-shot lead.

Tom Lewis hit 16 of 18 greens in regulation and completing at 10 under for the tournament. He completed his day tied for 2nd at 10 under with Daniel Berger, Brooks Koepka, and Phil Mickelson, he got $695,000.