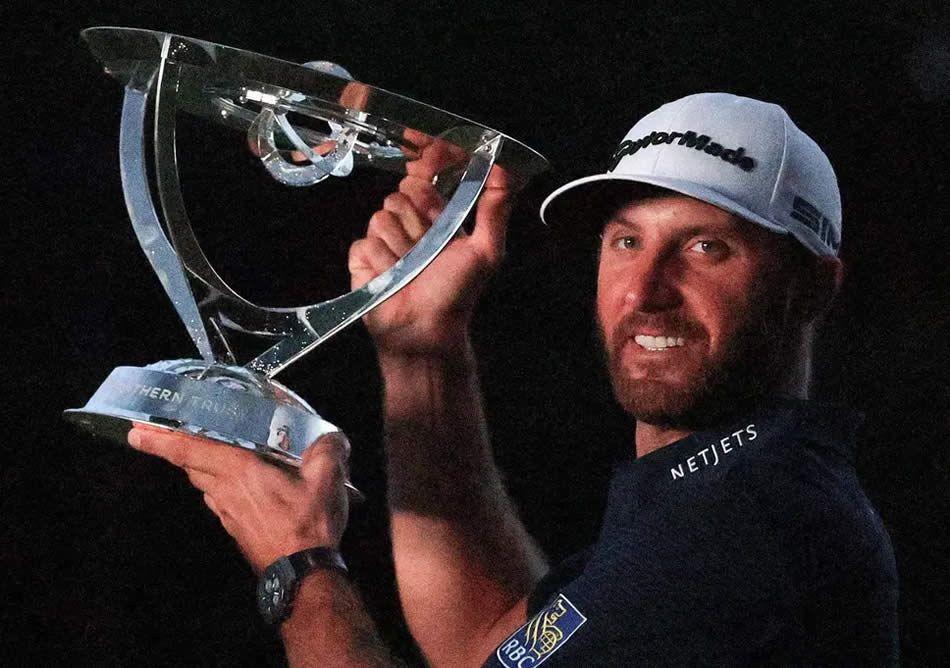 The Northern Trust was the first of three events in the US circuit’s FedEx Cup playoffs that will determine the PGA Tour champion for this season. Top 125 world best golfers participated in Northern Trust. After completed the first event of FedEx Cup play-offs now there are around top 70 players in season points will advance to next week’s BMW Championship 27 to 30 Aug. 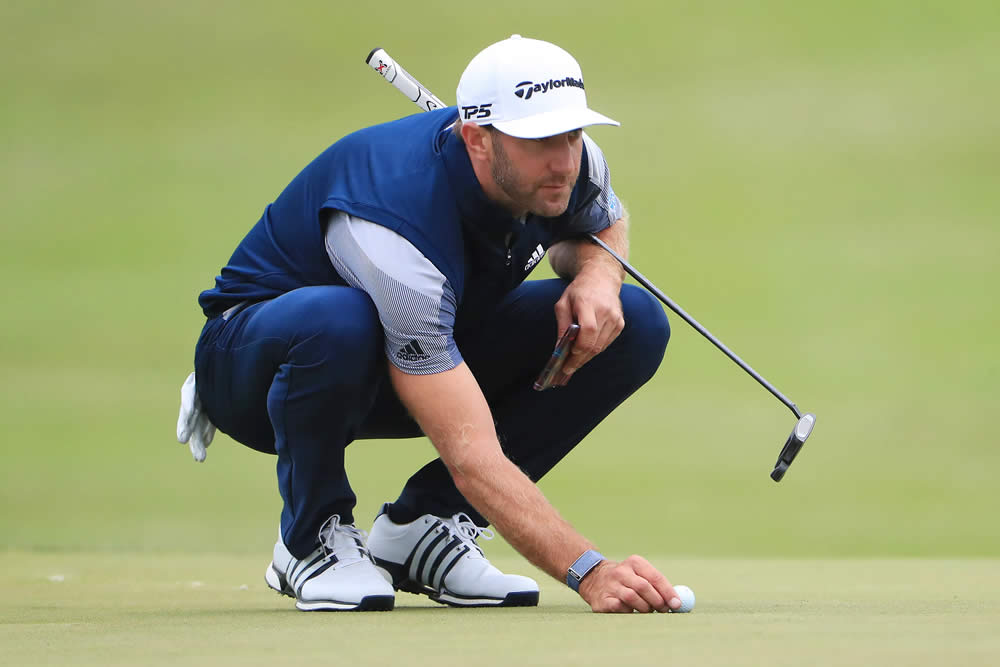 There can be no second opinion about the solid game played by Dustin Johnson on day 2 and 3 but also, he became the wildest on final day at TPC Boston in Massachusetts. Second lowest 72-hole score in PGA tour History. This win moved him to first in the FedEx Cup standings and returned him to number one in the Official World Golf Ranking. Without further ado let’s take a look on the First FedEx Cup play-offs.

The back nine was especially productive for each of the four players sharing the lead [Harris English, Kevin Streelman, Cameron Davis, Russell Henley].

All the stars were shining at TPC Boston in the first round of The Northern Trust, yet not every one of them showed out. The co-lead after Round 1 is shared by three players who are ranked outside the best 40 on the world but completely shot 64s to open the first FedEx Cup Playoffs event.

Let’s take the look at their performance of the large names around this leaderboard.

This exceptional performance from American golfer Harris English is unsurprising if that you’ve been focusing for the past few month. The American golfer Harris English has five straight top 25s and can completely hang with the best ball-strikers within the world. He completed second in this first-class field (to Streelman) in iron play and shot a 31 on the harder side of the course (the back nine).

Harris, who positions fifth in strokes gained, total since the PGA Tour restart in June, got looking blasting so far with an eagle and two birdies through his first four holes. He added five birdies to his card – offset by two bogeys – to make sure about his possible share of the 18-hole lead and completing his round at 7 under for the tournament.

Kevin Streelman, 41 years old American professional golfer shows his best class. In his first round at the Northern Trust, he hit 11 of 14 fairways and 14 of 18 greens in regulation, completing at 7 under for the tournament.

After his FedEx Cup Playoffs debut, despite some early nerves the young Australian golfer showcased utmost nerve in posting a seven-under 64 in the first round. He tied atop the leaderboard with Harris English, Kevin Streelman and Russell Henley, with seven others one shot behind.

My swing was little sloppy and I wasn’t hitting the ball strong on the range,” Davis said. “And afterward to begin the back nine very strong and hit a lot of good quality shots.

Henley was four shots behind with four holes to play, then completed birdie-par-birdie-eagle and his Henley eagle was almost an albatross, as his 2nd shot ended up around 2 feet from the hole. He had a great round of putting and completing at 7 under for the tournament.

He expressed his felling after tied up the top leading board.

“It was correct where I needed to hit it,” Henley said of his shot on 18. 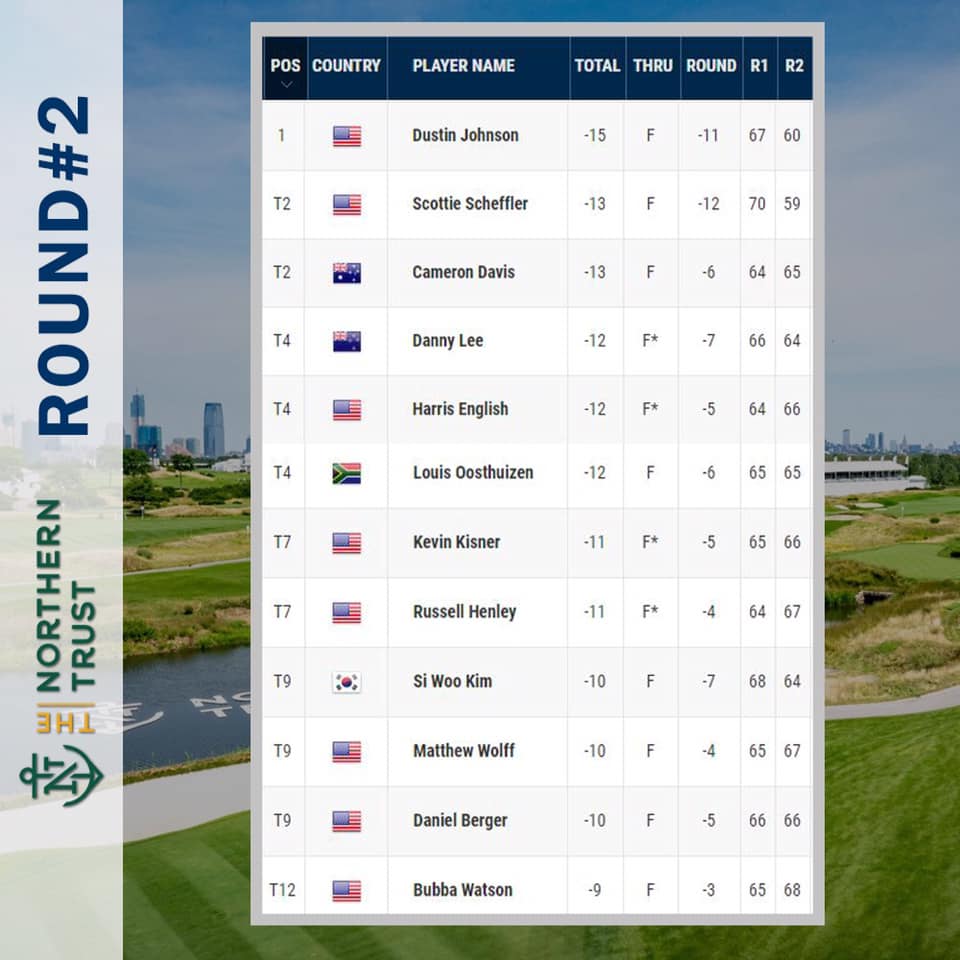 The second round of The Northern Trust played on Friday 21.08.2020 was one of the wildest two days of an event that the PGA Tour has seen after a long time.

Let’s take a look on the top of the leaders’ board after the end of round two.

There are such huge numbers from DJ’s second-round 60, we don’t know which stands apart most. However, we will go with this: Johnson gained eight strokes on the front nine of the course. No one else other than Scheffler gained besides on 6 strokes on the whole day.

DJ moved into a two-stroke lead and thanks of a fabulous 11-under 60 best career low. The 2016 U.S. Open Champion and twice Northern Trust winner, was 9 under through eight hole and afterward picked up shots at 10 and 11, yet he parred his last seven to miss out a 59.

PGA Tour youngster Scottie Scheffler proceeded with his exceptional ascent on round 2, shooting a 13-under-par 59, Mass., the twelfth sub-60 round in PGA Tour history. Scheffler carded six birdies on his front 9, with four directly from Nos. 4 through 7. Then he would reel out three back to back birdies on two more occasion, at Nos. 9-11 and 14-16, before his closing birdie gave him the 59.

In his second round, Cameron Davis hit 8 of 14 fairways and 15 of 18 greens in regulation, and had an incredible day on the green leaving no misses on putts inside 10 feet. Davis completed his day tied for second at 13 under with Scottie Scheffler.

After the round three, Johnson overwhelming prospect to the guys trying to chase him. His birdie-eagle finish gave Johnson a 7-under 64 and extended his lead to five shots over Harris English and Scottie Scheffler.

The completion would have proved to be useful the day before. Johnson was an amazing 11-under par through 11 holes round 2 and had the golf world inquisitive in the event that he would go as low as 57 to set the PGA Tour record. Rather, he got finished with seven consecutive pars for a 60, his best ever however not what it could have been.

Harris English had three birdies in a four-hole stretch at an early stage the back nine and was tied for the lead when Johnson made his lone bogey of the round on the thirteenth hole when he neglected to get all over from a bunker.

Harris however, followed with back to back bogeys when he missed the green well to one side of the water on the par 3 sixteenth, and three-putted from 70 feet on the seventeenth. He missed a third back to back putt from 7 feet or closer, the last one for birdie, and settle to a 66. 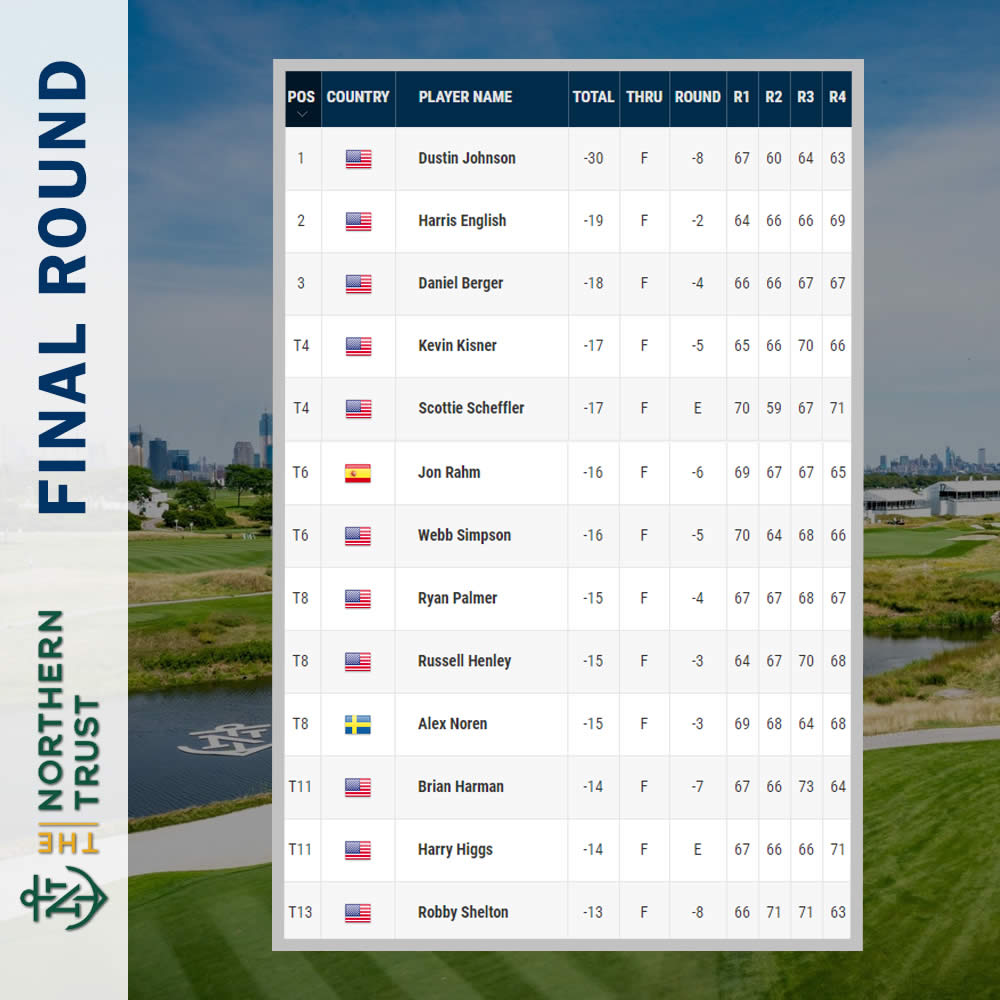 Dustin Johnson wins his second title in three months in remarkable style, cruising to victory at the Northern Trust by 11 shots. DJ just grabbed another $ 1,710,000 million after winner of the event. He tied second at the US PGA in August, made six birdies and an eagle on his way to a 63 at The Northern Trust 2020.

Johnson said “Obviously it’s been jumping around a bunch here the last few months, but the last time I was number one, I think I stayed there for quite some time, and that’s another goal of mine… to see how long I can stay at number one.”

In the final round, Harris English makes a 25-foot birdie putt on the par-3 8th hole. Harris English hit 16 of 18 greens in regulation and completing at 19 under for the tournament. English finished his day in 2nd at 19 under and also won 2nd prize of the event worth as $ 1,035,500.

Daniel Berger, American golfer hit 12 of 18 greens in regulation during his final round at the Northern Trust, has a great round of putting eventually complete his day at 18 and got 3rd position in the tournament. He also earned a handsome amount of $655,500.

PGA Tour Golfers React to Big Bonuses for the Most Popular Players: ‘There’s a little bit of envy’