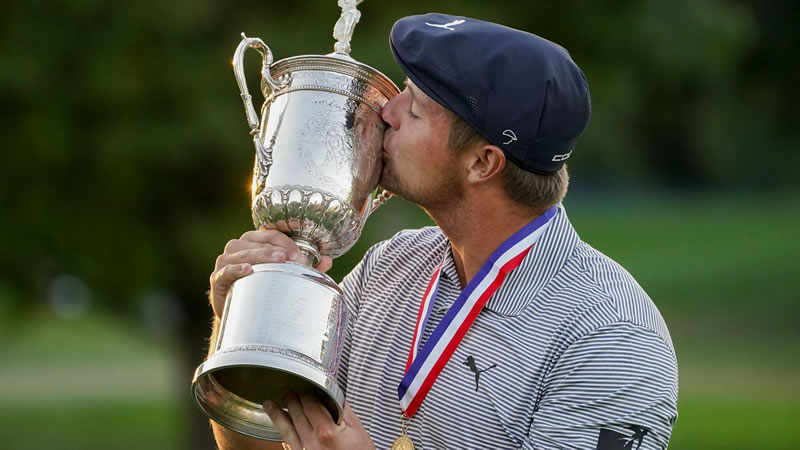 Bryson DeChambeau saved his best round for last at the 2020 U.S. Open, carding a 3-under 67 at Winged Foot on Sunday to claim his first career major championship. DeChambeau’s closing round was just two strokes off the best 18-hole score of the week (65) as he grinded out grueling, sometimes gusty conditions with an effortless combination of his length off the tee and control around the greens.

DeChambeau, who caught and then surpassed 21-year-old Matthew Wolff (the 54-hole leader), was the only golfer in the field to finish with a final-round score under par, cementing himself in the history books in his seventh career win on the PGA Tour. The last time a U.S. Open champion owned the only final-round score under par was 1955 — 38 years before DeChambeau was born (!) — when Jack Fleck pulled off the feat after beating Ben Hogan in an 18-hole playoff. He polished off hole No. 72 in style, too, dropping in a par save and letting out a roar. 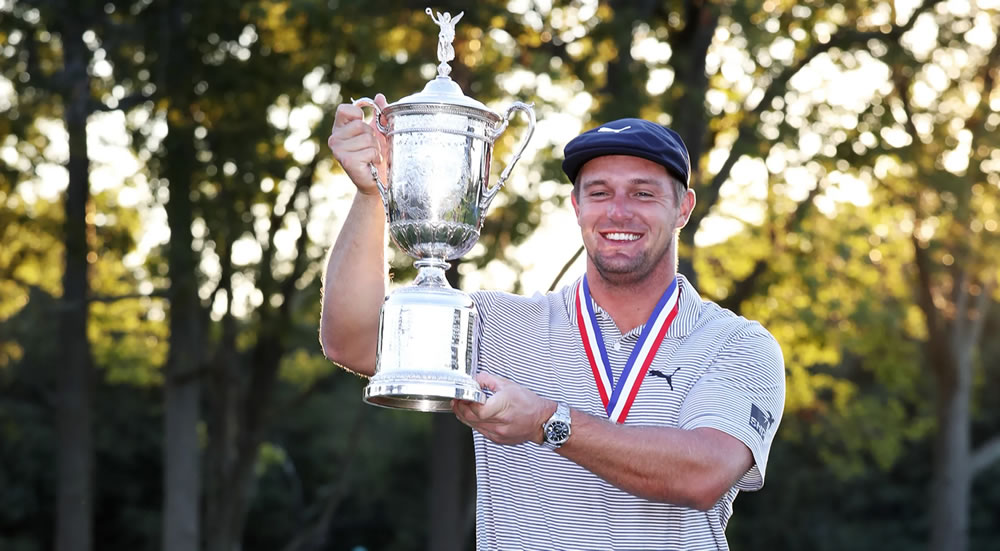 It has been a breakout year for DeChambeau, who captured golf’s first major of the 2020-21 season on Sunday. In the last year, he’s added a significant amount of muscle to his 6-foot-1 frame and built himself into the longest golfer off the tees in the world. What’s come of the new edge is five top-five finishes this calendar year, a (previous-best) top-five finish at the PGA Championship last month and an advantage off the tees that’s becoming more pronounced with each passing event.

DeChambeau finished fourth in strokes gained off the tee this week and fourth in driving distance on Sunday. He was also the first player to make an eagle in his final round and win the U.S. Open since 1937, per Justin Ray. DeChambeau accomplished that on the ninth hole and cruised to victory from there.

“On 9 was when I first thought, ‘OK, this could be a reality.’ I made that long eagle putt and shocked myself making it, too. I thought to myself I could do it, and then immediately after I said, ‘Nope, you gotta focus on each and every hole.’ I just kept telling myself ‘Nope, we’ve got three more holes, we’ve got four more holes, we’ve got five more holes.’ Whatever it was, I just had to keep focused, make sure I was executing every shot the best I possibly could.” 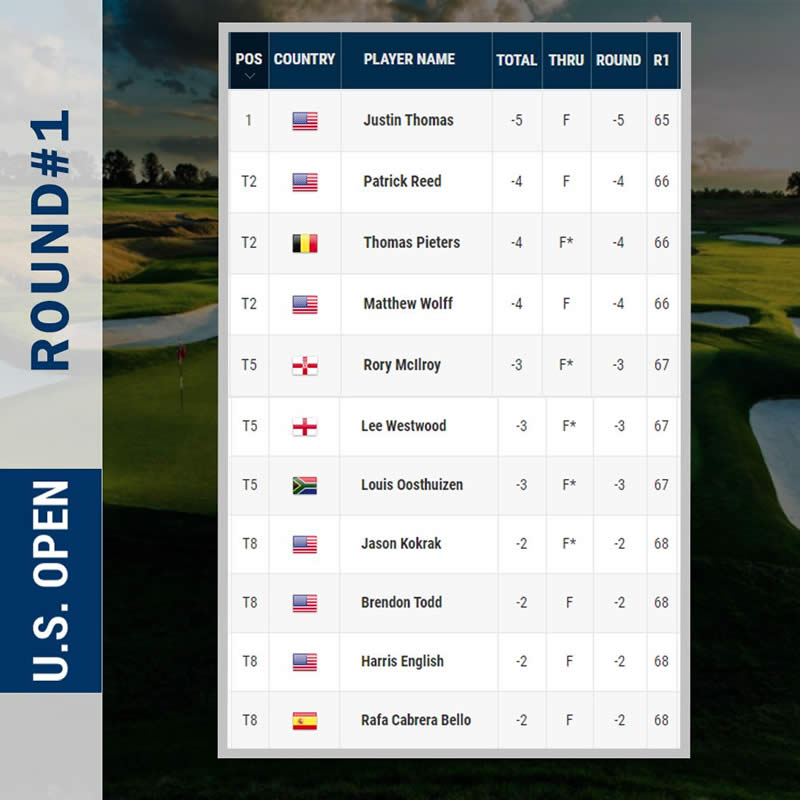 Finishing runner-up is the aforementioned Wolff, who was on the precipice of making his own history before surrendering his 54-hole two-stroke lead. If he had closed it out, Wolff would have become the youngest U.S. Open winner since 1923 (Bobby Jones) and youngest major champion since Tiger Woods (1997 Masters). Instead, he finished with a final-round 5-over 75 as he tried to keep up with DeChambeau’s mesmerizing performance. It’s Wolff’s second consecutive top-five finish in a major, however, on the heels of a T4 finish at the PGA Championship last month.

Rounding out the top five is a two-way tie for third between Harris English (+2) and Louis Oosthuizen (+2). There was a three-way tie for fifth with Dustin Johnson, Will Zalatoris and Xander Schauffele all finishing 5 over on the week. 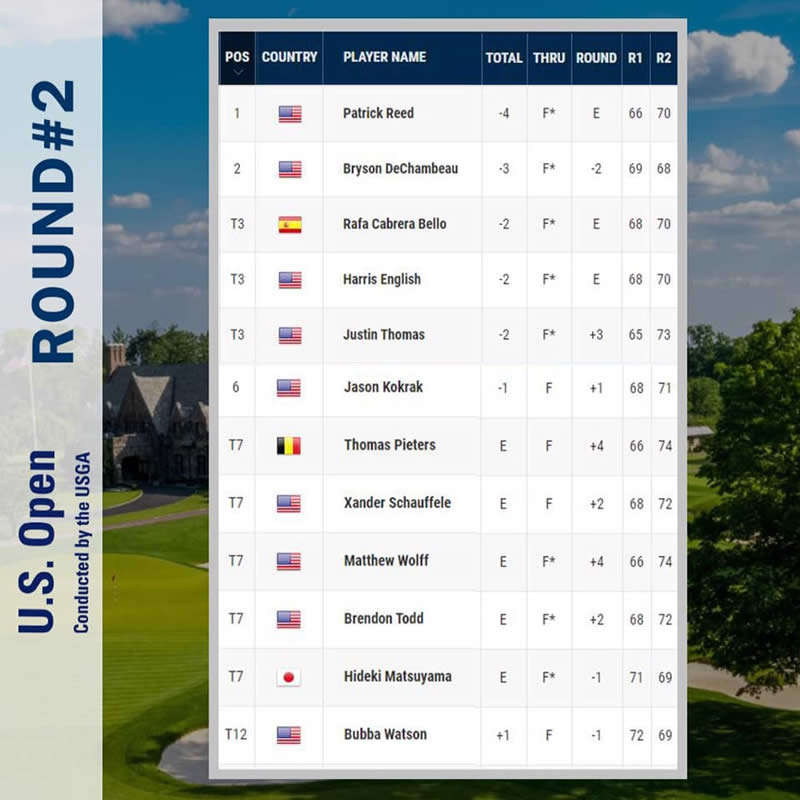 1. Bryson DeChambeau (-6): DeChambeau’s built his game around length off the tees. It’s fitting, then, that he finished third in the field this week in strokes gained off the tee, strutting to his first major championship on the strength of his best skill. DeChambeau had just one bogey all day (on No. 8) and found a new stride after an eagle on No. 9. He played the front nine at 2 under and played a bogey-free back nine at 1 under.

“Oh my gosh, I can’t believe it,” DeChambeau said after the round on NBC. “It’s just an honor. It’s been a lot of hard work.”

2. Matthew Wolff (-E): It’s easy to look at Wolff’s runner-up finish as a disappointment after he held the 54-hole lead, but finishing runner-up in a major championship at his age is the stuff of legend. In fact, Wolff, 21, is the youngest runner-up at the U.S. Open in 80 years (Jack Nicklaus, 1960). How he hit only two fairways on Saturday and still squeaked out a 5-under 65 will forever remain majestic. Wolff’s weaknesses, particularly with his putter, showed in his 5-over 75 on Sunday, losing strokes on the field with his putter. But being one of only two professional golfers on tour to not be over par this week at wicked Winged Foot is something he can build off. 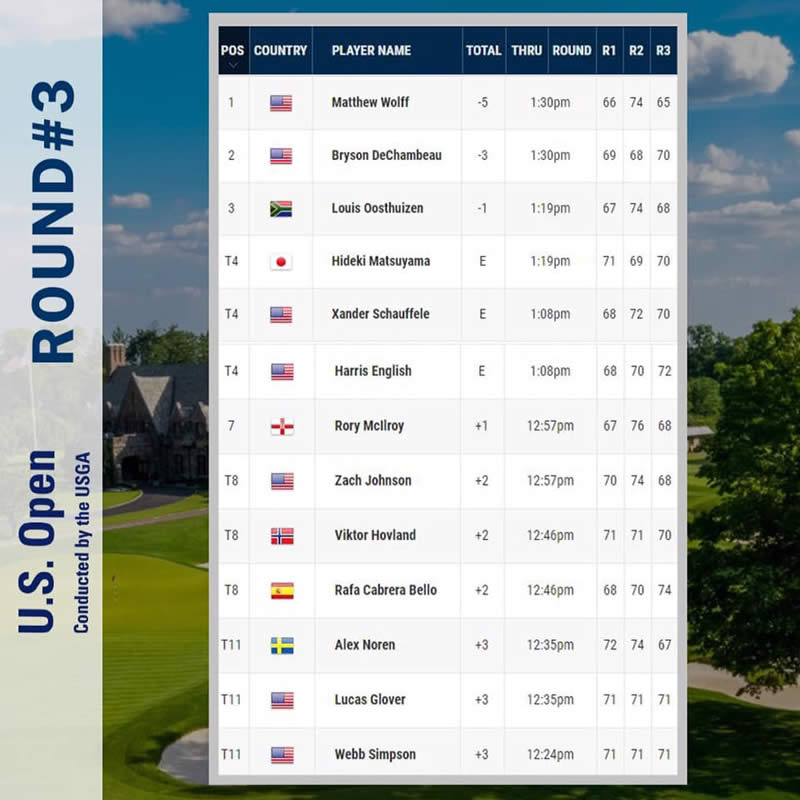 3. Louis Oosthuizen (+2): One-time major champion Oosthuizen finished in sole possession of third — his second-best finish at the U.S. Open ever — on the strength of a final-round 73. Oosthuizen played with control all week, finishing in the top 20 in greens hit in regulation and in fairways hit. As treacherous as Winged Foot played all week, it was a distinct advantage he used to overcome his lack of length off the tees.

4. Harris English (+3): Best finish in a major ever for 31-year-old English. He’s coming off one of his most productive seasons on the PGa Tour and was in the thick of it all week. Kicking his day off with a double bogey put his back to the wall early Sunday, he rallied to play the final 17 at 1 over. He finished the week second in the field in fewest number of putts at 111. 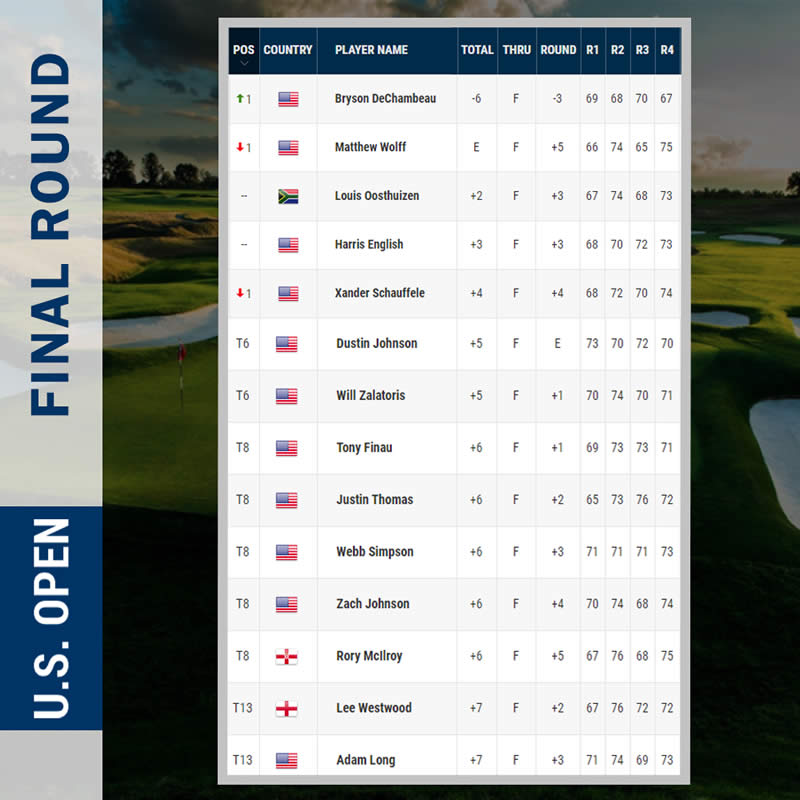 5. Xander Schauffele (+4): In each of Schauffele’s four wins, he has entered the final round trailing by at least two strokes. And so entering Sunday, just five strokes off the lead, a comeback didn’t seem likely … but it also didn’t seem entirely impossible. He had a strong even-par opening nine to hang around, but had five bogeys in his last six to drift just outside the mix. Strong overall showing for him this week, finishing first in the field in strokes gained with his short game and 11th putting.

Want the sharpest DFS advice, picks and data-driven golf analysis? Listen below and subscribe to The First Cut Golf podcast where we explain what’s happening on the course so you can win off of it.