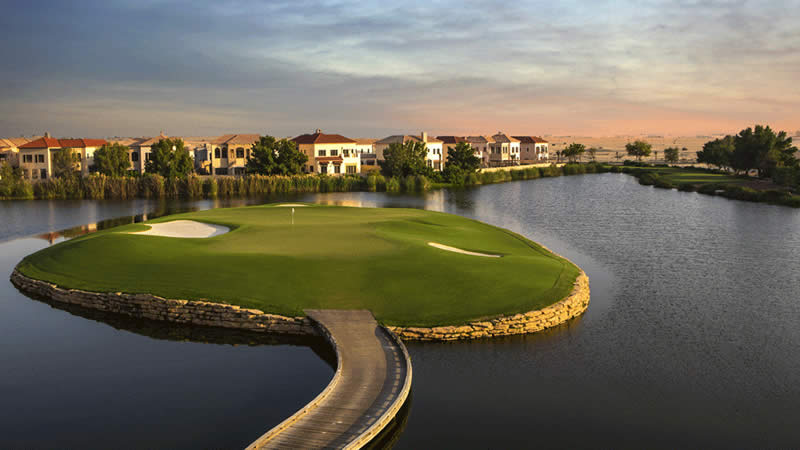 England’s Andy Sullivan holds a three-shot lead at Jumeirah Golf Estates in Dubai as he chases a second European Tour victory of the season.

Andy Sullivan continued his impressive start to extend his lead to three strokes at the Golf in Dubai Championship, with fellow Englishman Matt Wallace and Ross Fisher heading the chasing pack.

Sullivan followed up his first-round 61 with a six-under 66 on the Fire Course at Jumeriah Golf Estates, taking the four-time European Tour winner to 17 under and increasing his advantage over the chasing pack.

The world No 72’s halfway total is the lowest on the European Tour season, with Sullivan missing a birdie chance at the last to equal the all-time European Tour 36-hole record set by Ernie Els in 2004.

“If you can ever say this, I feel like I’ve got the golf ball under some sort of control at the moment,” Sullivan told Sky Sports. “I feel like I know what shapes I can hit, how much I can move it and it just feels really comfortable out there off the tee and into the greens.

“There’s not many pins I can’t get at at the moment, which is a nice feeling to have. It doesn’t happen too often in the season.“

Sullivan birdied his opening hole and cancelled out a first bogey of the week at the third by picking up a shot at the next, with an eagle three at the seventh seeing him reach the turn in 33.

The Englishman took advantage of the par-five 13th and rolled in a five-footer after a glorious tee shot at the par-three next, before leaving himself a tap-in birdie at the 17th to extend his advantage.

Fisher maintained his bogey-free start to the week with a five-under 67 to jump into a share of second, with Wallace matching his total after a final-hole birdie to also get to 14 under.

“Very happy,” Wallace said. “I’m showing myself a lot of new things of staying patient and knowing that my game is good enough to make some birdies. I didn’t play well for two holes, pretty much, but stuck at it and played the rest quite nice.”

Craig Howie made five consecutive birdies on the front nine on his way to a second-round 68, with the Scot joined on 12 under by Antoine Rozner – who bogeyed two of his last four holes – and Germany’s Max Schmitt.

A round-of-the-day 63 parachuted Steven Brown within six of the lead and in the group tied-seventh that also includes former Ryder Cup star Thorbjorn Olesen, while Scottish trio Robert MacIntyre, Marc Warren and Grant Forrest all head into the weekend on 10 under alongside Danny Willett.