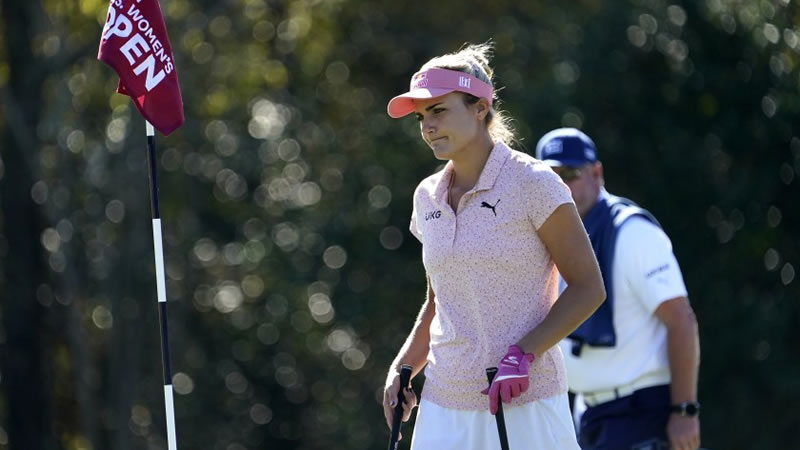 With the PGA Tour off this week, the spotlight is on women’s golf at the season’s final major championship, the U.S. Women’s Open. The increased attention is nothing new for 25-year-old Lexi Thompson, who has been in the glare of the media’s interest for more than half her life.

It was 13 years ago at the U.S. Women’s Open where Thompson first stepped onto the world stage. Thompson was just 12 years old when, at the time, she became the youngest to qualify for the Women’s Open. That 2007 edition was staged at Pine Needles in North Carolina, and Lexi, who still went by Alexis then, brought her father, Scott, along as her caddie. Fans and media alike swarmed. The New York Times wrote a feature on her that week. Fans stood five-deep to try and catch a glimpse of the young girl from Florida who looked poised to become the next star in the women’s game.

“I was practicing my signature on the drive up, and I was just so excited just to be there,” Thompson said about her experience in 2007. “I was like there’s Lorena Ochoa, Annika. It was an unbelievable moment to be there.”

The U.S. Women’s Open has also become a magnifying glass to the putting woes that have plagued Thompson throughout her career, making the major title an elusive one for the 25-year-old. She has just two top-10s in her 13 prior appearances. She finished a career-best T-2 in 2019 at Charleston Country Club, where she was among the best ball-strikers in the field but was held back by an average of 32 putts per round. Since 2013, only twice has Thompson averaged less than 30 putts per round at the U.S. Women’s Open.

In 2020, Thompson’s putting has continued to hamper her success, and she is now on the verge of going a full season without a win on tour for the first time since 2012.

With two events remaining in 2020, Thompson hit the refresh button on her year. This week, she has a new putter in her bag: the TaylorMade Spider Mallet. She’s not sure how many putters she’s had this year and says she’s lost count. Thompson also made a few changes to her setup and moved closer to the ball.

“[I’m] just trying to find something that I am very comfortable with,” Thompson explained. “I’ve never used a Spider before, and I just figured with me, I think I’m better with a bit more of a mallet in reducing face rotation.”

Thompson made another big change this week in adding a new caddie to her bag. She’s borrowing Bryson DeChambeau’s caddie, Tim Tucker. Thompson and DeChambeau share the same agent, Brett Falkoff, who made the arrangement. Thompson’s former caddie, Benji Thompson, moved to the PGA Tour to work with Kevin Chappell.

“We get along with each other very well, so that’s most important for me,” Thompson said about Tucker. “Just getting me laughing. But of course, having my numbers and everything.”

Once the up-and-coming star, Thompson is the veteran to the 41 first-timers who are competing this week at Champions Golf Club. Due to COVID-19, sectional qualifying was abandoned and replaced with a field of fully exempt players and a large number of first-timers. No fans are permitted on-site, and the number of media is significantly reduced, making for a dramatically different experience than the one Thompson experienced when she first stepped into the spotlight 14 years ago.

And while there may be less clamoring, the golfing world will still be watching, albeit from afar, as the young girl from Florida tries to capture her first U.S. Women’s Open.