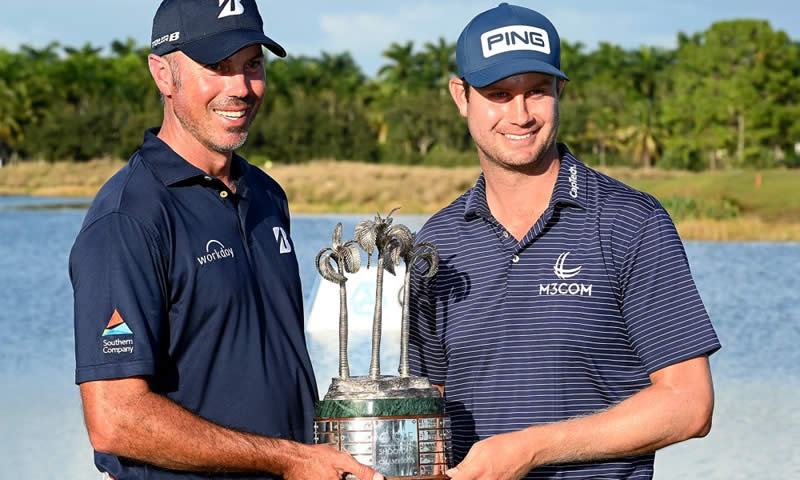 Matt Kuchar’s family has been part of both championship ceremonies when he and Harris English won the QBE Shootout in 2013 and 2016.

This one was a little more special, though.

Kuchar’s 13-year-old son Cameron was his caddie all week for the first time. So that makes him 1-0.

English and Kuchar rode the momentum from their second round 61 in the modified alternate shot to shoot a 12-under 60 in the best ball to win the Shootout for a record third time in the 20th playing at Tiburón Golf Club at the Ritz-Carlton Golf Resort on Sunday.

Kuchar and English won $447,500 apiece, and now Kuchar’s son will shift into a teammate for his father at this week’s PNC Championship, previously known as the Father/Son, in Orlando.

“He’s been dying to do this, and to win in the style we did, and then to be able to roll it over next week …” Kuchar said. “I was nearly tearing up on the 18th green thinking about just how special of a thing it is to do something like that with your son on the bag, The memories we get to make are pretty special.”

The third title — other players have won three times not all with the same partner — wasn’t the only record. They beat their own tournament scoring record they had tied in 2013 in style, with English finishing birdie-eagle-birdie for a 37-under total, three shots better. And they won by nine, beating the previous mark of seven that they also shared.

“The show Harris put on on the back nine was just awesome,” Kuchar said. “I think he pulled me aside after No. 14 and said, ‘I think we need two shots to set the new mark.’ I said, ‘We’ve got four chances,’ and he went ahead and went birdie-eagle-birdie to close it out. It was fun to watch.

“We were just talking earlier about how this new record is going to be a tough one to catch, but I know we look forward to trying it again.”

Defending champions Rory Sabbatini and Kevin Tway rallied to finish second at 28 under, along with Kevin Na and Sean O’Hair, and Lanto Griffin and Mackenzie Hughes. Sabbatini and Tway shot a 61, the same as English and Kuchar had in modified alternate shot Saturday. 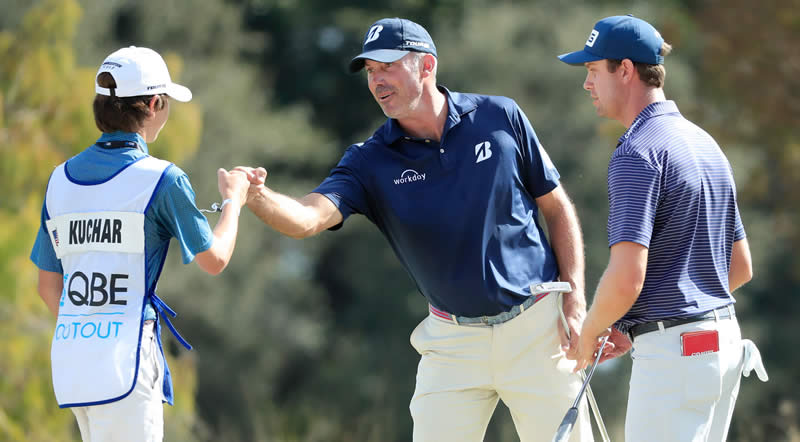 “We managed in best ball to tie their alternate shot score,” Sabbatini quipped. “If there’s anything to be taken away from that, apparently we’re not very good at alternate shot or best ball. We played good, but their golfing (Saturday) was obviously fantastic. It was a highlight reel of Matt Kuchar’s iron shots. They played great and they gave themselves a pretty good cushion.”

“They were playing a different league of golf out there, for sure,” said O’Hair, who was going for his third title, with the previous two coming with two different partners. “The way they struck the ball and putted, I don’t think they did anything wrong.”

English and Kuchar started the final round with a five-stroke lead, and became the first team to win three times.

The team was never a planned one.

Kuchar was originally supposed to play with Brandt Snedeker in the Shootout in 2013, but Snedeker injured his leg in a Segway accident in China and had to withdraw. So then-tournament director Taylor Ives called up Kuchar and asked him who he wanted to play with. He chose English.

“I don’t know that there’s a real rhyme or reason,” Kuchar said of the level of their success. “I think we make a great team, but to be able to … but in three wins, to have a couple where we win by seven, win by nine, you don’t get many of those. It’s pretty special and just some really good play.”

Curtis Strange and Mark O’Meara also won by seven, back in the first year of the tournament in 1989 when it was at Sherwood Country Club in Thousand Oaks, California. Fred Couples and Raymond Floyd won at 34 under in 1990.

English and Kuchar more than matched those, and Kuchar getting to do it with his son just added all the more to it.

“Just couldn’t have been better people to be partnered with, be paired with, be out on the course,” Kuchar said. “Everybody that’s involved with this tournament, all the other players, all the other caddies were so generous and cool with Cameron.