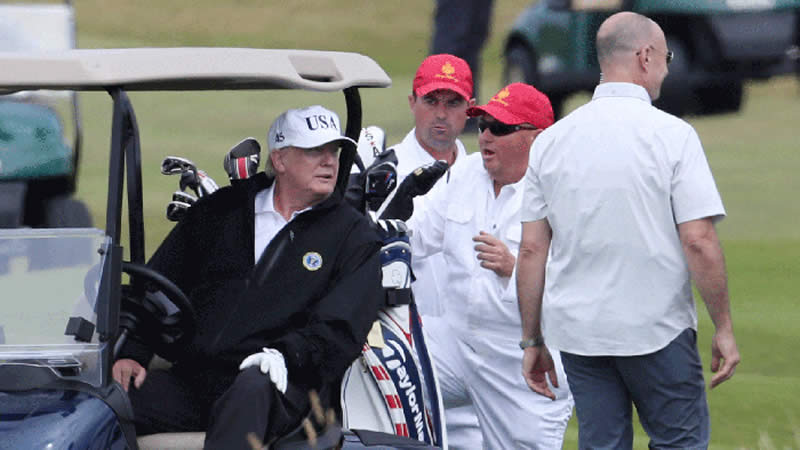 Golf’s governing bodies are under pressure to distance the sport from outgoing US President Donald Trump as the Republican leader continues to rock the democratic process in the world’s most powerful western nation.

The Trump National Golf Club has been chosen to host the PGA Championship next year but, writing for Golf Digest, John Feinstein argued the prestigious major tournament needed to be moved.

“It needs to announce the decision today and make it very clear: We want nothing to do with soon-to-be-former President Donald J. Trump,” Feinstein wrote.

Throughout his presidency Trump has attracted the ire of his constituents for his penchant for flying to his favourite courses to play golf in times of crisis.

He owns several golf clubs and golf resorts and has made the sport central to his business empire.

Now, with his legacy to be forever tied to one of the darkest days in US political history, his relationship with the sport has become dangerously toxic, according to Feinstein and several other respected golf scribes.

“In addition to everything else, Trump is the worst possible ambassador for golf: an obese old guy slouched in a cart playing only at gauche private clubs w/faux waterfalls,” tweeted senior writer for Golf Magazine Alan Shipnuck.

“Whether it’s today’s Medal of Freedom ceremony or the ’22 PGA Ch., aligning w/Trump is a stain on the game.”

According to Feinstein the clock is ticking on golf’s response to Trump’s role in breaking down America’s trust in its democracy following a limp response to the Black Lives Matter movement.

“This is no longer a political issue; it is no longer a case of taking a side with one political party or another. This is about a man who encouraged—all but ordered—his supporters to attempt some sort of clumsy coup d’etat on the United States government,” Feinstein wrote.

“This is about a man who, even AFTER finally telling his supporters it was time to leave the U.S. Capitol following one woman’s death and the Capitol building itself—a major part of our country’s history—had been severely damaged, tweeted: “We love you. You’re very special.”

Feinstein added that it was time for golf to be braver with its stance on important social issues, citing the NFL as a sport with a similar reputation for having a largely white, right-leaning fan base, but was starting to embrace its role as a platform for fighting social injustices.

“It’s important for the PGA of America to act swiftly because golf could have done more in response to the deaths this summer of George Floyd and Breanna Taylor and to the Black Lives Matters movement,” Feinstein wrote.

“There are, of course, those who will somehow compare the rioting that was part of BLM this summer, to what happened at the Capitol. We will never defend any type of violence or destruction of property, but there is no comparison here; this was an attack on the United States of America, and it was incited by the President of the United States. It was unique, historic and terrifying.

“In the past few months, even the NFL, with its largely white, right-leaning fan base, has publicly supported players who have chosen to protest and has conceded that its handling of Colin Kaepernick in 2016 and the anthem protests of 2017 merited an apology.”

” … Golf, as a sport, has been embarrassingly quiet in the seven-plus months since Floyd’s death. This is the time for the sport’s leaders to speak up and take tangible actions. It needs to start with PGA of America CEO Seth Waugh saying, “We are looking today for a new site for the 2022 PGA Championship.”