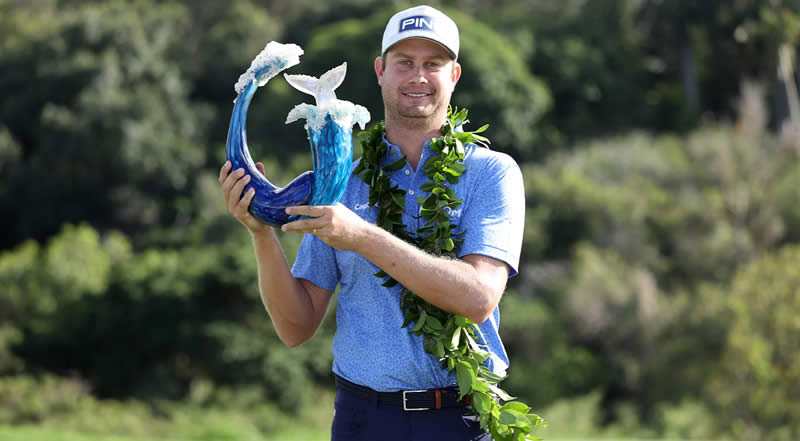 Harris English was more than seven years removed from his most recent PGA Tour title as he stood 268 yards from the pin after a big drive on the par-5 18th hole in Sunday’s final round of the Sentry Tournament of Champions.

A birdie from there would force a playoff with Joaquin Niemann. An eagle would end his victory drought and be the highlight of a long climb out of golf’s abyss.

And then missed his putt.

But his tap-in birdie forced a playoff with Niemann and 15 minutes later at the Plantation Course in Kapalua, Hawaii, English faced a six-foot putt for birdie on the same hole to once again end his drought.

English, who lost his playing status on the PGA Tour after the 2018-19 season when he didn’t record a single top-10 and fell to No. 369 in the world, is now thinking about making the Ryder Cup team and winning a major championship.

English, 31, who finished regulation at 25-under-par 267 with rounds of 65-67-66-69, was emotional after he secured his third PGA Tour title and continued a solid stretch of golf that was just missing an official victory (he did team with Matt Kuchar to win last month’s unofficial QBE Shootout). 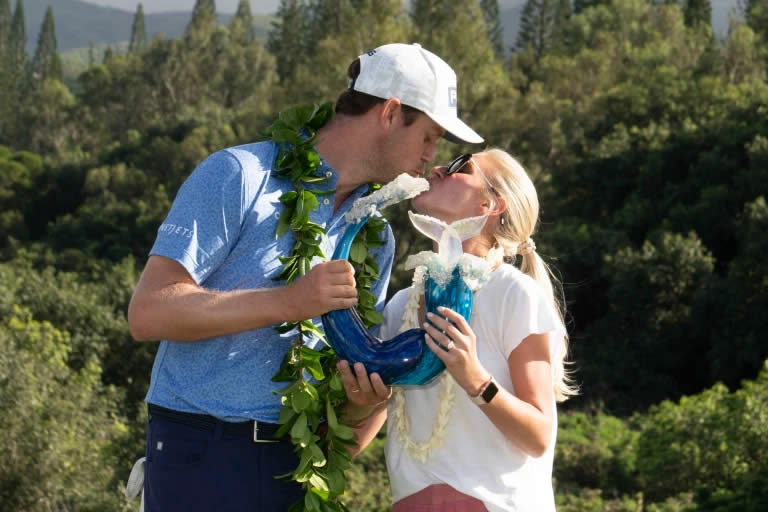 “I built a great team around me back at Sea Island (Georgia),” English said. “They pushed me, helped me get to where I am right now. Nobody’s ever given up. It feels amazing. All the hard work that has gone into this, all the highs and lows of golf that it brings over a career and I feel like I’ve gotten out of my valley and getting back to the tournaments and some of the quality of golf that I know I can play. And it feels great to have some validation out there on the golf course.

“I like where my golf game’s going. It’s been an awesome ride so far and it’s awesome to get some validation like today.”

Niemann was disappointed at the end but was a storm all by himself when high winds finally arrived at the Plantation Course for the final round. Starting the day five shots back, Niemann, the youngest player in the field at 22 and the only player from Chile to win on the PGA Tour (he won the 2019 Military Tribute at The Greenbrier), charged up the leaderboard with six birdies on the front nine and then took the lead with a birdie from 10 feet on the 11th. He grabbed a two-shot lead with a birdie from 10 feet on the 14th but he couldn’t birdie the par-5 15th, the par-5 18th in regulation or the 18th in the playoff.

He had a six-footer for birdie on the 18th in regulation that would have won him the tournament but pulled it and missed. In the playoff, he couldn’t get up and down out of thick greenside rough.

“If you asked me at the beginning of the round I’m going to be in a playoff, I would probably take it, but, yeah, the way I was playing the whole week and the way I played today, and then I just look back and I see those two par-5s I made par. I mean it is what it is,” said Niemann, who finished with rounds of 69-67-67-64. “I played awesome the whole week, especially today. One of my best rounds. I just look back to 15 and 18 from today, I couldn’t make birdie and I think it was right there. But, just happy and it was close.

“You got to stay positive. I’m playing great.”

Defending champion Justin Thomas made a gallant run on the final day of a troublesome week in paradise with a 66 to finish in third place at 24 under. Thomas, who also won the 2017 Sentry Tournament of Champions, tangled with high, native grass too many times, battled an uncooperative putter throughout the tournament and took a beating for uttering a homophobic slur during the third round that he profusely and sincerely apologized for at the end of the round. 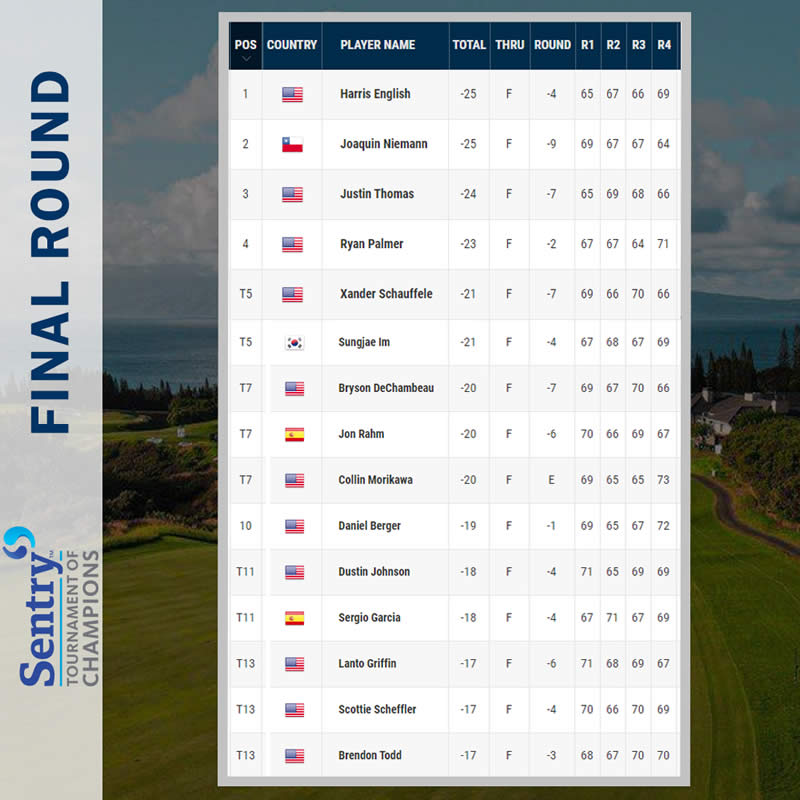 Thomas birdied seven of his first 15 holes in the final round to move within one but missed another birdie chance from eight feet on the 16th, three-putted from 55 feet for bogey on the 17th and, needing an eagle on the 18th to force a playoff, chipped his third shot from 60 feet six feet past the hole and made birdie.

“Golf wasn’t the main thing on my mind,” Thomas said. “Usually being four back going into Sunday I’m thinking about one thing and one thing only and that’s trying to win the golf tournament. But obviously had a lot of other things on my mind last night. I mean, I apologized yesterday. I don’t need to explain myself. I clearly screwed up. I made a terrible, terrible judgment call.

“But I thought a lot last night that, we grow a lot as people over time. I wish that I could learn to grow a different way than the way that I chose to do it, but unfortunately it’s in the past and there’s nothing I can do about it now. It definitely was a distraction out there today. But now I just get to take time going forward and try to become better because of it.

“Golf-wise, I feel great about the start. The golf seemed pretty irrelevant today for me in terms of the mistake that I made yesterday, but in terms of my golf, I love where it’s at and I really feel like that I played well this week.”

Ryan Palmer, who shared the 54-hole lead with English, couldn’t overcome a disastrous double-bogey 5 on the 11th and finished fourth after a 71.

Bryson DeChambeau, who rushed home with four birdies in five holes on the back nine and then eagled the 18th, shot 66 to share a tie for seventh with world No. 2 Jon Rahm (67) and reigning PGA champion Collin Morikawa (73).

World No. 1 Dustin Johnson closed with a 69 and finished in a tie for 11th.

Par took a beating, especially the first three rounds, and every one of the tournament-record 42 players in the field finished 72 holes under par.

No one finished lower than English, who made it to Hawaii when the PGA Tour expanded the Tournament of Champions field due to the COVID-19 global pandemic that shut down the tour for three months. Winners and those who made The Tour Championship made it to Maui. And English took advantage.

But he was able to birdie the 18th to force the playoff.

“I knew I needed to make a run,” when he got to the 11th tee, he said. “That back nine lends itself to some birdies. I knew I needed to get it rolling, and that putt on 11 kind of opened the flood gates and then I could start seeing everything go in and you get some momentum and you can do anything.”

He’s been feeling that way for some time. His team in Sea Island, especially his swing coach, Justin Parsons, have slowly helped English rebuild himself. He had won twice in 2013 but then started thinking about swinging like Dustin Johnson or Rory McIlroy or Tiger Woods and others and got lost.

Parsons and his team got him back to trying to be Harris English again. In his last 27 starts, he has 11 top-10s – eight inside the top 6, including a tie for sixth in the U.S. Open. He will move into the top 20 in the world rankings.

“I know how hard it is to win out here on the PGA Tour and I knew that if I kept giving myself opportunities to pull it off that I could do it. I’m still not satisfied with where I’m at in the game, there’s still a lot more that I want to accomplish.”