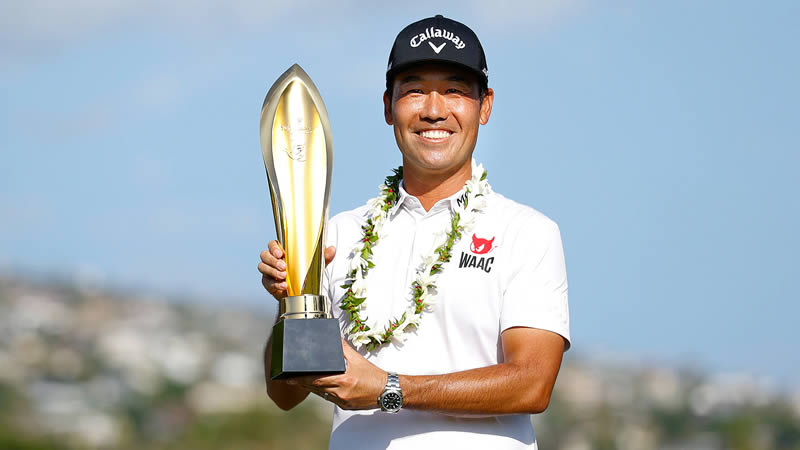 Kevin Na was nearly forced to withdraw from the Sony Open in Hawaii for the third straight year when he felt pain in his ribs on Wednesday. He’d missed the previous two iterations with neck and finger injuries after arriving on site.

This time – with the help of his traveling trainer – the 37-year-old battled on, and by Sunday afternoon, he was tapping home a final hole birdie to claim his fifth PGA TOUR win.

“On Wednesday morning warming up in the Pro-Am and I hit one hard and I pulled my rib, and I didn’t know what to expect… I was like here we go again,” Na revealed.

“My trainer that I just added to the team, Cornel Driessen, he helped me out a lot. We worked on it, loosened it, and the next day I woke up, it felt great and felt like nothing happened. Had he not been here, I don’t know, might have been a different story,” Na revealed.

It’s been an incredible run for the Korean American who has now won in the last four TOUR seasons, joining Dustin Johnson, Jon Rahm, Justin Thomas and Bryson DeChambeau as the only players to have a similar active streak going. He has surged to 10th in the FedExCup standings and jumped to 23rd in the world rankings. It also marks four wins in 55 starts after he managed just one win in his first 369 starts.

“It feels great. It’s great to get off to a good start this year and get back in Maui (next year). It’s just all positives. But I’d like to win another one before the season’s over,” Na said.

“I used to be a really consistent player, a lot of top 10s, a lot of made cuts. Winning was still important then but winning felt a little bit distant to me. I knew I could do it; I’ve done it before… but I went so many years without winning that I kind of forgot that feeling, and when I validated it at Greenbrier, it made me hungry for more.

“(So) I think experience is the reason why I’ve been winning. Experience and confidence. When you do it again, it seems like the next one comes easier. All this time waiting is paying off right now.”

It really wasn’t that easy. Na walked off the 12th hole on Sunday after a bogey to be three shots back of Brendan Steele’s lead. It appeared as if he’d let his chance slip. But perhaps mindful that Steele had let a similar lead go at Waialae Country Club a year ago, he failed to give in.

There was an immediate response as he rattled off three birdies in a row to surge back into the mix and came to the par-5 18th hole knowing a birdie would secure either a win or perhaps a spot in a playoff at worst.

He smashed a 5-wood out of the rough that skirted past the pin and ran through the green, but made no mistake with his pitch back, ensuring his well-earned victory after last ditch eagle attempts from Steele and Joaquin Niemann failed to fall.

“I was playing maybe a little bit more aggressive coming down the stretch, not worrying so much about second or third. Every year, I hope to win, and I expect to win, on the right golf courses,” Na added.

“Sometimes that adds a little bit more pressure but it’s just a mind-set that when you go in, hey, look, if things go well and I play well, I’m going to have a chance.

“The goals now are to be Top-20 in the world before the year is over, contend in a major, and obviously make it to TOUR Championship and The Ryder Cup.”

Niemann was runner up for the second week running in Hawaii – the 22-year-old Chilean lost in a playoff at the Sentry Tournament of Champions and fell one short in Honolulu. The only comfort left for the guy who was 41-under through the last eight rounds was a move to third in the FedExCup and a boost to 25th in the world rankings.

Chris Kirk also fell a shot short while Steele was left to swallow the bitter pill of defeat for the second year running despite holding a healthy late lead. He joined Marc Leishman and Webb Simpson two shots off the pace. Leishman’s T4 represented his first top 10 finish since the TOUR went on COVID 19 hiatus last March and comes just two weeks before his title defense at the Farmers Insurance Open.

Jon Rahm Explains why he Withdrew from The American Express