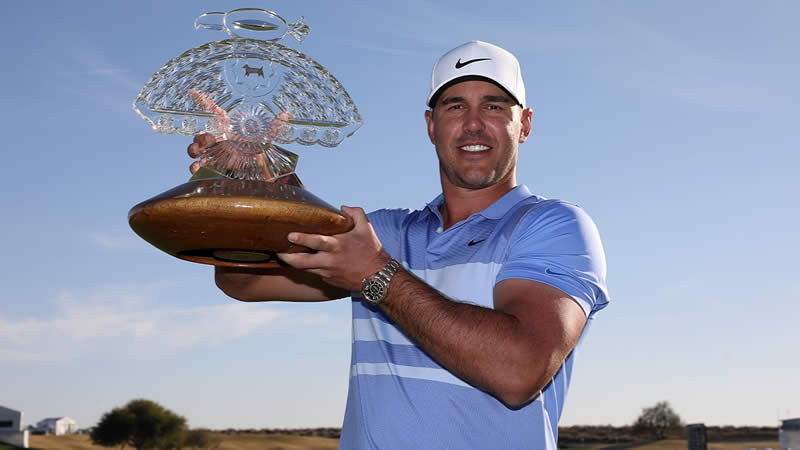 After three straight missed cuts, Brooks Koepka bounced back with a brilliant come-from-behind win as he clinched a one-shot victory at the Waste Management Phoenix Open in Arizona

Brooks Koepka upstaged Jordan Spieth and Xander Schauffele as he produced a spectacular finish to win the Waste Management Phoenix Open for the second time.

Koepka arrived at TPC Scottsdale on the back of three consecutive missed cuts after battling a knee injury for most of 2020, but he stormed back into the winner’s circle with a brilliant, closing 65 – his first victory since the WGC-FedEx St Jude Invitational in July, 2019.

Spieth and Schauffele were tied for the lead overnight and three clear of the chasing pack, but both struggled from the outset and actually found themselves three behind as early as the eighth hole after James Hahn surged to six under for the day at the 10th.

But Hahn buckled under the pressure of leading and his game suddenly deteriorated, dropping his first shot in 50 holes at the 11th, driving into water at the 13th and finding the drink again with his poorly-struck second to the long 15th as he plummeted back down the leaderboard.

Playing partner Koepka, however, moved rapidly in the opposite direction to Hahn after being just one under for the day after 12 holes and seemingly too far back to contend despite the troubles of Spieth and Schauffele in the final group. 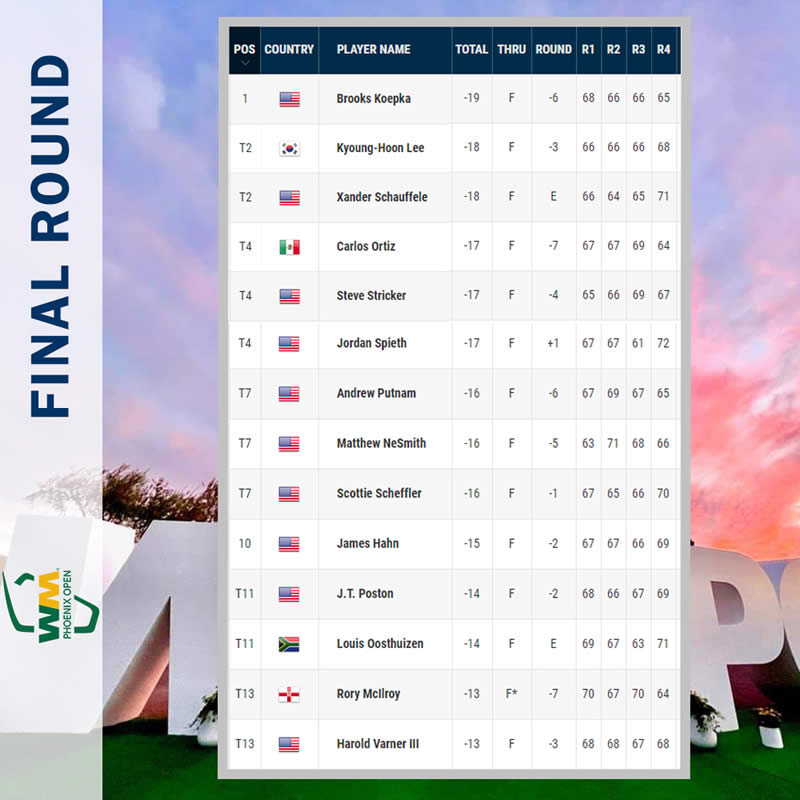 Koepka was suddenly tied for the lead after birdies at 13, 14 and 15, and he then enjoyed a moment of magic at the risk-reward 17th as his safe tee shot pulled up short of the green, but it mattered little as he pitched in for an outstanding eagle-two that lifted him into the outright lead.

A cast-iron par at the last set the clubhouse target at 19 under, and Schauffele got to within one when he knocked a wedge to seven feet at the intimidating 16th and converted the chance for only his third birdie of a difficult day.

But he and Spieth then pulled their drives into the water at the penultimate hole, and Schauffele’s bogey left him needing to hole his second shot at the last to force a playoff with Koepka.

That proved beyond the world No 4 as Koepka celebrated his eight PGA Tour victory at the scene of his first, having pipped Bubba Watson and Hideki Matsuyama to the title back in 2015.

“My game has been in really good shape,” said Koepka, who insisted he had been happy with his form despite missing the cut in his last three starts. “I really like the way I’ve been playing, so I just had to stay patient.

“I felt like we got through the par-three 12th and Ricky (Elliott, Koepka’s caddie) told me I was still right in the thing, so I just needed to make some putts. It felt like things were starting to open up because I was hitting it well.
“I’m very pleased, very happy. It’s been a wild ride for the last year and a half and very frustrating. I’ve had moments where I didn’t know if I was going to be the same, if I could even come back. A lot of hard work has gone into this, and I’m actually really proud of myself.”

Kyoung-Hoon Lee vaulted into second place after a solid four-birdie 68 which got him to 18 under and one behind Koepka along with a deflated Schauffele, who valiantly birdied the last to salvage a level-par 71.

Spieth, who lit up the tournament with his sensational 61 on Saturday, matched Schauffele’s birdie at the 18th as he carded a 72 to finish tied for fourth with Carlos Ortiz (64) and veteran Steve Stricker.

Spieth was three over for the day before picking up his first birdie at the long 13th, but he tugged his drive at the 15th too far left and lost another ball which effectively ended his challenge for a first win since The Open in 2017.

US Ryder Cup captain Stricker would have been delighted to have a front-row seat watching Koepka go about his business on Sunday, although the 53-year-old was not far behind his playing partner as he birdied four of the last six holes for a 67 and a highly commendable 17 under for the week.