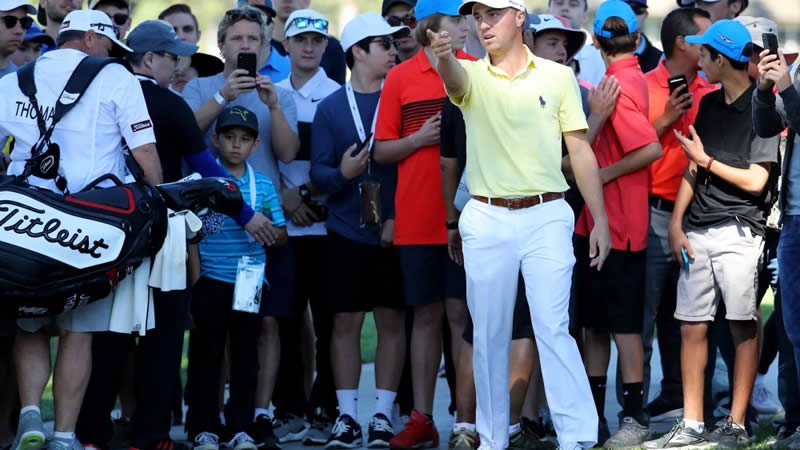 The amplification of gambling in the sports space seems to get bigger and bigger on a month-to-month basis. In the golf space, the latest venture was the debut of a live betting show produced by NBC Sports and the PGA Tour at the Waste Management Phoenix Open.

Justin Thomas, a member of the PGA Tour Player Advisory Council, was asked about this live show earlier this week. Though Thomas is a noted sports fan, he vocalized some valid concerns about the expansion of betting in relation to on-site gamblers’ actions at golf tournaments.

“Obviously as a player, selfishly, I worry about any sort of sketchiness going on with whether it’s communication within someone that’s out on the grounds and could potentially yell or do something to affect a person that would have, say, a wager or something and that’s a serious, serious concern,” the 27-year-old told reporters earlier in the week in Phoenix.

“We’re out here playing—this is our job and we’re out here trying to win golf tournaments and a lot of people are supporting families and supporting themselves. I would hope it would never come to that.

“But at the end of the day you can’t sit there and tell me that that’s not a realistic chance.”

Thomas’ concern is a legitimate one and undoubtedly has come up in PAC meetings as players discussed the PGA Tour’s aggressive embracing of the sports betting category. The tour now has deals with some of the biggest sportsbooks, including DraftKings, FanDuel, PointsBet and BetMGM, and the BetCast show on Peacock Premium is the latest innovation the tour has rolled out since 2018 when the U.S. Supreme Court overturned the Professional and Amateur Sports Protection Act of 1992, which legalized sports betting.

In a 2020 article in Golf Digest, we asked Norb Gambuzza, the PGA Tour’s senior vice president of media and gaming, about the situation that Thomas presents concerns about. After all, what’s to stop someone who bet A LOT of money on a certain player yelling in the backswing of another player to influence their own bet? That could have devastating effects on a golf tournament.

Gambuzza pointed to the PGA Tour’s preparations for security measures on-site—even extending to possible proximity restrictions if you’re on tournament grounds. In other words, at a PGA Tour event in a state where mobile betting is allowed (i.e. The Northern Trust at Liberty National in New Jersey), there could be ways to limit fans from placing bets on-site to remediate such concerns.

“We talk with players with frequency on the subject,” Gambuzza said. “They’re obviously curious about what we’re doing in this space, as are all golf’s stakeholders. I would characterize the players’ position on how we’re approaching it as they’re content with our policies and procedure on it. Everybody’s focused on and sensitive to what’s happening in this space.”

Thomas’ concerns are another reminder of how professional sports organizations must continue to develop and think about their policies on an ongoing basis, as the sports-betting space evolves rapidly.