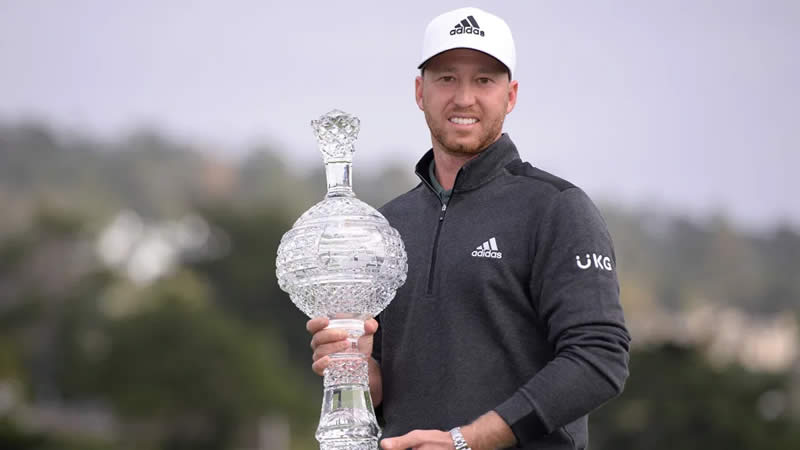 On Saturday in the third round of the AT&T Pebble Beach Pro-Am, Daniel Berger was tied for the lead when he pumped his tee shot out of bounds on the iconic, picturesque par-5 18th at Pebble Beach and left the grounds with a sour taste in his mouth and two shots out of the lead.

On Sunday in the final round, Berger, needing a birdie to win or a par to force a playoff, split the fairway with a 276-yard drive on the 18th, knocked his approach from 250 yards onto the green with a 3-wood, slammed the door on the tournament by sinking a 30-foot putt for eagle and left the grounds with the championship hardware.

The closing big bird under grey skies polished off a 7-under-par 65 and left Berger at 18 under and two shots clear of Maverick McNealy (66) and three clear of Patrick Cantlay (68) and 54-hole leader Jordan Spieth (70). Paul Casey (68) and Nate Lashley (69) tied for fifth.

“I feel like I got a little bit of revenge on the 18th,” said Berger, who won the Charles Schwab Challenge in June when the PGA Tour returned after a 13-week break due to COVID-19. “I knew it was going to be a tight finish and I just stepped up there and hit a great drive and hit maybe the best 3-wood I’ve ever hit in my life and the putter was just kind of icing on the cake.

“It’s so hard to win out here. I feel like everything has to come together to win and I was able to do that this week. I’m just trying to get better in every aspect of my game and I feel like I’ve accomplished that, and I’ve set some really high goals and I feel like I’m not scared to put in the work. I’m not the most talented guy out here.

“I don’t hit it the furthest, but I’ll outwork anybody.”

Berger, who moved to 13th in the official world ranking, won his fourth PGA Tour title with rounds of 67-66-72-65. He also eagled the second from seven feet and made four birdies to offset a lone bogey on the eighth hole. 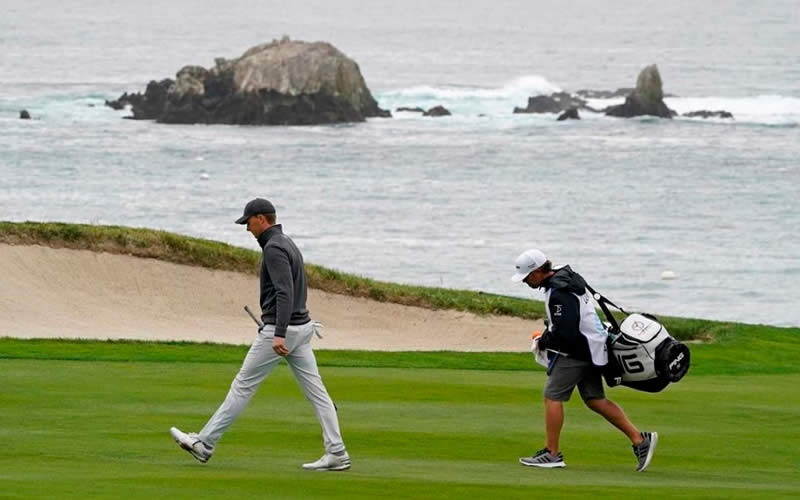 Spieth came up painfully short of ending his winless streak that dates to the 2017 British Open for the second consecutive week. Last week in the Waste Management Phoenix Open, Spieth had a share of the 54-hole lead but shot 72 in the final round and fell back into a tie for fourth.

“I’m as confident as I’ve been in a long time,” Spieth said. “Not only the current outlook but also looking forward. So it’s still mechanics. It’s still dragging on. It’s still going too long and therefore getting late into the ball and I made some really, really good swings this week under pressure and I made some not so good swings under pressure and there were more good ones than there were last week.

“So as I go into next week at arguably my favorite golf course in the world, at Riviera (for the Genesis Invitational), I look to have more swings that I know are getting into position, hitting the spots I know that I can kind of turn and burn from than I had this week.”

Berger is brimming with confidence. He’s carried a chip on his shoulder for years now, an underdog not shy to fight, if you will. But a lingering wrist injury hindered him through the past few years and threatened his career. Just a little more than a year ago, he was ranked 152nd in the world and in one stretch went nearly 18 months without a top 10. There were some dark moments, and then a very important moment of enlightenment.

“When I was hurt, I thought, man, I’m never going to be able to play golf again without feeling like I was going to be hurt and not be able to do the things I know I needed to be able to do to prepare and play my best golf,” Berger said. “I thought I didn’t really love the game until it was taken away from me for three or four months and then I was really sad. I think I was a bit lucky to have the team of doctors that I had to really get me back to a 100 percent.

“Now it’s a nonissue. I never think about it. It never bothers me and it’s really something that I can put behind me in the past.”

Going forward, he’ll start circling the dates of the AT&T Pebble Beach Pro-Am on his calendar. Berger’s team has been telling him for years he should play this annual gathering on the Monterey Peninsula more often. Whether it was scheduling or injury, Berger only came to the area twice before this year and made the most of each visit – a tie for 10th in 2015 and a tie for fifth in 2020. In 12 rounds in the tournament, he’s broken par 11 times.

“I love Pebble Beach. Every time I’ve ever played it I wonder why I don’t come back more often, and this year was, I knew I was going to play it. I set it on my schedule early. It’s just a special place. Every time you step up to the tee, you tend to take in the sights and sounds and don’t really focus on the golf as much and I think that’s kind of helpful for me.

“I’ll be back here many, many years. It’s one of my favorite events of the year.”