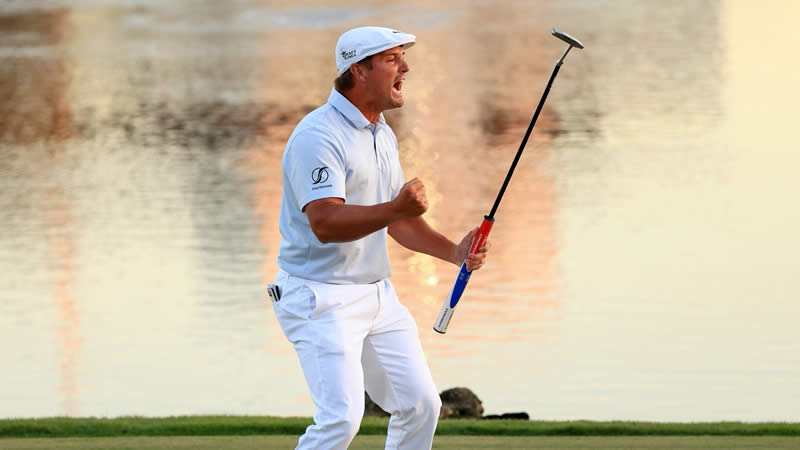 Bryson DeChambeau received a text message Sunday morning from Tiger Woods to keep fighting, good advice for a final round that turned out to be the toughest at Bay Hill in 41 years.

Inspiration from Arnold Palmer is everywhere, and DeChambeau was particularly drawn to the King’s motto to play boldly.

DeChambeau needed every bit of that Sunday to win the Arnold Palmer Invitational presented by Mastercard, playing the final 17 holes without a bogey, entertaining thousands with another monstrous drive over the water and delivering one last par with a 5-foot putt on the final hole for a one-shot victory over Lee Westwood.

He looked dapper in his tam o’shanter cap and red cardigan sweater that goes to the winner.

“I think this red cardigan is not only for Mr. Palmer, but I would say it’s a little bit for Tiger, as well, knowing what place he’s in right now,” DeChambeau said.

Woods, recovering from serious leg injuries from his single-car crash in Los Angeles two weeks ago, would have witnessed quite a show in blustery conditions, fast fairways and greens so quick they looked almost white.

DeChambeau closed with a 71, matching the low score of the final round in which no one broke 70 on Sunday at Bay Hill for the first time since 1980.

Westwood, who turns 48 next month, was up to the task.

Never mind that DeChambeau’s rocket over the water on the 565-yard sixth hole was 168 yards beyond Westwood. Their second shots were only 6 feet apart and both made birdie. 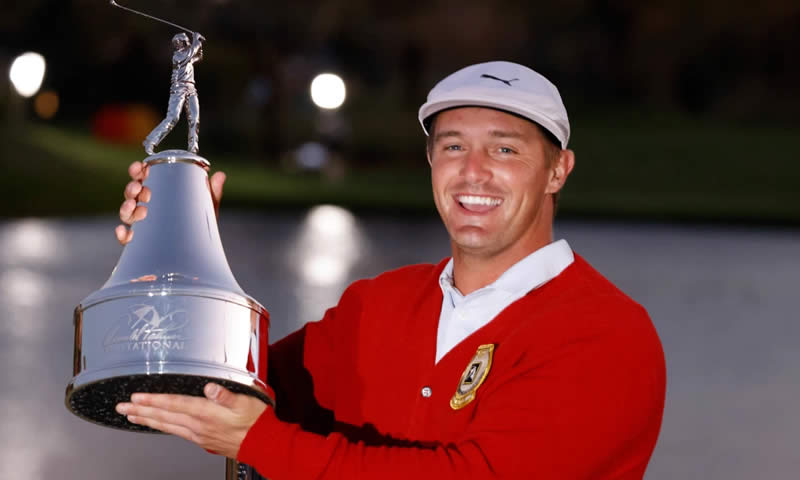 Westwood fought to the end. He fell out of a share of the lead with a three-putt bogey from 40 feet on the 14th. Just as critical was failing to make birdie on the par-5 16th with a wedge for his second shot from the fairway, and DeChambeau having to scramble for par.

“You can’t want for more than that. I thought we had a really good battle,” Westwood said. “It was never really more than one (shot) all day, and there were tough conditions out there. It was a day for playing sensible and hanging on.”

They were never separated by more than one shot over the final 15 holes. DeChambeau finished at 11-under 277.

The long ball came in handy for DeChambeau, as much with the putter as the driver. He holed a 40-foot birdie putt on the fourth hole to regain a share of the lead. More critical was the 50-foot par putt he made on No. 11 to stay one ahead.

“Knowing what I know now, it’s obviously the shot of the day for me,” he said.

Westwood tied him with a 30-foot birdie putt on the par-5 12th, only to give it back with a three-putt on the 14th. The tournament turned on the par-5 16th, where it was Westwood who had the advantage.

DeChambeau’s drive went up against the lip of a bunker and he had to lay up short of the water. Westwood had 158 yards and hit a poor wedge that came up short of the green. He chipped nicely, except that it rolled out 6 feet by the hole on the lightning-quick greens and he missed the birdie for a chance to tie.

DeChambeau took the one-shot lead to the 18th and hit his most important drive of the day — in the fairway. Westwood’s tee shot settled in a divot, and he did well to get it on the green and two-putt from 65 feet. DeChambeau’s birdie putt slid by some 5 feet and he shook his arms in celebration when the par putt dropped. 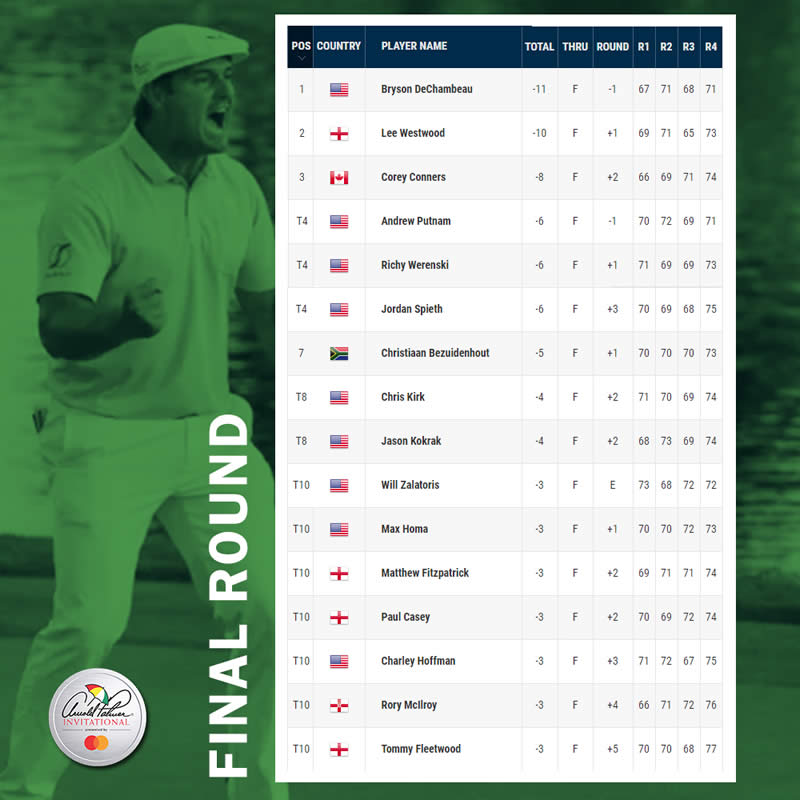 Westwood closed with a 73, not a bad score considering the average of 75.49 was the highest for a final round since 1980.

Corey Conners stayed in the mix until the very end. The Canadian holed a 15-foot eagle putt on the 16th to get within one shot, only to find a bunker on the par-3 17th and miss a 6-foot par putt. With a bogey on the final hole, he shot 74 to finish alone in third.

Jordan Spieth was part of a four-man race on the front nine and briefly tied for the lead with a birdie on the par-5 sixth. That turned out to be his last birdie of the day. He took bogey on three of his last four holes for a 75, dropping him into a three-way tie for fourth with Andrew Putnam (71) and Ricky Werenski (73).

For Spieth, it was his third top-five finish in his last four events.

DeChambeau rose to No. 1 in the FedExCup standings with his eighth PGA TOUR victory, and he became the first player this season with multiple victories, to go along with his U.S. Open title in September. It matched the longest it took for a multiple winner on the PGA TOUR since 1969. Nick Price won his second title in the 21st week of the season in 1994.

Rory McIlroy, who started four shots out of the lead, was never in the mix. He came undone on the par-5 sixth, where he hit two tee shots into the water and then hit the fairway, green and made the putt to salvage double bogey. He shot 76.