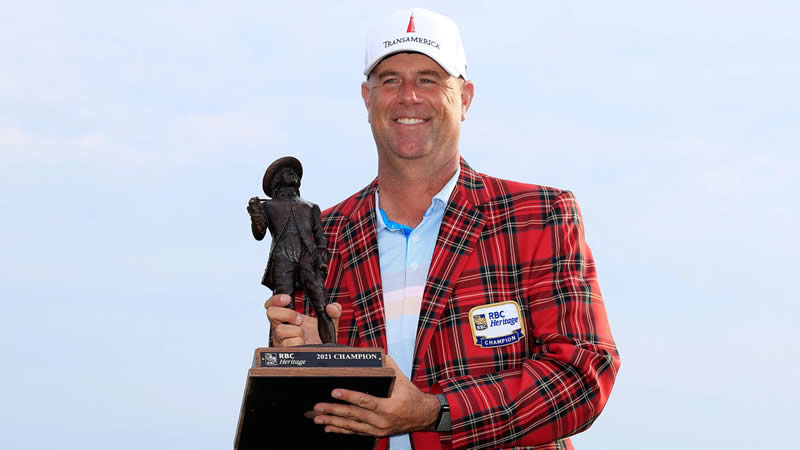 Stewart Cink’s clutch birdie at No. 17 is Shot of the Day

HILTON HEAD ISLAND, S.C. – Stewart Cink has seen a lot, but at 47 he doesn’t always remember it, something he readily jokes about on Twitter.

At the RBC Heritage at Harbour Town, he shot the fur off the course (a favorite Cink-ism) with twin 63s and then hung on over the weekend. His final-round 70, on a day when no one got closer than three strokes, got him to 19 under par and left him four clear of runners-up Emiliano Grillo (68) and Harold Varner III (66).

What made this, his eighth win, stand out?

“The fact that it happened at my age,” he said.

But also, he added, the friends and family who were there to celebrate with him.

Cink, who is the second two-time winner on TOUR this season after Bryson DeChambeau and moves from 26th to third in the FedExCup standings, celebrated the win with wife Lisa and their sons, Connor and Reagan (also Cink’s caddie), plus Connor’s fiancé and several friends.

“Everything in between the shots,” Reagan said, when asked what he will remember about the win—his second with his dad this season. “Walking down the fairways, hanging out. We talk and we plan the shots and we’ve got a good system, but it’s just like the time we get to spend joking around walking down the fairway, it’s awesome. It’s the best. It really is.”

What’s gotten into Stewart Cink? He talks about the importance of his team, and attributes his comeback season partly to his new trainer Cornel Driessen. With Driessen’s help, the veteran pro — Cink won the 1997 Travelers Championship the year Collin Morikawa was born — has actually gained distance despite being on the doorstep of PGA TOUR Champions eligibility. 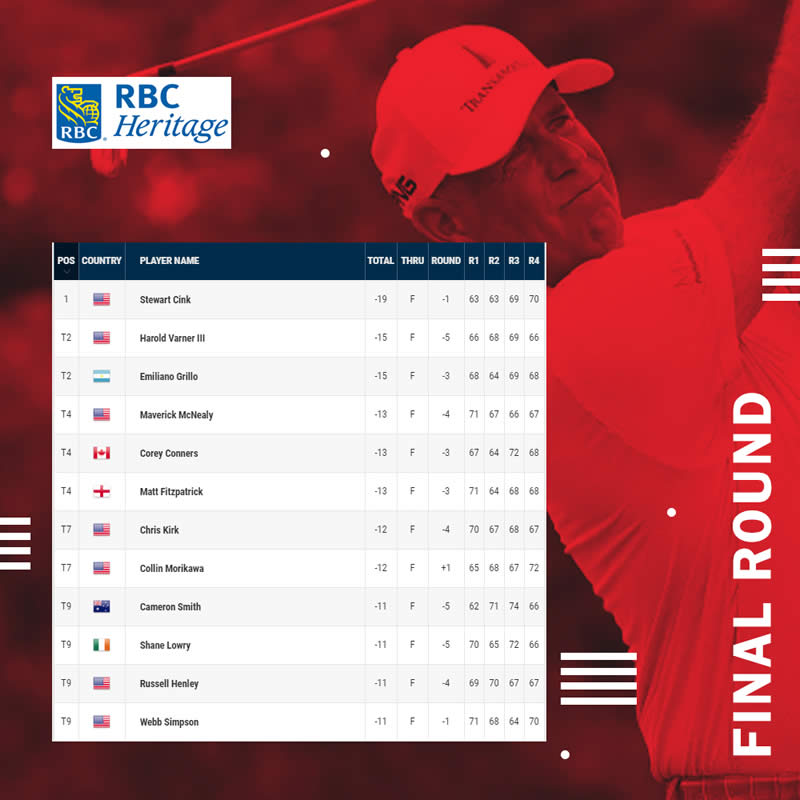 Cink was 144th in the FedExCup and 300th in the world after he missed the cut at the Wyndham Championship to end last season. He made a few equipment changes, became more efficient, and with Driessen gained so much strength and mobility he began to adopt a whole new style of play.

“I was able to really kind of change my game into a little bit more of a power game,” he said.

But nowhere was the change to Cink’s team more evident than with the guy carrying his bag as he won the season-opening Fortinet Open in Napa last fall — his first win in over 11 years.

Despite all that their arrangement was supposed to be temporary; Reagan, 23, is a newly minted Georgia Tech graduate (industrial engineering) who has been working in the flight operations department for Delta Airlines. He’s a scratch handicap and has his own life to lead.

“The traveling and living in a circus out here like I’ve done for my whole adult life is made tolerable by being a player,” Cink said at the Sanderson Farms Championship last fall, when he and Reagan agreed that it would take a top-five finish for them to keep going (Cink finished T12). “If you’re playing, you’re kind of the top level of the wedding cake out here.”

Cink went back to his main caddie, Kip Henley, and opened with scores of 67-63 at the Shriners Hospitals for Children Open in Las Vegas. “I was like, it doesn’t matter who caddies for me right now, I’m just killing it!” Cink said Sunday with a laugh. Then he shot 70-81 on the weekend.

He reunited with Reagan at the Bermuda Championship, but not for obvious reasons. Cink said Bermuda was going to be hard to get to and gave Henley the week off — and then finished T4 with his son back on the bag. Stewart and Reagan now seemed like too good a team to break up.

“Our flight out of Bermuda was on Monday afternoon at like 3 p.m. because there weren’t any flights at the time because of COVID, so we had a long time to sit around the hotel room,” said Cink, the second oldest Heritage winner (Hale Irwin, 48). “Lisa was there, Reagan was there, and that Monday in the morning while we were waiting for our flight, we had a big team pow wow.”

Cink told Reagan he wanted him on the bag at the Masters. Then he reconsidered.

Reagan was supposed to start work in two days but called his team. Stewart, though, went straight to the top, placing a call to Delta CEO Ed Bastian — a friend, as luck would have it.

“I didn’t ask Ed to do anything,” Cink said. “I just said, ‘Ed, if you were me, what do you think you would do?’ And he’s got grown daughters and I’ve got sons, and he said, ‘Stewart, this is the opportunity of a lifetime.’ I don’t think Ed would mind me quoting him. He said, ‘We love Reagan. We think Reagan is going to work at Delta for 40 years.

“We don’t think waiting one more year is going to hurt, so let him caddie.’”

Reagan, who is engaged to be married July 31st, will caddie for his dad through the FedExCup Playoffs. “And then I’ll be back on the caddie market or maybe retire,” Stewart said with a laugh.

Not that anyone would let him. The best comeback story of this season just keeps getting better.