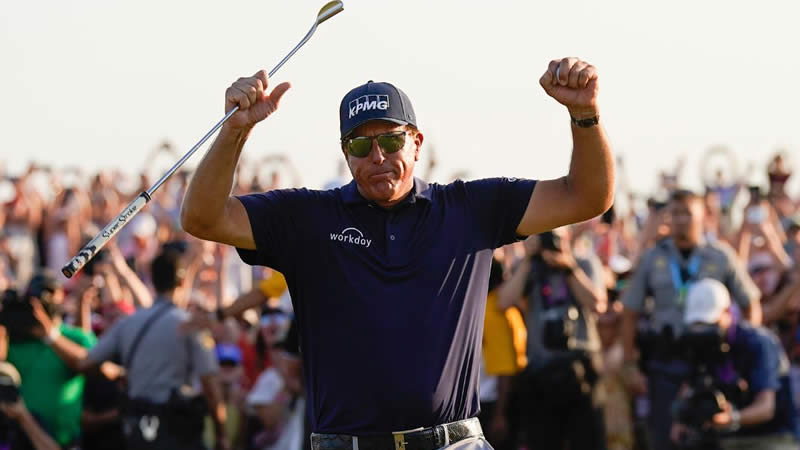 Phil Mickelson minted golf history on Sunday, becoming the oldest winner of a major tournament with his victory at the 2021 PGA Championship.

He finished two shots ahead of Brooks Koepka and Louis Oosthuizen at Kiawah Island’s Ocean Course, following an excellent final round performance, finishing six-over for the tournament.

In winning at aged 50, Mickelson surpassed the record previously held by Julius Boros, who won the PGA Championship in 1968 at age 48.

The victory is the sixth major title of Mickelson’s long and storied career, with his previous PGA Championship coming 16 years ago in 2005.

With his brother, Tim, as his caddie, Mickelson was able to complete a remarkable comeback story, one which he hopes can inspire others.

“This is just an incredible feeling because I just believed that it was possible but yet everything was saying it wasn’t. I hope that others find that inspiration,” he said in his post-round conference.

“It might take a little extra work, a little bit harder effort to maintain physically or maintain the skills, but gosh, is it worth it in the end, and I’m so appreciative to be holding this Wanamaker Trophy.”

The path to victory

Heading into the final day with Mickelson just a shot ahead of Koepka, the competition tightened up even more in the early holes of Sunday’s round.

And a bogey for Mickelson and birdie for Koepka on the opening hole tied the scores up, with 17 holes standing between the pair and the famous Wanamaker Trophy.

The pair went back and forth, exchanging birdies, pars, bogeys and the odd double bogey, during the first four holes, with little to separate the pair.

But the Mickelson magic that fans have come to love over his career really began to emerge on the par-three fifth hole.

In a bunker off of his tee shot, the American golfer chipped into the hole, sending the watching spectators into a rapture and giving them reason to believe that history could be in the making.

And after a bogey on the sixth, Mickelson’s resolve seemed to strengthen, and he looked to be having the time of his life.

While Koepka’s confidence seemed to drip away hole by hole, Mickelson only got better, birdieing two and picking up pars on the next six holes. 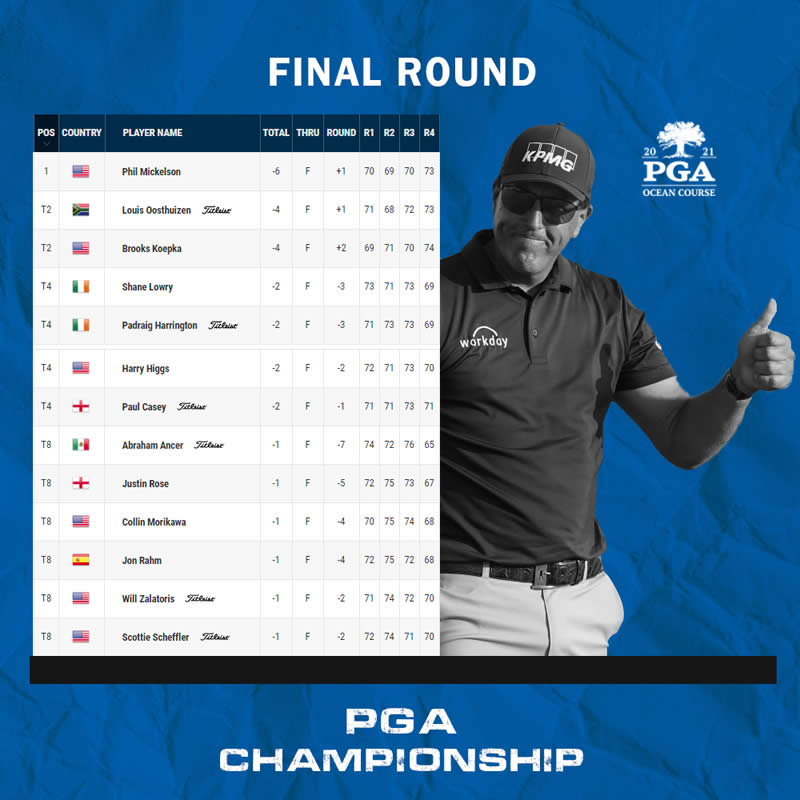 There was still time for one heart-in-mouth moment for Mickelson, with his second shot on the 13th dropping into the water. However, after a few errant shots from Koepka, he wasn’t made to pay the price with both players bogeying the hole.

On the next hole, Mickelson’s tee shot left him a trick chip onto the green. And it cost him, as he picked up consecutive bogeys, reducing the gap between him and Oosthuizen to just three.

And just when all the pressure was on — in the group ahead, Oosthuizen’s birdie reduced the gap to two shots — Mickelson produced a 366-yard drive on the 16th hole, the longest drive on that hole by any player all week.
It resulted in an all-important birdie, once again stretching his lead to three shots, which nervously was reduced to two, moments later.

In an amazing scene on the final hole, however, surrounded by thousands of fans and bathed in sunlight, Mickelson two-putted his name into the history books.

For Koepka, who was seeking his third PGA Championship title in four years, struggles with his putter were the decisive factor that held him back.

And although he pushed Mickelson all the way, the four-time major winner described being “super disappointed” and “pretty bummed” in the immediate moments after the final round.

“I’m not happy. I don’t know if there’s a right word I can say on here without getting fined, but it hurts a little bit,” he told the media in his post-round press conference.

“It’s one of those things where I just never felt comfortable over the putts. I don’t know why, what happened.”
The story of Mickelson’s win — and his age — is already resonating with many.

Heading into the PGA Championship, Mickelson was most likely very far away from people’s favorites to win.
After the first round, he sat amongst the leaders, just three shots off Corey Conners at the top.

But he made moves after that, finishing Friday and Saturday atop the leaderboard.

In winning at 50, he breaks Boros’ record of 48 years, 4 months, 18 days of the oldest major winner in golf’s history. Golf legend Jack Nicklaus won his last major at 46.

After his record-breaking achievement, Mickelson’s brother Tim — whom Phil credited with helping him have fun this week — said keeping him relaxed was key to his success.

“I just told him to stop thinking so much. When he would get ahead of himself, I reminded him, “Hey, we’ll worry about that when we get there,'” he said in his press conference. “A few stories here and there. Maybe one or two might have been made up, who knows? But anything I can do to keep his mind off of the shot that’s coming up when it’s not even our turn to hit.”