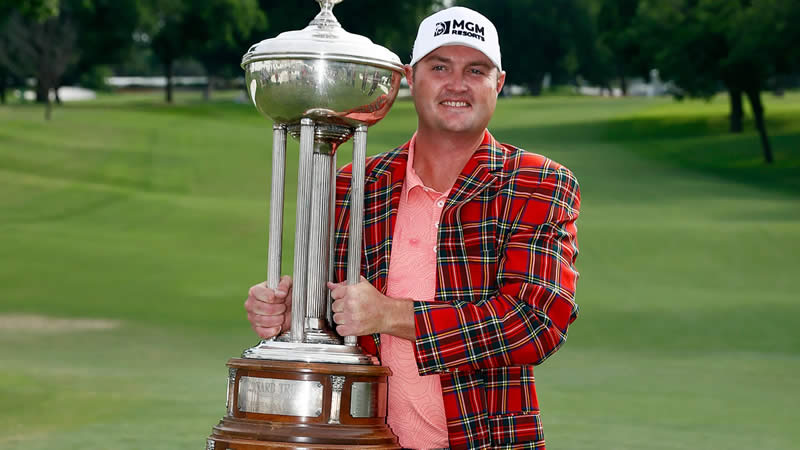 Jason Kokrak played in 233 PGA TOUR events before getting his first victory. The big hitter didn’t have to wait nearly as long to win again, and overcame a local favorite to do it at Colonial.

Kokrak shot an even-par 70 in a final-group showdown Sunday with resurgent Jordan Spieth, winning the Charles Schwab Challenge at 14-under 266. He was two strokes better than Spieth, who hit his approach at No. 18 over the green and into the water.

While even on the day, Kokrak had five bogeys to go with his five birdies. He twice needed two shots to get out of bunkers, and had back-to-back bogeys at Nos. 15 and 16.

But when he struck his final 4-foot putt, he followed the ball to the cup and finally broke into a smile when he pulled it out and celebrated with caddie David Robinson.

A huge crowd followed the only contending group all day, most of them waiting to erupt for Dallas-native Spieth, who started the round with a one-stroke lead before a bogey-filled 73. Instead of his second win at Colonial, he finished as the runner-up at Hogan’s Alley for the third time. It was still Spieth’s eighth top-10 finish in his last 11 starts this year, one more top 10 than he had the previous two seasons combined. 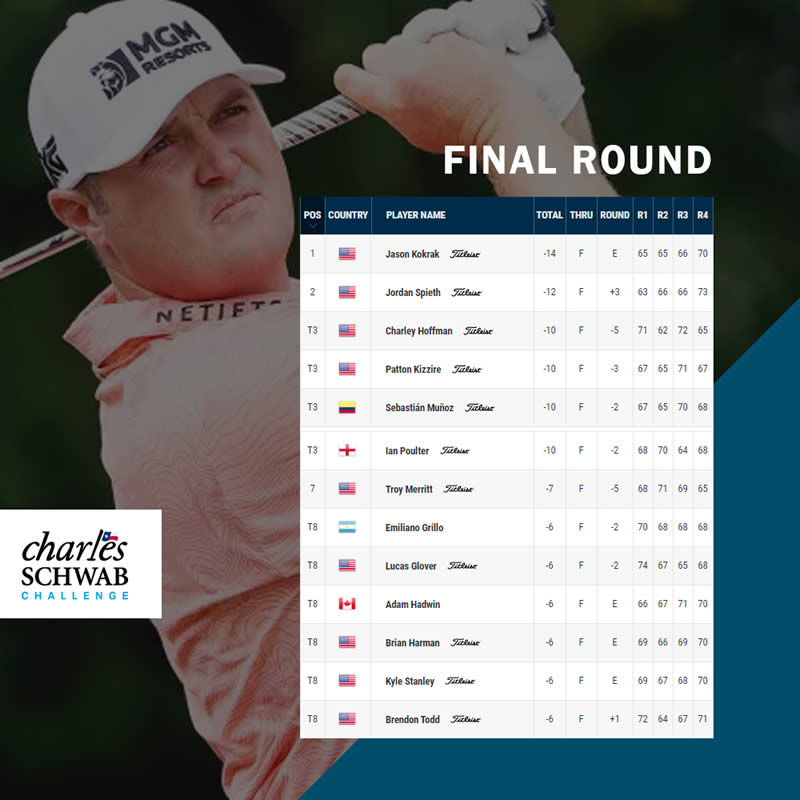 “They were definitely rooting for the guy next to me,” said Kokrak, who tied for third at Colonial last June. “Both of us didn’t have our A-game today. We grinded it out.”

Kokrak, playing in his 16th tournament since winning the CJ CUP @ Shadow Creek in October, became the third player with two PGA TOUR wins this season. He joined Bryson DeChambeau and Stewart Cink in that group.

Charley Hoffman finished in a four-way third at 10 under with a closing 65. He also had a tournament-best 62 on Friday, but that was sandwiched by a pair of over-par rounds (71 on Thursday and 72 on Saturday). Patton Kizzire (67), Sebastian Munoz (68) and Ian Poulter (68) were also at 10-under 270. Troy Merritt was along in seventh at 7 under.

Sergio Garcia was in third place with the final round began, four strokes behind Kokrak and five behind Spieth. But the 41-year-old Spaniard, who got the first of his 11 PGA TOUR wins 20 years ago at Colonial, started with a wayward tee shot and bogeyed the opening par 5, then had had a three-putt for double bogey at No. 3. He shot a 76 and tied for 20th at 276.

Kokrak took the lead for good with birdies at the longest and shortest holes, making a 13-foot putt at the 629-yard 11th hole, an then a 17-footer off the fringe at the 170-yard 13th after a tee shot the came close to going into the water fronting the par 3. Spieth only had two birdies all day, the last with an approach to less than 2 feet on No. 9 that matched them at 14 under going to the back nine.

But Kokrak had quickly fallen two strokes behind after a bogey at the 551-yard opening hole, when his approach went into a greenside bunker and he didn’t get the ball out of there on the first try.

But Spieth, who had only two bogeys in the first 55 holes, then bogeyed three holes in a row — and had two more on the back nine. He went in the right rough and then over the green on both Nos. 2 and 3, then hit into a bunker fronting the difficult 241-yard, par-3 4th. He blasted to six feet, but his par attempt curled around the edge of the cup and he had to tap in for bogey.

Instead of going ahead at No. 4, Kokrak was even at 12 under because of his bogey after driving over the green. But Kokrak took the lead for the first time with a 23-foot birdie putt at the fifth, before both rolled in birdies at No. 6.

Kokrak then had his other bunker trouble, from the side of the No. 7 green, when he again needed two shots to get out. That bogey tied them again, with Spieth making par after a benefitting from tee shot wide right that hit a tree and ricocheted into the fairway.