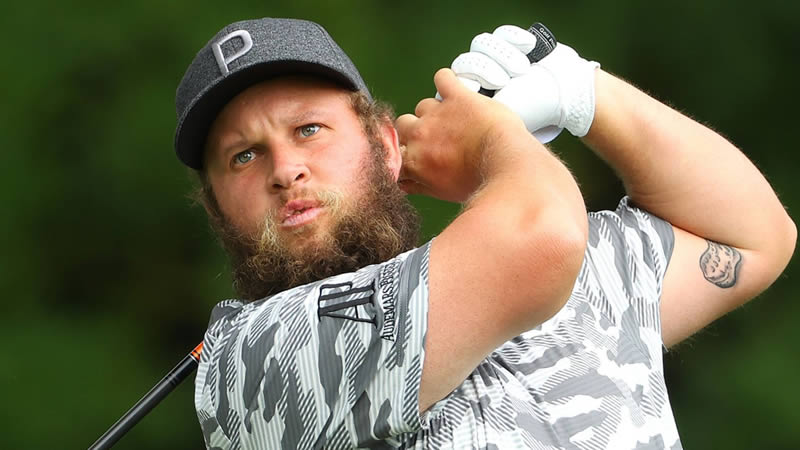 Fan favourite Andrew “Beef” Johnston fired an opening 66 to lie just one shot off the lead at the BMW International Open. Watch live coverage from day two in Munich on Friday from 11:30am on Sky Sports Golf.

Andrew Johnston went a long way towards putting “a difficult year” behind him as he made a strong start to the BMW International Open in Munich.

Johnston fired a six-birdie 66 in damp conditions at the Golfclub Munchen Eichenried, where Sam Horsfield was tied for the lead on seven under when play was suspended with storms approaching.

Wade Ormsby was already in the clubhouse after his early 65, while Horsfield and Masahiro Kawamura still have one hole to complete and Sebastian Garcia Rogriguez is also tied for the lead having raced to seven under after only 12 holes.

Two-time champion Pablo Larrazabal enjoyed his usual fine start in the event, firing a 66 along with fan-favourite Johnston, who was delighted to keep a bogey off his card on day one.

“It’s been interesting, it’s been difficult this year,” said ‘Beef’, who had to miss the Abu Dhabi HSBC Championship in January as he had to self-isolate, missed the cut in Dubai and Saudi Arabia, and then didn’t play again until the Canary Islands swing in April.

“It was probably the most I ever prepared for the Middle East events and then I got locked in the room in Abu Dhabi, which made it very difficult and I felt like I had taken two or three steps backwards from there, and that was hard.

“Then after a big break going into the Canary Islands, I was really happy coming out the way I played those four events, finishing at the British Masters.

“It’s been a bit stop start and hopefully now we can be a bit more consistent with tournaments, not too much changing of timing of events. That’s been the hard thing, but it’s been alright, I just need to keep playing. I need to play events.

“It was a solid round of golf today, always a nice feeling to come off bogey-free. I’ll take a 66 any day. Patience was the key, I played well and it’s easy to go chasing. I just ticked along and hit the ball, find it, see what we had. It was very carefree and that’s the way I want to try to play every round.”

Bernd Wiesberger enhanced his Ryder Cup aspirations as he carded a seven-birdie 67 while playing alongside European captain Padraig Harrington, who was going along nicely at three under until he bogeyed three of the last five holes.

Much of the early focus in Munich was on Viktor Hovland, who was cleared to play after his withdrawal from the US Open midway through his second round due to sand in his eye, an issue that occurred during his warm-up session in the bunker practice area.

Hovland, a near-certainty to be in Harrington’s team at Whistling Straits, got off to a rocky start before two late birdies and an eagle at the sixth lifted him to four under along with English pair Andy Sullivan and Ross Fisher.

“I couldn’t use my eye as an excuse today, even though I had some bad play early on,” said Hovland. “My body feels great, I think I’m getting over the jetlag. It’s going.

“I made a nice putt on the 10 hole, my first of the day, and then hit it in the water on the next, on 11. I felt like I hit the ball well today, but I had some bad shots in there and they happened to be on the par-fives or the drivable par-fours – I hit them in the water, which you just can’t do out here.

“There’s a lot of birdies out there but if you keep hitting it in the water it’s going to be hard to shoot well.

“But I’m a way more consistent putter. I got really streaky before. Now, day-in, day-out I can rely on my putting a little bit more. Short game is tremendously better. Out here the greens are pretty flat, you don’t need to elevate the ball much but you still have to catch it clean and I made a lot of nice up-and-downs today.”

US Open runner-up Louis Oosthuizen looked a little jaded as he opened with an erratic 70 featuring six birdies and four bogeys, while home favourite Martin Kaymer, confirmed on Wednesday as an assistant captain for the Ryder Cup, was also two under for the first round.