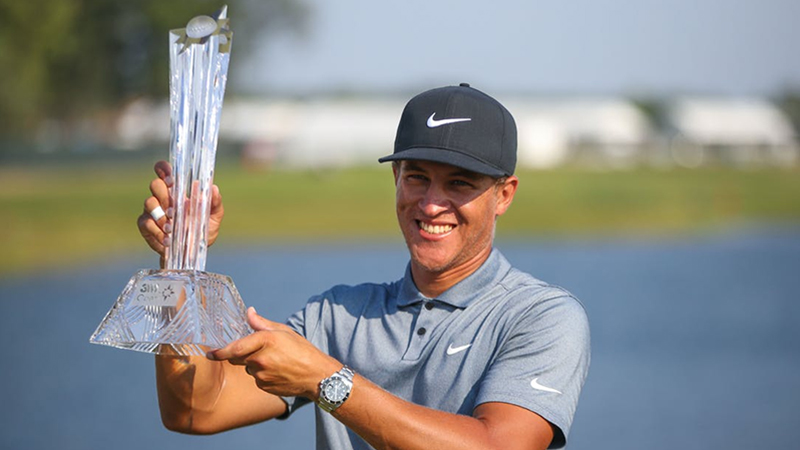 Cameron Champ, 26, got out of trouble on the final hole in a big way to escape with a par and secure a two-shot lead for the 3M Open trophy.
On Sunday, he won his third PGA Tour event – his first since the Safeway Open in September 2019 – with a change of attitude and approach, in the same month he missed a cut or withdrew for a fifth consecutive week.
When it was over Sunday and he finished TPC Twin Cities’ demanding 18th hole with a winning tap-in par, a 26-year-old seeking maturity and balance on tour pumped his fist, hugged his caddie, applauded fans and hid his face with his cap before he tossed a ball to a spectator on his way out.

As he ascended a grandstand rampway, even the most unknowing golf fans got it right when they offered congratulations. 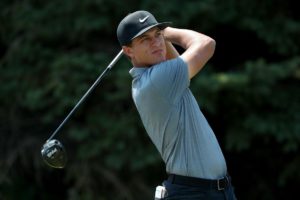 Two weeks after a T-11 finish at the John Deere Classic, Champ shot a bogey-free 66 on Sunday to win at 15 under par.

One of the tour’s longest hitters, Champ broke through by sectional qualifying as an amateur for the 2017 U.S. Open. He was tied for eighth place after two rounds and also led the field in driving distance.

He soon turned pro, won on tour for the first time a year later and now joins Collin Morikawa, Jon Rahm and Bryson DeChambeau as those 27 or younger who have won in each of the tour’s past three seasons. 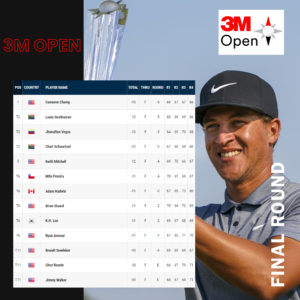 Champ did so Sunday by beating major champions Louis Oosthuizen and Charl Schwartzel as well as big-hitting Jhonattan Vegas by two shots. He did so on a blazing afternoon when he hunched over late in his round, lightheaded from dehydration until he was handed a sports drink.

“Obviously, I feel a lot better now,” he said after he held 3M Open’s glass trophy.

In one week, Champ moved from 142nd in FedExCup points to 49th. The top 125 advance to next month’s playoffs.

Things might have been different Sunday if Oosthuizen’s on-line birdie putt hadn’t stopped short at the par-3 17th. Or if his approach shot for eagle hadn’t drawn backward directly over the hole without falling at the 18th.

But they didn’t, and did.

Oosthuizen has finished runner-up 12 times on the PGA Tour, four of them in his past seven starts. He finished second at May’s PGA and June’s U.S. Open and third at last week’s British Open.

He chose to play in Blaine straightaway because he wanted to get back to work.

“I was happy to play this week,” said Oosthuizen, the 2010 British Open champion. “I didn’t really want to think about last week, about not playing great on that Sunday. We had a great time here and I’m just trying to see if I can go one better than all these seconds and thirds.”

The 2011 Masters champion, Schwartzel followed last year’s 3M Open third-place finish with second place this time after he shot all four rounds in the 60s, as did Champ.

Vegas finished second in his career for a third time, all this season. He is headed early Monday to Tokyo via Chicago to play for Venezuela in this week’s Olympic men’s golf competition.

“We don’t really get to play for our countries that often,” Vegas said. “Venezuela’s been going through extremely rough times lately. To be able to represent it and hopefully give the country a medal would be a dream come true.”

Champ wore the names of his wife andlate grandfather on his glove Sunday and glanced down often to remind himself what’s important. His grandfather, Mack “Pops” Champ, died days after his Safeway Open victory.

“Before I made that putt on the last, I was kneeling down and saying, ‘Thanks, Pops,’ ” said Champ, who was raised in Sacramento and lives in Houston. “It gets me emotional.”

Champ made three birdies on his front nine, two on the back and gave himself some breathing room with his final one at the short par-4 16th. He hit driver on the 18th tee with the two-shot lead into deep grass well left of the fairway but made par nonetheless.

He said he told his caddie all day there was no way they were going to lose the lead and tournament.

“I felt super comfortable,” Champ said. “It was mine to take, not mine to lose.”

Champ called the changes he has made since he missed the cut at Detroit three weeks ago “between the ears” and part of growing up for a golfer who had grown temperamental and frustrated by unmet expectations, especially his own.

“After Detroit, I had to take a step back and realize who I want to be,” Champ said. “I said, ‘You know what? This is enough. I can’t keep going this way. I’m not enjoying the game.’ I had to figure out how to manage my own expectations and what I want to do in life. I was just putting a lot of stress on myself and acting certain ways I usually wouldn’t act on the course.

“I had to step back and say this has to stop. I’ve got to be more true to myself, no matter what.”

Keith Mitchell, who set a PGA Tour record Saturday by starting his round with seven consecutive birdies, finished alone in fifth at 12 under. Six players tied for sixth at 11 under.

Round 3 leader Cameron Tringale struggled to a 74 on Sunday and finished tied for 16th. Just one 54-hole leader has converted that lead into a win in the past 13 PGA Tour events — Phil Mickelson’s win at the PGA Championship in May.