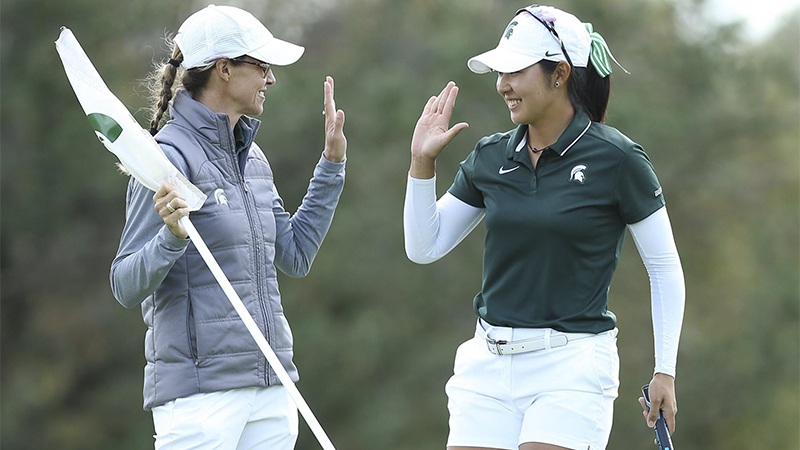 Michigan State women’s golf head coach Stacy Slobodnik-Stoll has announced the program’s schedule for the upcoming 2021-22 season. The 2021 Big Ten champion Spartans will play a total of eight tournaments prior to the 2022 conference championship, which will take place at Fox Chapel Country Club in Pittsburg, Pennsylvania, April 22-24.
The Spartans will get the season going Sept. 13-14 with a new tournament stop for the program – the Cougar Classic at Yeamans Hall Club in Charleston, South Carolina.

The fall schedule closes with a mainstay on the MSU schedule, The Landfall Tradition, Oct. 29-31 in Wilmington, North Carolina.

MSU’s first tournament of the new year will be another familiar stop in Orlando, Florida, with the UCF Challenge at Eagle Creek Golf Club, Feb. 6-8.

The Spartans head to Houston, Texas for the ICON Invitational at the Golf Club of Houston, Feb. 21-22, then back to Florida for the Gator Invitational in Gainesville, March 5-6. The month of March will wrap up with the Clemson Invitational at The Reserve at Lake Keowee in Sunset, South Carolina, March 25-27.

The Lady Buckeye Invitational in Columbus, Ohio, April 15-16, will serve as the Spartans’ final tune-up prior to the Big Ten Championship, which will be April 22-24.

The 2022 NCAA Championships return to Greyhawk Golf Club in Scottsdale, Arizona, May 25-30, for the second straight year.