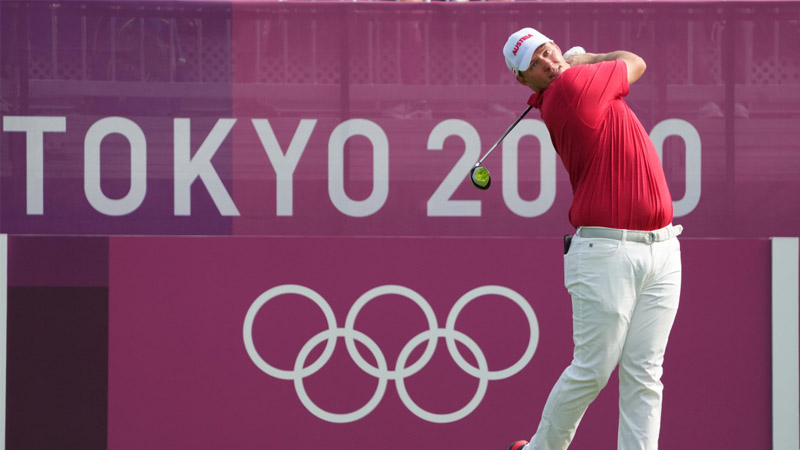 Sepp Straka leads the golf competition a the 2020 Tokyo Olympics after a brilliant 63 in a humid, soggy Round 1 of golf at Kasumigaseki Country Cub that was delayed by weather for more than two hours on Thursday in Japan.

Straka was in the first group off on Thursday morning, and nobody in any of the other 19 groups behind him was able to run him down. Still, there was plenty of jockeying for position just behind Straka, and several stars are in a good spot going into the final 54 holes.

Let’s take a deeper look at Straka’s impressive Round 1 performance and who has a chance to catch him over the next few days.

1. Sepp Straka (-8): The Austrian has missed three cuts in a row (and six of his last seven) so of course he shot a clean 63 that included no bogeys and a positive strokes-gained number in every category. Of course. It’s golf. Straka’s slim lead doesn’t amount to much as he doesn’t have a lot of staying power here. Could he contend for a medal here? Sure, but this feels a bit like a race rabbit for now. Straka has a nice game but there’s no evidence that it’s anywhere near form, though I’m encouraged by how he struck it on Thursday, and he noted that it feels like everything is coming together at the right time.

“Those first few weeks before [the Travelers Championship] when I missed the cut my irons were bad, but my short game was really good,” said Straka. “So I worked on my irons a lot and then my short game got bad. So that’s when I missed the last couple cuts. But yeah just changed my putting routine up a little bit and it worked really well and my irons have been pretty good the last few weeks, so I felt pretty good about my game.”

2. Jazz Janewattananond (-7): Janewattananond has not had his best year with just one top-10 finish to five missed cuts worldwide, but he was flawless on Thursday in Round 1. Beware of a bit of a streaky putter, though. If it flips on him on Friday, he could level out, although he did just make the cut and have a nice T46 finish at the Open Championship at Royal St. George’s in a much better field.

T3. Thomas Pieters, Carlos Ortiz (-6): Pieters absolutely flushed it in Round 1, which was a surprise to him because he said he’s been feeling terrible. His strategy? Don’t think about where not to hit it. He lost strokes to the field both on and around the greens and still dropped a tasty little 65 that has him vying to one-up his fourth-place finish at the 2016 Rio de Janeiro Olympics.

“Being from a small country we have got two medals up to now [at the 2020 Tokyo Olympics] … if you just get one more for your country, I mean it’s like legendary status back home,” said Pieters. “So, yeah, I just want to get a medal, it would be lovely. But long way to go.”

T5. Joachim B. Hansen, Jhonattan Vegas, Juvic Pagunsan (-5): Vegas has been on fire of late with three top-11 finishes in his last four starts, including a T2 last week at the 3M Open. This opener was no surprise given how well he’s been striking it, and the encouraging part for him (and those of us who picked him to finish in the top 10 at +350) is that he didn’t putt it that well at all on Thursday, which means more could be coming on Friday and Saturday.

T8. Sebastian Munoz, Paul Casey, Anirban Lahiri, Alex Noren (-4): The Great Britain team has been probably more vocal than any other about how meaningful this week has been, and Casey reiterated that on Thursday after his 67 when he discussed how inspired he’s been by other athletes from Great Britain.

“I feel that there’s an immense sense of kind of responsibility to I’ve got to try and deliver as much as I can,” said Casey, who is staying in the Olympic Village. “They don’t put pressure on you, Team GB is never about that, it’s not been mentioned once, you need to deliver kind of thing. No, but you feel that with the other athletes because everybody else is performing so brilliantly, I want to perform and live up to their expectations as well.”

T12. Xander Schauffele, Adri Arnaus, Henrik Norlander, Antoine Rozner, Christiaan Bezuidenhout, Si Woo Kim, Viktor Hovland, Patrick Reed (-3): Schauffele is the big one here. Of his four wins as a pro, three have come in small field events with no cut like this one. He remains among the handful of favorites after his 68 in Round 1 (in which he made bogey at the final hole). He needs to tighten up his iron play a bit, but he’s in a premium spot going into the second round, and I think he’s the one to watch from the chase pack as the tournament begins to unfold a little bit.

T20. Hideki Matsuyama, Collin Morikawa, Rory McIlroy (-2): Considering the amount of pressure on Matsuyama to thrive in his home country at these Olympics, his 69 in Round 1 wasn’t all that bad. His ball-striking was a bit shaky, but if one of the best of his generation in that category can right the ship on Friday, he should be in this going into the weekend.

“If I say there’s no pressure I’ll be lying, so hopefully I’ll be able to embrace the pressure and that’s upon me and just try to put together a nice tournament here,” Matsuyama said.

T41. Justin Thomas (E): There was absolutely nothing notable about Justin Thomas’ round. Literally nothing. He made 18 straight pars (which is actually extraordinarily difficult to do) and finds himself in a pretty deep hole going into Friday. It’s one he’s certainly capable of digging himself out of, but he’s going to have to get some shaky iron play (at least for him) over the last few months rolling again because that did not happen in Round 1 on Thursday. It would also help if he didn’t lose multiple strokes to the field with his putter. J.T. also gave the quote of the first round.