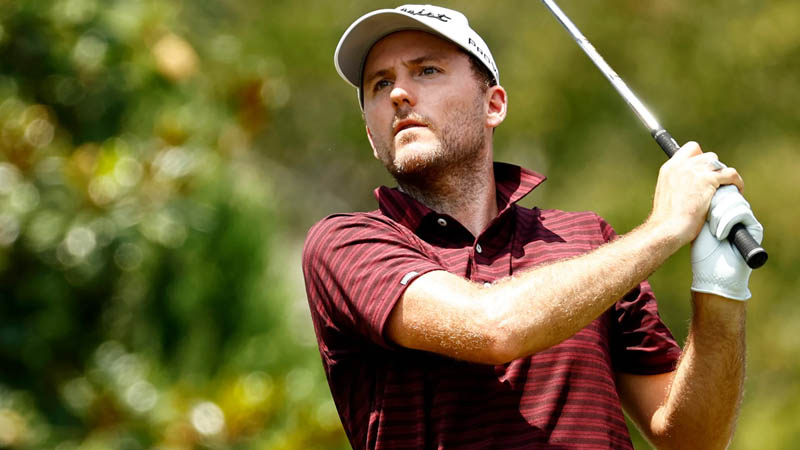 Russell Henley rattled in a 19-foot birdie putt at 18 for a eight-under par 62 and a two-shot clubhouse lead in the weather-disrupted opening round of the US PGA Tour’s Wyndham Championship on Thursday.

The 32-year-old American used a combination of aggressive approach shots and precision putting for a bogey-free round at Sedgefield Country Club.

“After three weeks off obviously I feel really excited about my score,” Henley said. “I was a little bit rusty with the swing but had a few good breaks. So overall I feel encouraged and hopefully I can be a little cleaner off the tee tomorrow.”

The first round of the $6.4 million tournament was halted because of darkness with about two dozen golfers still on the course.

There was a two hour, seven minute delay in the afternoon session due to lightning storms in the Greensboro, North Carolina, area.

Half a dozen golfers were two shots adrift of Henley, including South Korea’s Kang Sung, Americans Michael Thompson and Ted Potter and Canada’s Adam Hadwin, who was six-under with two holes to play when play was halted.

Some of the biggest names in golf, including FedEx Cup points leader Collin Morikawa, are taking the Wyndham off to rest up for the US tour’s playoffs which begin next week.

Only the top 125 players in the standings will qualify for the first leg of the PGA playoffs.

Henley’s round included an eagle and six birdies and was another example of the solid golf he has been playing.

He had three top 20 finishes heading into last month’s British Open, including a tie for 13th at the US Open in June.

Henley is seeking his fourth win on the US tour, his most recent coming at the 2017 Houston Open where he beat runner-up Kang by three strokes.

Playing in scorching hot conditions, Henley eagled the fifth, then birdied the sixth and seventh.

On the par-five fifth he drilled his second shot to five feet and sank the eagle putt. He sank a 32-footer at the sixth and a chipped in at No. 7.

“Just kind of things got going there,” he said.

He closed his round with back-to-back birdies, including the long bomb at the 18th.

“Definitely glad it hit the hole. I lost a little focus there. I think everybody’s about to pass out at this point, it’s so hot,” he said. “Growing up in the south, I guess I should be used to it.”

Kang had five birdies on his back nine mixed in with two bogeys to finish at six-under for the day. He made three straight birdies, beginning at the par-four eighth, to get to five under with seven holes to go.

Kang said he wasn’t expecting the weather to be such a factor Thursday but is going make sure he stocks up on towels and an umbrella for Friday.

“I had an early tee time, so I didn’t think it was going to be this hot,” Kang said. “It’s really hot. I’ve never really had it this hot in Greensboro.”

South Africa’s Erik van Rooyen, who won last week’s Barracuda Championship for his first USPGA Tour title, was in the clubhouse tied for ninth after a solid 65.

The 2012 US Open winner Webb Simpson also shot a 65 Thursday.