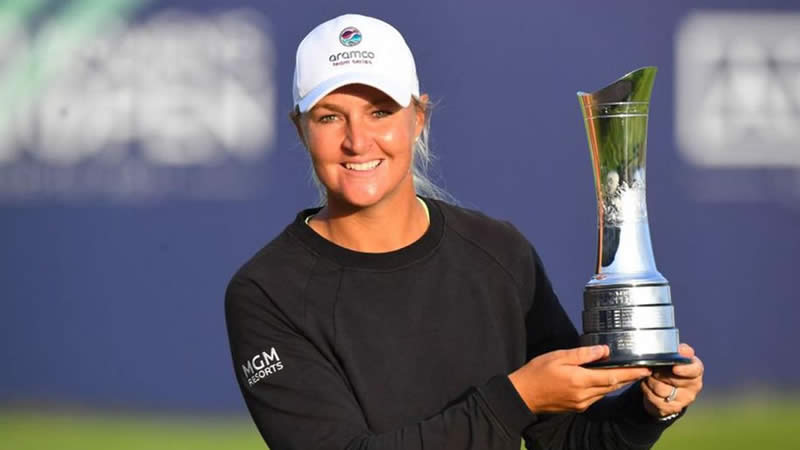 Carnoustie’s 18th has caused such championship carnage that one wonders about the utterly warped mindset of the person who designed it. “Home” is an understated name for a hole that should come with an X rating.

Nanna Koerstz Madsen is the latest golfer to come a cropper right in front of the Carnoustie Hotel. Amazingly, this capitulation did not even include a trip to the infamous Barry Burn. She was in with a live chance of becoming the first Dane to win a male or female major when taking to the 72nd hole in a 12-under-par tie with Anna Nordqvist.
Koerstz Madsen even found the fairway. What happened next, a grisly scene, will surely haunt the 26-year-old for some time. Koerstz Madsen carved her second shot right and into a horrible lie in a greenside bunker, with her third an ugly shank which skittered into undergrowth beyond the putting surface.

Shellshocked, she later tapped in for a double bogey, which allowed Nordqvist to seal her third major title.
Koerstz Madsen, such an integral part of this tournament, suddenly found herself in a tie for fifth. Georgia Hall, Lizette Salas and Madelene Sagström shared second, one short of Nordqvist’s total. Sympathy for Koerstz Madsen is completely warranted; her challenge fell the way of Jean van de Velde and Sergio García at Carnoustie’s brutal last. No wonder there was no appearance for media duties. This had become Nordqvist’s day.

“I’ve been waiting for this for a while,” said Nordqvist. “I haven’t won one [a major] in a few years. There have been a lot of downs since then, which makes it even sweeter. I’m so happy to be here. My husband is from 20 minutes away from here and this place is truly special. I have absolutely loved it here, especially with the fans back.”

Indeed, Nordqvist, 34, is still not even the most famous member of her family in these parts. Her father-in-law, Hamish McAlpine, was Dundee United’s goalkeeper during a famed period in their history, under Jim McLean in the 1980s. McLean would have admired Nordqvist’s nerve; as others wilted, she produced a level par back nine of 36. A fourth round of 69 included the only dropped shot – at the 12th – of Nordqvist’s final 36 holes. This marks her first win of any kind since the Evian Championship of 2017.

The denouement was also painful for Sagström, who shared the lead when standing on the 18th tee. Sagström found a fairway bunker, from which she could only pitch out sideways. As a par putt from 20ft slid agonisingly past, Sagstrom knew she needed favours from both Nordqvist and Koerstz Madsen. Only one obliged.

Hall’s 67 included two eagles. The 2018 champion will rue a third round of 73. “I am very happy with the way I played,” Hall said. “That’s all I can ask for.” A 69 for Salas was bogey free.
Minjee Lee, who won her first major last month, started the day five from the lead but was to produce an epic charge. The Australian reached the turn in 32 before delivering further birdies at the 11th, 13th and 16th. Now at 11 under par, Lee knew playing the treacherous final two holes in at least minus one would give her a chance of victory. Instead, Lee made par at the 17th and bogeyed the last. A 66 and 10-under total meant fifth. “I’m going to take a month off now,” said Lee. All right for some.

The Scottish amateur Louise Duncan was just two adrift of Nordqvist and Koerstz Madsen at the start of round four. A straightforward birdie at the 1st for the 21-year-old university student further raised hopes of one of major golf’s all-time fairytale outcomes. A subsequent run of seven pars and a dropped shot stalled the dream but Duncan responded superbly by collecting shots at the 10th and 11th. Her 72 and tie for 10th meant nothing whatsoever in monetary terms given non-professional status but Duncan has proved herself as one to watch. The calibre of players Duncan finished in front of says it all about her showing.
“I feel a bit mind-blown, as if it’s not actually happened yet,” Duncan said. “So maybe it will take a couple of weeks to sink in. I feel over the moon with how I played and how I handled it. I had a great time.” Nelly Korda signed off with a 72 for a six under aggregate . Thoughts of Tiger-esque dominance by the 23-year-old, floated before this tournament, will have to wait for now. Next up for Korda is the Solheim Cup for which Europe’s prospects have been boosted by Nordqvist’s latest major glory.