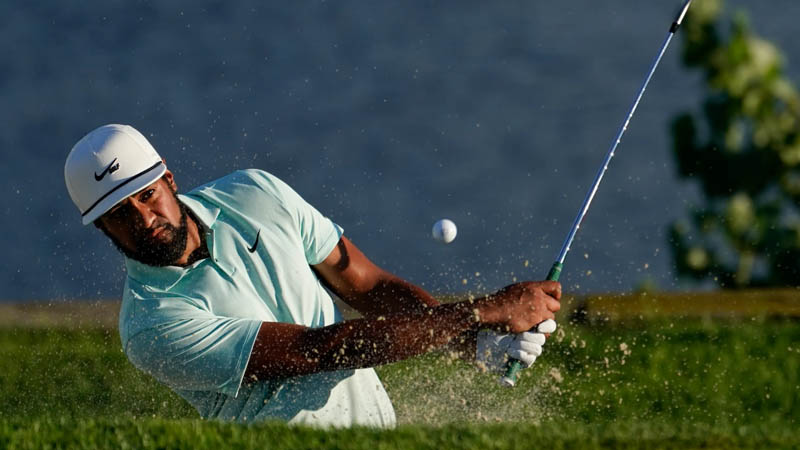 Stubbornness of belief carried him through 39 top-10s without a win
Tony Finau news conference after winning THE NORTHERN TRUST
He was a connoisseur of the close call, an object lesson in losing with dignity, and at odds with his putter. Golf gave Tony Finau ample reason to believe it just wasn’t meant to be. Not for him, and not on the PGA TOUR, the toughest tour in the land.

And yet there was an ember that simply wouldn’t die, a stubbornness of belief that despite all evidence to the contrary – eight runner-up finishes and 39 top-10 finishes since his first and only TOUR win in Puerto Rico, in 2016 – he could do this.

“I have an extreme belief in myself, and I have to,” Finau said after shooting a final-round 65 and beating Cameron Smith with a par on the first hole of a playoff at THE NORTHERN TRUST at rain-soaked Liberty National. “This game is hard as it is. These guys are so good as it is. If you can’t believe you can beat them, man, it’s just an uphill battle, and I just continue to believe.”

How did he do it? How did this extravagantly talented 31-year-old family man bounce back to rocket all the way to the FedExCup standings after so much heartache?

In golf terms, he simply hit it better than anyone else from tee to green. Maintenance workers worked to restore playability to the course after nine inches of rain necessitated a Monday finish, and the softness of the course may have further rewarded his distance advantage.

But for Finau winning the tee-to-green game is not so unusual. What stood out was his work on the greens, where he gained 2.338 strokes on the field in the final round. He was 16 in Strokes Gained: Putting for the week despite coming into the week at 114th in that stat.

His resilience was harder to measure but perhaps even more important. He went into his playoff against Smith with a 0-3 career record in sudden death, and some of the losses were gruesome. Falling to Max Homa at the Genesis Invitational this season? Tough.

Losing the Waste Management Phoenix Open last year, when Webb Simpson birdied the last two to catch him and then birdied the first hole of the playoff? Brutal.

Finau had seemed to have two hands on the trophy in Phoenix, and afterward his oldest son, a budding golfer himself, was in tears beside the 18th green. Soon the TOUR went on COVID hiatus, leaving Finau to think about what he could have done differently. On Monday he called it his toughest loss. “It’s hard losing,” he said, “and it’s hard losing in front of the world.”

A steady drumbeat of questions and endless analysis followed every close call. Finau changed putters, changed grips. He went left-hand low, switched back to conventional. After hitting a succession of spectacular shots but getting little out of it in his third-round 68 at Liberty National on Saturday, he said he was going to have a talk with the flatstick.

Instead, given the day off Sunday while Henri dumped nine inches of rain on the course, Finau practiced on the carpet in his hotel room throughout the day.

“I would say I putted for maybe an hour and a half total,” he said. “Just kind of five, ten minutes here and there throughout the day. I didn’t really leave my room all day.

“I wouldn’t say I found something,” he added, “but I knew I was putting it nicely.”

In fact, Finau one-putted seven of his last nine holes for a back-nine 30. Some of these, like his birdies on 12 and 16, were near kick-ins. So was his eagle at 13, set up by a majestic 6-iron that was perhaps the shot of the tournament.
But there were knee-knockers from just outside 6 feet to save par at 11 and 18. These are the types of putts he didn’t make in his win drought. And he certainly didn’t convert from over 30 feet, an unexpected bonus, the way he did for birdie at the par-3 14th hole.

Meanwhile, leader Jon Rahm, the world No. 1, was finally looking human, going 2 over for his last four holes. Smith birdied the 17th hole to join Finau at 20 under, but sliced his drive out of bounds on the first hole of the playoff, the par-4 18th, all but ending it.

Rahm was there to try and buck up a crestfallen Finau at the Genesis. And the shock was so severe at the Waste Management, no one seemed to know what to do. “This one’s going to sting,” Finau’s coach Boyd Summerhays said as they all staggered away.

Now, though, Finau didn’t need any consoling at all. He had jumped into pole position in the FedExCup Playoffs, and was off for a celebratory sushi dinner.

“I believe in myself,” he said. “I believe in my team. I haven’t had the wins to maybe have that type of confidence and belief, but you just have to.