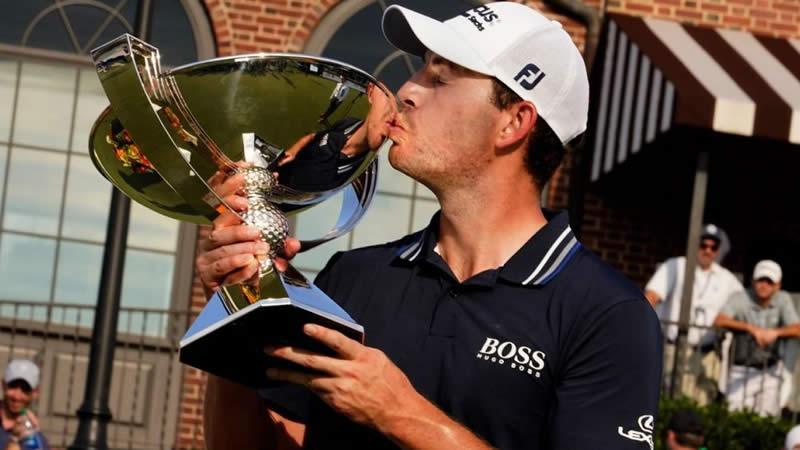 A one-under 69 gave Patrick Cantlay a one-shot victory and sees him end the 2020-21 ‘super season’ as FedExCup champion; Tour Championship win is his sixth PGA Tour title and fourth of the season, as world No 1 Jon Rahm claims second spot.
Cantlay took a two-shot advantage into the final day at East Lake and never lost his lead throughout a gripping Sunday, with a one-under 69 enough to hold off the Spaniard and secure the biggest prize of his career to date.
The victory is Cantlay’s fourth of a remarkable PGA Tour season, while Rahm was left having to settle for second after a final-round 68 saw him end the week on 19 under.
No player seriously threatened the top pairing throughout the weekend in Atlanta, with a final-round 67 lifting Kevin Na into third spot above 2017 FedExCup champion Justin Thomas – who posted a level-par 70 to end on 15 under.

Rahm – starting two back – recovered from a wayward drive at the first to hole a six-footer to save par but found himself three behind when he failed to convert his 12-foot birdie attempt at the par-three second, as Cantlay knocked his tee shot a few feet closer and made the putt.

The pair exchanged pars over the next two holes before a two-shot swing at the fifth saw Cantlay fail to get up and down from just short of the green, while Rahm fired his approach to tap-in range and cut the advantage to a single stroke.

Cantlay responded by rolling in a five-foot birdie at the par-five next to move two ahead, as Rahm was unable to hole his from double the distance, although the American squandered an eight-foot birdie opportunity at the eight that would’ve extended his cushion.

Rahm splashed out of the sand to three feet and save par at the ninth, where Cantlay found rough of the tee and two-putted from 15 feet for a bogey that saw him reach the turn in level-par and just one ahead.

Both players made three straight pars from the 10th and shared the spoils again at the 13th when Cantlay inexplicably missed his birdie opportunity from inside four feet, with the pair also getting up and down from off the 15th green to save par and continue to trade blows on the back nine.
Cantlay made his breakthrough when he struck a brilliant approach to inside six feet at the 16th to take him two ahead with two play, but had to hole a six-footer to salvage just a bogey at the next after missing the green in three.

Rahm almost holed his approach into the par-five last for albatross and then came inches away from a chip-in eagle from the fringe, leaving a closing birdie, as Cantlay reach the green in two and two-putted for a winning birdie.