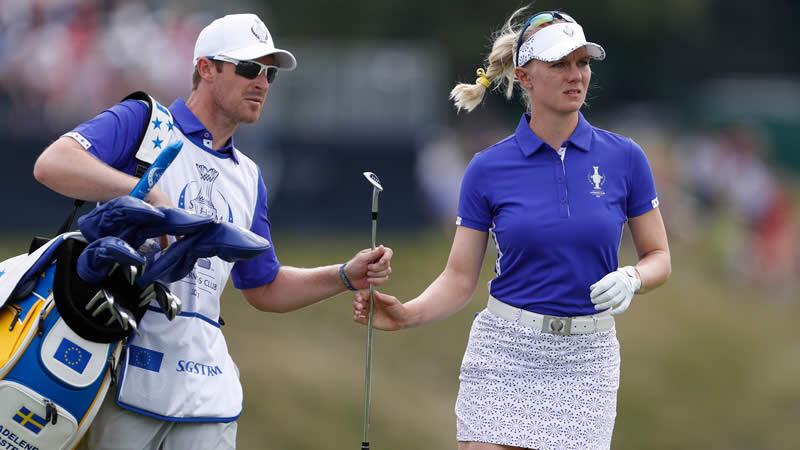 Catriona Matthew’s side made it back-to-back Solheim Cup victories and claimed just their second away success in the tournament’s history by winning 15-13; Matilda Castren earned the point to retain the trophy before Emily Pedersen sealed the outright title defence
The visitors took a 9-7 lead into the final day at Inverness Golf Club and required just five points to retain the trophy they won in dramatic fashion in 2019, with five and a half points needed to secure only their second away success in Solheim Cup history.
Catriona Matthew’s side won the first three points of the Monday singles to extend their advantage, only for the hosts to claim points from the next five matches to reduce the deficit to two with four games still on the course.
Any hopes of a remarkable American comeback ended when rookie Matilda Castren secured the point needed to retain the trophy, while Emily Pedersen claimed the winning point for Team Europe as they ran out 15-13 winners.

Ireland’s Leona Maguire, who had claimed a half-point alongside Mel Reid late on Sunday to ensure Europe went into the singles two ahead, signed off her unbeaten debut in style with a 5&4 victory over Jennifer Kupcho to register the first point of a memorable Monday for the visitors.
That win ensured the rookie would finish as the tournament’s top-scorer with four and a half points from her five matches, with Maguire’s success quickly followed by Madelene Sagstrom’s 3&2 win over Ally Ewing and Celine Boutier’s 5&4 thrashing of Mina Harigae to put Europe 12-7 ahead.

Anna Nordqvist and Lexi Thompson finished all square in a thrilling battle that offered comparisons with their epic singles match-up in 2017, which was also halved, while world No 1 Nelly Korda claimed Team USA’s first full point the final day with a 1up victory over Georgia Hall.
Nanna Koerstz Madsen held on for a half-point against Austin Ernst, as Sophia Popov came back from six behind against Megan Khang before eventually going down 3&2.

The American charge continued when Brittany Altomare recovered from going two down with six to play against Carlota Ciganda to win 2&1, only for Castren to hole a clutch putt on her final hole to earn 1up victory over Lizette Salas and take Europe to their required target of 14 points.

Jessica Korda produced a back-nine charge to see off Charley Hull 3&1, while Mel Reid recovered from losing her opening four holes against Yealimi Noh to take the match to the final hole before eventually being beaten 1up.
Emily Pedersen had already built up and unassailable lead against Danielle Kang when the Dane moved three ahead with three to play, all-but guaranteeing the half-point required to ensure the European win, only for Kang to win the next two holes to take the contest to the par-four last.

Kang holed a long-range birdie but Pedersen made one of her own from half the distance to secure the full-point required for the 15-13 victory – Europe’s first away success since their record-breaking victory in 2013.