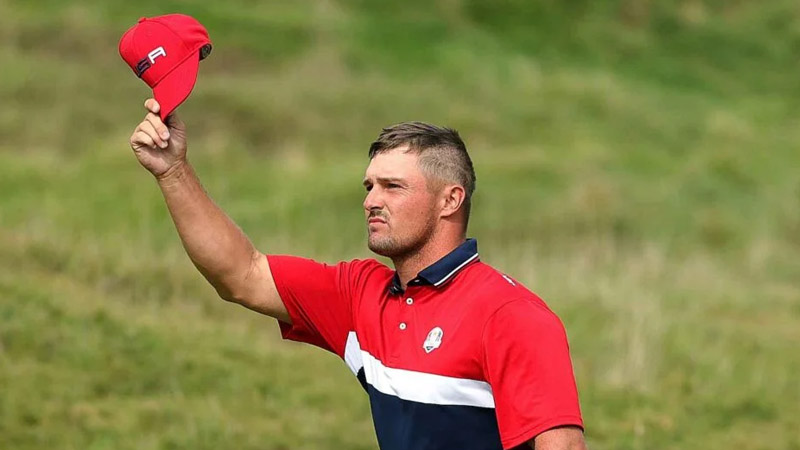 DeChambeau, the seventh-ranked golfer in the world, is coming off a Ryder Cup win with the USA
PGA star Bryson DeChambeau is putting together a week for the ages. Three days after powering the U.S. to a Ryder Cup win, the 28-year-old advanced to the third round of the Professional Long Drivers Association World Championships.

In Wednesday’s second round in Mesquite, Nev., DeChambeau recorded the longest drive in three of his five sets and placed second in the rest. His longest drive of the day went 355 yards, 12 yards shy of Scottie Pearman’s group-leading 367. The yardage was lower than usual for all golfers because they were battling a headwind.

DeChambeau finished Day 2 a mere 75 points behind his group’s winner, Martin Borgmeier. The PLDA awards golfers scores of 25-200 for each drive based on their distance relative to the competition.

On Day 1 of the PLDA Championships DeChambeau sent five of his 30 drives 400 yards or longer to place second among his 16-man group. His longest shot went 412 yards, only one yard less than Pearman’s long of 413 and Josh Cassaday’s field-leading 417. DeChambeau accounted for four of his group’s 11 400-plus yard drives.

“I felt like I just won something today, I won a big PGA tournament, even though I just qualified for the next day, because it’s my first time,” DeChambeau told ESPN on Tuesday. “Being out there the first set was a little nerve-wracking for me, I wasn’t comfortable. But going through the second, third, fourth, fifth, I just got more comfortable as time went on.”

DeChambeau hopes to carry that comfort into the rest of the tournament. On Thursday he’ll compete in the penultimate round, when two groups of 16 will battle head-to-head for spots in Friday’s final round. Those 16-man groups have yet to be announced.

DeChambeau will face stiff competition over the final two rounds, most notably in top-ranked long driver Kyle Berkshire. Berkshire won the PLDA Championships in 2019, but didn’t get a chance to defend his title in 2020 as the COVID-19 forced the event’s cancellation.

A DeChambeau-Berkshire third-round battle could be in play, and DeChambeau is embracing the challenge.

“(Thursday) is going to be tough,” DeChambeau told ESPN on Wednesday. “But I’m having so much fun.”