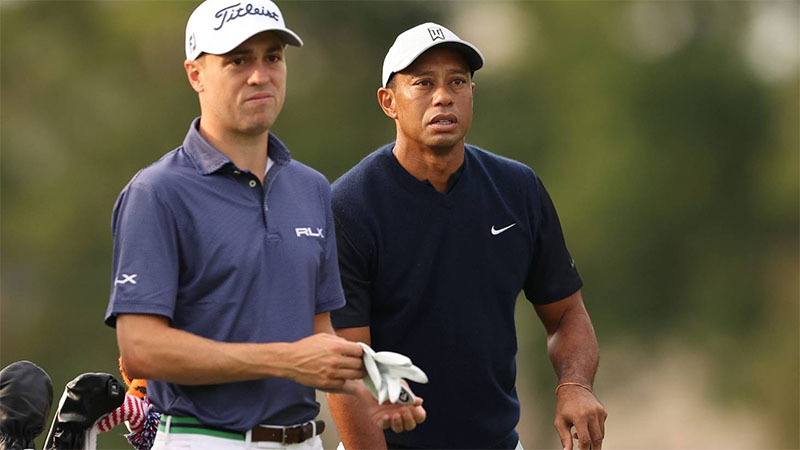 Justin Thomas this week offered an update on the health of Tiger Woods, saying the 15-time major champion is “doing well, especially all things considered.”

On a recent appearance on the No Laying Up podcast, Thomas said that he visits his fellow South Floridian a few times a week when he’s not on the road. Woods has been seen in public only a handful of times since his car accident in February that left him with serious injuries to his right leg. There have been no substantive updates on his condition over the past several months, other than a few grainy videos that show him walking without support at one of his son Charlie’s junior tournaments.

When asked about a potential return to competition, Thomas said: “I don’t know. I know that he’s going to try. I don’t see him ever playing if he can’t play well. He doesn’t strike me as a guy that’s going to play at home shooting a bunch of 75s and 76s and he’s like, ‘All right, I’m gonna go give Augusta a try this year.’ That’s just not gonna be him.

“I think he knows that there’s a pretty good chance that might be the last chance he really ever had before that of kinda making another run. But at the same time, I know how determined he is. I know he’s gonna want to at least try to give something again. Obviously, I hope he does. But at the same time, as long as he can be a normal dad again, that’s the No. 1 priority again and the rest is a bonus.”

Thomas and Woods have become close friends over the past few years, playing many practice rounds together and even partnering at the 2019 Presidents Cup. Thomas was one of the first players interviewed after Woods’ crash, as he fought back tears while in a news conference at Concession.

Thomas said that in his interactions this year with Woods, he is “doing well, all things considered.

“It’s groundhog day – every day is exactly the same for him,” he said. “He’s able to be a dad again, which is most important. He’s still his sarcastic a-hole self, so nothing’s really changed there. So I’m glad to see he’s as chipper as always.”

It’s unclear when Woods might next make a public appearance. The tournament he hosts, the Hero World Challenge in the Bahamas, is scheduled for Dec. 2-5.