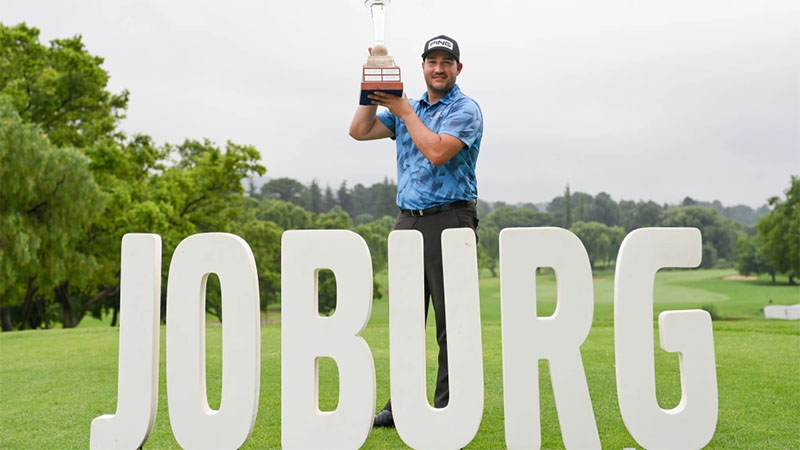 The Joburg Open has ended even earlier than expected.

Tournament officials initially reduced the DP World Tour season opener in Randburg, South Africa, to 54 holes in order to allow non-South African resident players, caddies and staff to return to their home countries as international travel restrictions go into effect because of the new COVID-19 variant, Omicron. But inclement weather, which suspended play earlier in the week, struck again Saturday, causing the tournament to be reduced to 36 holes.

South Africa’s Thriston Lawrence, who opened with back-to-back 6-under 65s at Randpark Golf Club, was declared the winner by four shots over fellow countryman Zander Lombard. He had bogeyed his opening hole of Round 3 before more bad weather rolled in, forcing scores to be reverted.

“It’s so surreal,” Lawrence said. “I don’t think anyone thought it would turn out this way, to finish on a Saturday afternoon, but I’m just really thankful. It’s a life-changing moment for me. It’s a lifelong dream that has come true. Unbelievable golf these last few days.”

Lawrence, an affiliate member who plays mainly on the Sunshine Tour, captured the title in just his 22nd DP World Tour start and now has full membership through 2023. He, along with Lombard and Ashley Chesters, also received exemptions into next summer’s Open Championship at St. Andrews.

“I had my card on the Sunshine Tour, but I really wanted to move on to the next step,” Lawrence added. “It happened so quickly. There’s a lot of things that could happen next year. You know you’re on the Tour and you don’t have to worry about invites and it gives you a lot of confidence. You don’t these opportunities often. I’ve had four years of co-sanctioned events, so you build up experience, but it’s just unbelievable.

“It’s been a goal, you want to see yourself up there, but the last year and a half of COVID, it’s been tough so you sort of see your dreams fade. For it to change this week is unbelievable.”

Upcoming tour events in South Africa will be affected by the new variant, which had already caused several players to withdraw from the Joburg Open prior to Saturday. The South African Open, scheduled to begin next Thursday, was downgraded to an unofficial tour event, while the Alfred Dunhill Championship the following week was canceled “due to the adverse effect the travel restrictions will have on the field.”