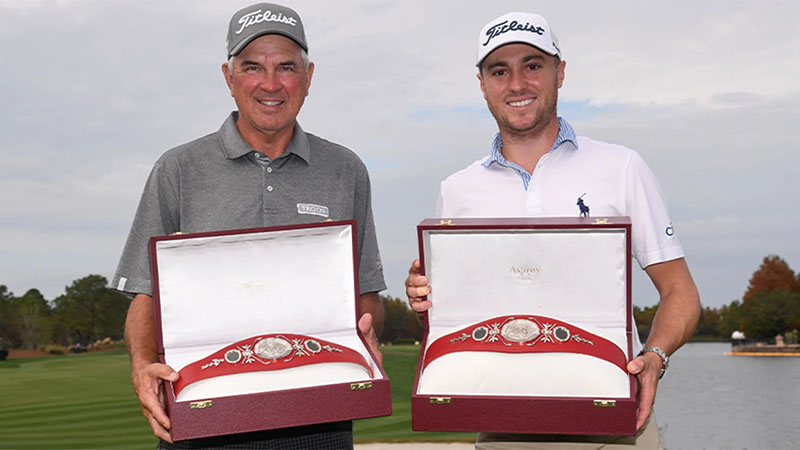 World No. 6 Justin Thomas has confirmed that he will defend his title at the 2021 PNC Championship at the Ritz-Carlton Golf Club Orlando, Grande Lakes, Dec. 16-19.

Thomas once again will play with his father, Mike Thomas, after the pair won on their PNC Championship debut last year, birding 15 of their 18 holes to card a final-round 57 and end the week on 25-under par. Vijay Singh and son Qass claimed the second spot, while Mark O’Meara and his son Shaun shared third place alongside Lee Trevino and his son Daniel, all of whom are competing again in this year’s championship.

Winner of the 2017 PGA Championship and this year’s THE PLAYERS Championship, Thomas commented: “We are excited to return to the PNC Championship this year to defend our title. It was the perfect way to end the season last year and a great time for the whole family. We’re all looking forward to getting back out there again. It is really special to be able to be out there competing with Pops amongst this amazing field of major champions and their families. We’ve both been training, we’re ready, and can’t wait for the week to start!”

The tournament, which will be broadcast live on NBC, attracts major champions whose victories this year span 1959 to 2021. Last year, the PNC Championship included a field that had won a remarkable 67 Major titles. With only 20 teams competing, players past and present have shown unprecedented interest in campaigning for a spot in the star-studded line-up.

The PNC Championship has continued to evolve and develop since the inaugural tournament in 1995, when ten major winners gathered with their sons. The tournament now features 20 major champions and their relatives competing for the total purse of $1,085,000 in a two-day, 36-hole scramble for the Willie Park Trophy.

The PNC Financial Services Group, Inc. has been the title sponsor of the tournament since 2012. The event formerly known as the PNC Father/Son Challenge, was renamed the PNC Championship in 2020 to reflect the high level of competition and field composition, while still celebrating an inclusive family event that showcases the special bonds that the love of golf creates.

To qualify for the PNC Championship, players must have won a major championship or The Players Championship. Their partner must not hold a PGA TOUR card.

The PNC Championship is operated in partnership by IMG and NBC Sports.