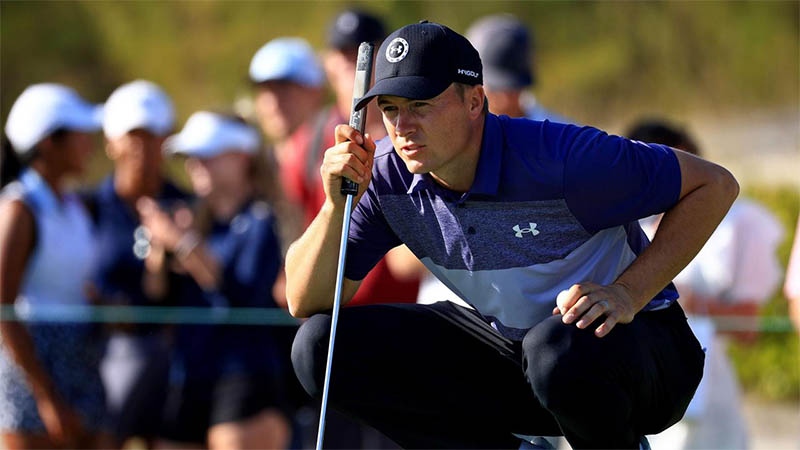 Two of the world’s best golfers were left red-faced after they failed to notice a key change to the course and were penalised.

Two of the world’s best golfers were penalised after they committed a rare mistake resulting in bizarre scenes.

American Jordan Spieth and Sweden’s Henrik Stenson were the first pairing up for the final round of the Hero World Challenge event in the Bahamas.

To change things up on the last day at the Albany Golf Club, organisers moved the tee box for the 17th hole to where it had been for the adjacent ninth hole.

The idea was that by moving the tee box forward on the par-5 ninth, it would give players a chance to reach the green in two shots.

The original ninth tee was used for the par-3 17th hole, which was slightly shorter in distance and went over the water.

But Spieth and Stenson were seemingly unaware of the change and teed up at the 17th tee by mistake, assuming it was the ninth tee as it had been on previous days of the tournament.

They both hit their tee shots and were midway through the hole when they were chased down by an official and informed they were playing the wrong hole.

Spieth and Stenson were both penalised two shots for their mistake and swiftly returned to the correct tee box and continued their round.

With the penalty, Spieth made a triple-bogey eight and Stenson shot seven on the ninth hole.

In the end it mattered little for Stenson and Spieth, who finished second last (19th) and dead last (20th), respectively, at the charity event.

Despite his error on the tee box, Spieth still pocketed a cool AUD$142,000 for his troubles.

Spieth, a three-time major winner, said he had never made a mistake like that in his golfing career.

“We kept our heads down off the finishing out on hole No. 8 and walked to the 9 tee box that we did on Wednesday, Thursday, Friday, Saturday and put the ball down and hit some beautiful tee shots,” he said.

“We didn’t pay attention being first out and just motoring along.

“Then when we went down to the balls, the rules official said, ‘Did you hit off the right tee box?’.

“A little note on the tee box would have been helpful.”

Norwegian Viktor Hovland won the event after a sensational final round of 66, which was enough for a one-shot win at the 20-man invitational hosted by Tiger Woods.

“I’ve never experienced that before,” he said.

“There was a sheet saying there was a new yardage on 17 but there was nothing about number nine.

“I actually didn’t think we were going to get penalised because it’s a charity event, but then I realised there’s world ranking involved and all that.

“I think the frustrating part for us now is that every other group … they’re making sure to tell them, but for us they didn’t. It obviously didn’t matter for us, which is fortunate I think for those guys.”

Stenson said he and his playing partner were just continuing on their merry way and had no idea they teed off from the wrong spot.