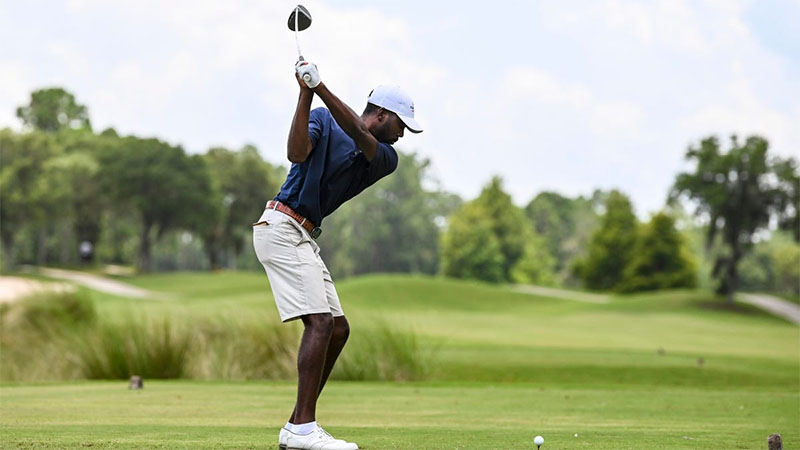 Johnson is back in field, along with Ryan Alford, after missing in 2021 because of COVID-19

Kamaiu Johnson stood in an alcove at Wilshire Country Club last month with bittersweet feelings. The APGA Tour star was excited to award a PGA TOUR exemption to his good friend, Ryan Alford, but he also was reminded of his own missed opportunity.

This year’s Farmers Insurance Open was supposed to be Johnson’s PGA TOUR debut, the culmination of an inspiring road from eighth-grade dropout to professional golfer that was made possible by the generosity of so many.

But Johnson had to withdraw from the Farmers Insurance Open after testing positive for COVID-19. Though he was later awarded sponsor exemptions to three other events, there was still disappointment in missing his chance to play San Diego’s famed seaside course that is the site of so many historic moments.

Through the adversity, Johnson had kept his head up high. That attitude has allowed him to beat the odds and make it this far. The path to the PGA TOUR was never going to be easy – he knew that – and it just steeled him to work harder. He’s a firm believer that good things happen to good people. So, he pushed aside any personal disappointments and stood tall in front of the small gathering at Wilshire after the final event of the APGA’s newly-established Farmers Insurance Fall Series.

Johnson spoke with gusto about the pride he had in Alford and how excited he was to be a part of presenting him a dream opportunity. There wasn’t a hint of dissatisfaction in his voice.

“Ryan and I, we travel together, we push each other, we talk trash, we are like family, … and at the end of the day we really just want to see each other get better and succeed. We want to be out there on the PGA TOUR together,” Johnson said.

“A lot of us here on the APGA Tour, we know that’s what Calvin Peete and Jim Thorpe and those guys did back in the day. They hung out together, they made each other stronger, they were like a big family, and they pushed each other and that’s what we want to do. It gives me so much pride to be able to announce this for Ryan. … I know he’ll do well at Torrey. I know that’s what he’s been waiting for, he’s a winner, and he deserves it.”

Alford, rendered almost speechless, was picked by the tournament committee after an impressive two-win season on the APGA in 2021. He’d narrowly missed a third, finishing runner-up at Wilshire just moments earlier.

As a high school teammate of PGA TOUR winner Sam Burns – where they claimed five state championships – Alford has been exposed to high level golf for some time. Now he gets his chance to join it.

One man certainly not surprised to see Johnson’s professionalism in the moment was Marty Gorsich, the CEO of Farmers Insurance and Chairman of the Century Club that awarded the exemption. Farmers has been an industry leader in supporting the growth of diversity in golf and Gorsich followed up with some lovely words about both players before slipping in the second surprise. Johnson also would be receiving a spot in the field for the 2022 Farmers Insurance Open.

“It’s a tough decision when trying to grant exemptions because there are always so many great stories and people who deserve opportunities,” Gorsich said. “But we thought Kamaiu was worthy last year and when we saw the way he handled himself leading into last year, going through the COVID experience and coming out of it with such class, that’s really what pushed it over the top for us.”

As the news sunk in, Johnson’s thoughts immediately turned to how he would approach things differently this time around.

“There’s a little bit of unfinished business there,” Johnson, 30, said. “This time around I’ll be more intentional in everything I do. That’s what the guys out there do so well.

“Getting COVID, … it was a devastating moment. You work so hard to play on such a big stage, … but we got through it, and it goes to show what happens if you surround yourself with the right people and work hard, then the sky’s the limit.

“You have got to let that stuff go to the side and it all just motivates me to get better. Just to get another chance to play on the PGA TOUR again, I know I’ll be ready more than I was after having COVID and I’m really looking forward to it.”

For the 25-year-old Alford, the whole process is new, but in Burns he has a regular playing partner – and friend – who can walk him through it. The pair can often be found at Squire Creek Country Club in Choudrant, Louisiana, mixing it against each other. Burns, the 13th-ranked player in the world, won twice on the PGA TOUR in 2021. Alford won back-to-back starts on the APGA in April and May and believes he can make the most of his opportunity.

“This is a dream come true and I’m so thankful to everyone who’s making this possible,” Alford said. “I’ve played Torrey once back in college and I’m excited for the chance to test myself there again. I’m happy and I’m proud and confident that the process that has me here can continue.

“In my humble opinion, I get to play on a regular basis with one of the best players in the world and I try to compare myself to him each day, and I definitely feel like my game is there and competitive.”

Alford’s grounding in the sport started with the First Tee. His father now heads up the program’s Northwest Louisiana chapter. Ryan is a former participant in PGA TOUR Champions’ PURE Insurance Championship, which pairs kids from the First Tee with Champions players. Ryan was paired with Hal Sutton, and he’s also been lucky enough to share a tee time with another major champion from Louisiana, David Toms, on numerous occasions. The key advice from everyone has been to keep calm and play your own game.

“I know I’ll just have to stick to my routine, and I know a lot of people can get blown away by this stage but at the end of the day it’s just golf and I’ve got to be mindful of that,” Alford said. “I’ve got to welcome any adversity and know that the hard work can get you through.”

Burns – who sits second in the FedExCup race after picking up his second TOUR win at the Sanderson Farms Championship in October – was overjoyed with the news of Alford’s opportunity. And he’s adamant his former Calvary Baptist Academy teammate can hold his own.

“I’m excited for him. I think it’s a great opportunity for him. Ryan and I play a lot of golf together and he’s a great player,” Burns said. “He hits it far, hits it straight, and he’s a really good putter. I don’t see any reason he won’t play well there and compete. It’s a good golf course for him and he’s had a great year so I’m excited to see what he can do.”