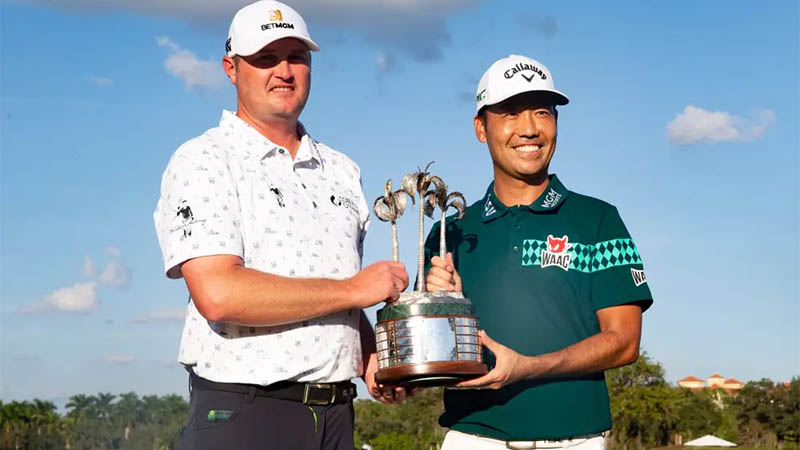 Na did just that, doing his trademark walk-in on six of seven birdies in a row — the other was his chip-in on No. 9 — and Kokrak birdied the last three holes to win the QBE Shootout by a stroke on Sunday at Tiburón Golf Club at the Ritz-Carlton Golf Resort.

“I started making some putts and hit some really good shots in there and it was just one after another after another and I just kept going,” Na said. “That chip-in on 9 was huge. I think that was a tough hole to birdie and for me to chip it in, I felt like we really gained one there.”

“He told me on nine he was going to hoop it after he missed the green, and he sure did, it was right in the middle,” Kokrak said of Na’s chip-in. “It was pretty impressive stuff to watch that and kind of inspired me a little bit to get the train going. I made a couple myself.”

Marc Leishman and Jason Day entered the final round in the better-ball format with a three-stroke lead and increased it to four early, but both of their putters went cold, and they finished third, two strokes back.

Billy Horschel holed out from near the water on the par-4 18th for birdie to put him and partner Sam Burns in second at 32-under, one behind Kokrak and Na, whose 33-under total was one off the tournament record.

Defending champions Harris English and Matt Kuchar, who tied that tournament record in a nine-shot win last year, got within a stroke with English’s eagle on No. 17, but the three-time winners didn’t come close on No. 18.

They did get a front-row seat to watch Na’s putting show, though.

“That was impressive stuff,” Kuchar said. “At one point as a competitor I wanted to say something to see if I could jinx it, but I figured we would let it go and to see how far. To go seven in a row was awesome. They combine to be a great team. Jason really turned it on kind of when Kevin finished with seven and Jason came on strong as could be. That was a tough duo.”

“You get that guy on the green, he can make a putt, a 50-foot putt look like a five-foot putt,” Horschel said of Na. “He can roll that rock with the best of them.”

“I wanted to give him the spotlight,” Na joked. “… That was awesome when he made that. I was actually a little nervous when he was putting.”

“I’m not normally known for my putting,” Kokrak said. “… I was hoping he would just walk it in and take the pressure off me, but he did enough, he pulled his own weight for sure.”

Leishman/Day and Horschel/Burns needed to hole out from the 18th fairway to force a playoff, but Burns was the only one to come close, knocking it to a few feet.

“On the back nine I said, ‘Hey, when are you going to show up?’” Na said. “He said, ‘I’ll be there when you really need me,’ and he really showed up when I needed him.”

While Na was making bombs on the green, Kokrak was hitting them all week.

“I just told him to bring the bomb and he brought the bomb,” Na said. “It was fun watching him hit those bombs. It’s nice when you play scramble, pick up the ball and walk up 30 yards and drop it. We had a good time.

“There were holes or moments that we weren’t playing so well, but we never really got down, we just kind of said, don’t — you know, if one of us said, ah, sorry, no big deal, you know? We really had a good time and that was the key to playing well.”

Na claimed the Sony Open in Hawaii back in January while Kokrak picked up two wins on Tour in 2021, first at the Charles Schwab Challenge in May and most recently at the Hewlett Packard Enterprise Houston Open in November.

The victory was an emotional one for Na, who said that two friends recently had died. One was Kenny Lee, who Na said was a friend from Las Vegas, and the other was Dusty Smith, who had been a caddie for Na growing up. He died of a heart attack.

“I mean, I’ve never cried so much in the past month,” Na said during the 18th green interview. “… I want to thank both of them, and I think this wouldn’t have been possible without them.”