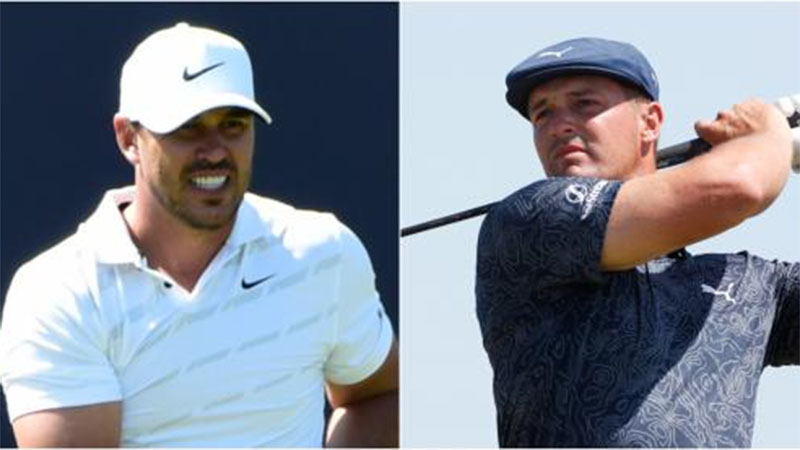 The Rosetta Stone for 2021, and really this cash-infused, PIP-soaked moment in professional golf, came just seven days into the new year. Adam Scott, too old and too accomplished to trifle with Potemkin promotional facades, laid it out there at Kapalua.

“I think you’ve got to identify that there’s probably 10 or 12 serious competition events during the calendar year and then the rest is a bit of entertainment, really,” Scott said. “So it’s finding that balance of your schedule and also for the tour’s schedule and what’s entertaining and how seriously it should be taken.”

Scott’s words about the PGA Tour may have captured the paradigm at the top of the year, and then the Bryson DeChambeau vs. Brooks Koepka feud exemplified it on almost a weekly basis for the subsequent 11 months. It was a beef borne out of real, authentic, competitive dislike, that got dressed up in beer-sponsor activations and a made-for-TV entertainment product by the time the year was out. It operated in both worlds with two players who won on tour, held major championship leads on Sundays and captivated an audience throughout the season with the kind of overt quarrel that’s so rare in golf. It also featured two of the whales being wooed by existential threats to the PGA Tour, their star profiles increasingly boosted by their beef as they tried to navigate the push-and-pull of playing for money and legacy with more of their prime golf ahead of them.

“The Feud” predated 2021, but this was the year it became strapped to a social-media rocket. What followed was a conflict that was a cocktail of enmity and entertainment, one that dominated the professional game and regularly penetrated the greater sports and culture news cycle.

Brooks vs. Bryson both delighted and exhausted golf fans, but that hardcore audience became secondary. The beef got the sport onto the most popular podcasts, sports television shows and social-media accounts. It generated memes that owned Twitter, however fleeting it was as with everything else on that platform, and a leaked (perhaps purposefully) video that quickly amassed 10 million views before it was nuked. If you’re the PGA Tour, rambling along in another year with Tiger Woods almost entirely out of view, what more could you want?

Well, for one, they didn’t want it to get too real. Undoubtedly happy with the added attention it brought, the tour never went all the way to promote the beef by pairing the two together in a tournament, something they could have easily arranged and what other pro leagues would quickly lean into. There were also those shouts of “Brooksy,” which Bryson and/or the tour interpreted as heckles at Memorial. That promptly poured affirmation gasoline on the fire and would follow Bryson on almost every hole of every PGA Tour event he played through the summer. By September, PGA Tour Commissioner Jay Monahan went on record classifying the shouts as “harassing behavior,” adding, “To me, at this point, it’s disrespectful, and that’s the kind of behavior that we’re not going to tolerate going forward.”

It illustrated the tension between the pro game’s persistent thirst to broaden its tent, make a splash, live under par … with the constraints of a member-run organization sensitive to its stars’ sensitivities. That sensitivity undercurrent was particularly strong this year, with renewed reports of disruptor leagues looking to exploit some top stars’ feelings that they’re not getting a commensurate piece of the pie.

Combined, their out-in-the-open feud made them the biggest active stars in the game. So it was no surprise to hear both of their names bandied about in reports of a Saudi-backed disruptor league offering $20 million and $30 million up front for commitments. And it was no surprise that one of the tour’s counter-measures, the Player Impact Program, or PIP, pushed this beef into a different realm. Koepka clearly leaned into it, bringing an element of competitiveness to his social-media tactics, so much so that he boasted by the end of the year that he “won the online battle.” Bryson, well, he was less surgical on social media, but the output was there, no doubt. The endpoint of this year-long tension was not a Sunday showdown with the stakes at their highest, but a processed-beef match on the Vegas strip, served with the produced elements that may be part of the alternative golf product being pitched as … entertainment … or maybe it’s competition? … by these disruptor league proposals.

Bryson vs. Brooks touched almost every major story of golf in 2021 while being the primary story itself. It played out on social media, the vehicle for any great sports feud in our modern times. It leaned into the PIP, introduced and seared into the golf lexicon forever this year. It benefited from the vacuum of a mostly Tiger-less year, getting golf into the larger sports and pop culture discussion. When the tour would only acknowledge its existence only from afar, the two settled for an alternative on-course resolution in The Match that had everyone walking away with more money in their pockets. This contretemps generated the most interest in the game this year—not always the actual game—but the larger traveling circus and all that surrounded it in the year 2021.

Koepka and DeChambeau may have been factors at the majors again, but neither won one. Together, their feud far outpaced the interest in any other star turn of those whose on-course accomplishments may have been greater. In this instance, interest in indulging the entertainment supplanted the competitive triumphs.

Tiger Woods has made the PNC Championship a must-watch event. Ask its title sponsor