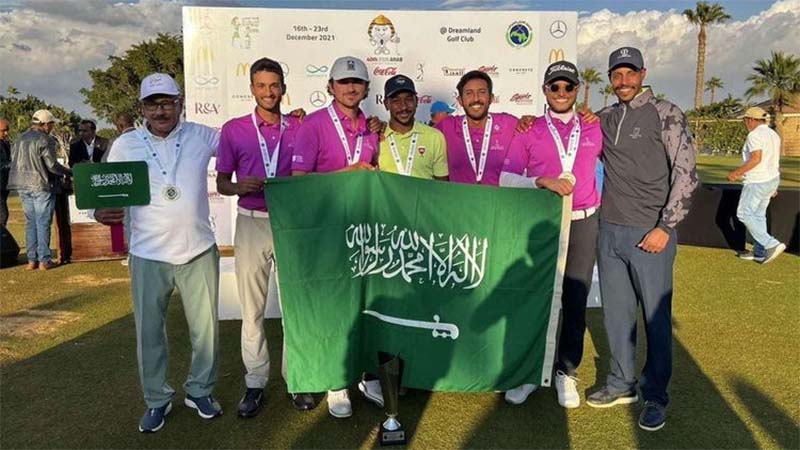 Team Saudi Arabia shot a final round score of 220 for a four-round total of 895 to win the 40th edition of the Arab Golf Championship at Dreamland Golf Resort in Cairo, Egypt, on Wednesday.

On the warmest day of the week, and starting the final round with a narrow two-shot overnight lead, the Saudis ultimately won by a comfortable nine-shot margin from runners-up Tunisia, with counting scores of 72 (Faisal Salhab), 73 (Al Sharif) and 75 (Al Mansour) and were able to discard their fourth score of 76 (Al Sakha) in this best three scores from the team of four players in each round.

The UAE team shot a final round of 235 to finish fifth overall with a 12-round team score of 940.

Faisal Salhab (Saudi Arabia) took the individual title with a final round of par 72. His consistency throughout the week with rounds of 72,72,70 and 72 gave him an eight-shot victory over Qatar’s Saleh Ali Al Kaabi, who had to settle for the silver.

Ahmed Skaik (UAE) shot a final round of 75, for a four round total of seven over 295, to take the bronze medal in the individual division. Skaik had four bogeys and one birdie, on hole 2, in his final round.

The UAE playing captain Khalid Yousuf, after the final round, said: “We have all had a good week in Cairo. Firstly, congratulations must go to Skaik for his fine performance with rounds of 76,73,71 and 75. Ahmed is only 24 years of age and over the last 18 months he has quietly gone to the next level of playing the game. He now looks comfortable among the best of amateurs as well as among professionals.

“I was disappointed with my own performance. It is very challenging to keep up with these youngsters, many of whom play full-time golf on the amateur scene in the region and beyond. I am just not devoting enough time to practice with all my work commitments, we all have to put in the hard work on the range and other areas of the game and fitness to get the desired results. There are simply no shortcuts in golf.”