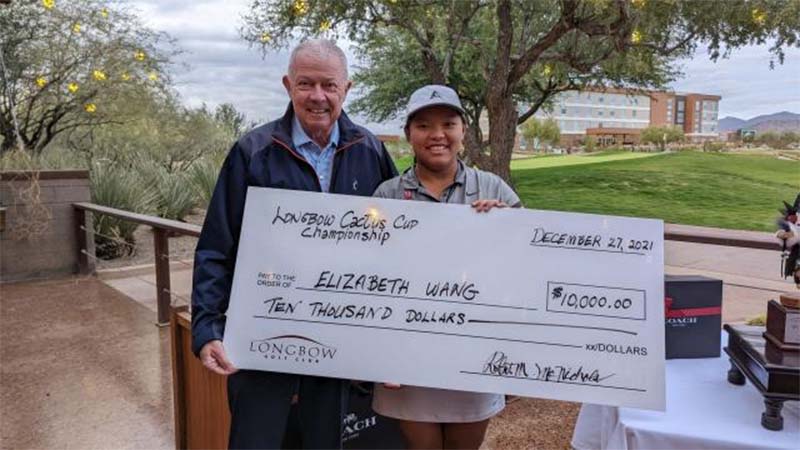 The Longbow Cactus Cup Championship returned to Longbow Golf Club in Mesa, Arizona, for a second year. In 2020, Haley Moore, who played college golf 125 miles away at the University of Arizona, claimed the top prize after prevailing in a one-hole playoff. This time around, it wasn’t as suspenseful.

Elizabeth Wang strung together seven straight pars to open her round, made her first birdie of the day on eight and then made par on the ninth to make the turn up three shots up on Gabriella Then. Kendra Dalton and Nishtha Madan were tied at 4 over after nine holes.

The tournament targets the top players on the Cactus Tour and four of the top five money winners from the 2021 season were in the field. Dalton led the circuit in money at $13,575 after she won three times. She took the early lead Monday but ran into trouble with a triple bogey on the fourth and a double on the sixth. Madan doubled the sixth while Then bogeyed and Wang opened a three-shot lead through nine holes.

Wang, 21, grew up near Disneyland and played one year of college golf at Harvard. Leaving what she called her dream school was the “hardest decision of my life,” she said. One of her notable accomplishments was knocking out world No. 1 Jennifer Kupcho in the Round of 64 in the 2018 U.S. Women’s Amateur. A rookie in 2020, she came into the event with $5,655 in career earnings on the Cactus Tour.

Wang’s lead grew to five shots after Then posted a triple-bogey 7 on the 12th but the lead shrank to two by the time the golfers reached the 18th hole. On the final hole, Dalton went for the green in two but landed in a greenside bunker. Wang then two-putted for birdie for a 1-under 71 to win by four. Dalton finished 3 over. Madan and Then finished 5 over.

She’s won twice on the Cactus Tour, but this one “feels great.”

Winning an 18-hole event was a different feeling though.