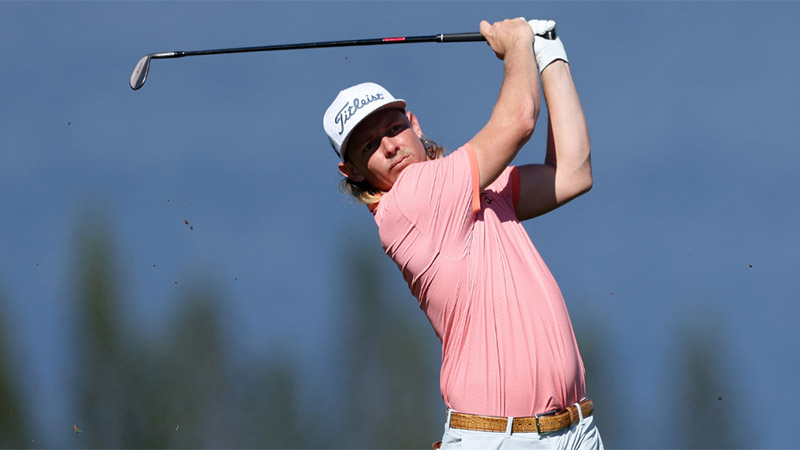 Cameron Smith shot down world No 1 Jon Rahm in a thrilling final-round duel at the Tournament of Champions in Hawaii to win the opening US PGA Tour event of the year in record fashion.

Ernie Els won at 31 under in 2003, and that was the PGA Tour record for shots under par.

While Smith became the fourth Australian to win the tournament, his compatriot Matt Jones charged home with two eagles on the back nine in a sparkling 61 to grab third spot at 32 under par as he also took advantage of the favourable scoring conditions on the Plantation Course at the Kapalua Resort.

“Mate, it was intense. Jonny and I played well the whole day and we had Matty in the group in front lighting it up as well,” Smith said moments after this fourth win on the PGA Tour. “Unreal round, something I’ll never forget for sure.”

Smith made eight birdies including one on the 18th in a bogey-free round but was never more than two shots ahead on Sunday as Rahm (66) remained in contention and Jones backed up a 62 a day ago with an even more remarkable 18 holes to set a PGA Tour record for the lowest two-round score.

Jones’s round included holing out for eagle on the 13th and a 4-foot eagle putt on the 15th as he made multiple eagles for the second successive day.

But Smith, a two-time winner of the teams event in New Orleans, was not be denied as he held his nerve once again in Hawaii to add to his maiden individual success at the Sony Open two years ago.

“I was just trying to hit one shot at a time, I know that sounds cliche,” he said. “We spoke about it earlier in the day that we wanted to get to 35 under. We missed it by one so in that sense disappointing but happy to come away with the W.”

The victory sets up Smith for a big year, having now won on tour for three successive seasons.

“I feel like I had a really good rest. I didn’t play much in the fall and actually did some work on my swing and it came out,” he said.

Of the other three Australian in the 38-man field at the winners-only start to the new year, Cam Davis (66) and Marc Leishman (68) shared 10th places at 23 under par while Lucas Herbert was well back after a 74 dropped him to eight under.