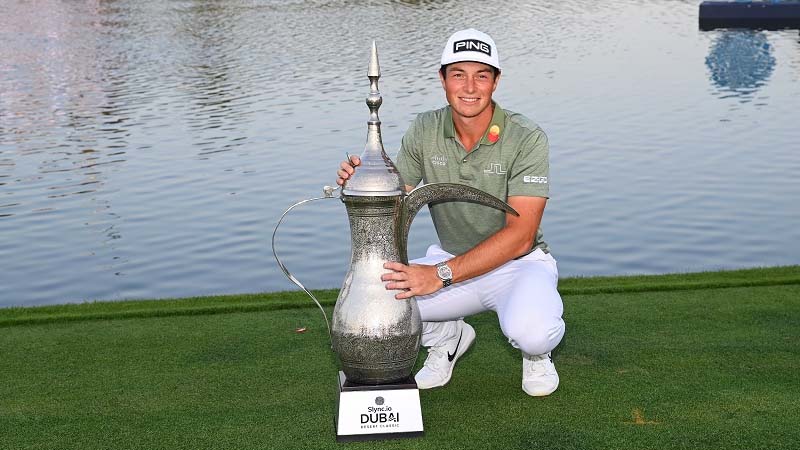 DUBAI, United Arab Emirates – Viktor Hovland beat Richard Bland in a playoff to capture the Dubai Desert Classic on Sunday after Rory McIlroy missed a chance to win the title in regulation by bogeying the last hole.

Hovland claimed his third victory in five events by making birdie from inside 3 feet at the first playoff hole – the 18th – at Emirates Golf Club. Bland had just missed a birdie putt from longer out.

Both players finished on 12-under par. Hovland shot 6-under 66 after finishing birdie-eagle-birdie, while Bland birdied the last for a 68.

McIlroy was tied for the lead with Hovland and Bland heading down the 18th hole, only to send his approach shot from 267 yards into the water in front of the green. His par putt, which would have sent him into the playoff, brushed the edge of the cup.

McIlroy, who shot 71, was looking to win the event for the third time – 13 years after the first.

“This is pretty wild, I didn’t really think this was possible going into today,” Hovland told Sky Sports. “I knew I had to shoot a real low number, but a lot of things had to go my way. I’m thankful that it did.

The 24-year-old began his round way off the pace but put himself among the contenders with four birdies on his front nine.

His hopes took a knock as he bogeyed the 15th but he then surged into a share of the lead on 11 under with stunning back-to-back efforts on his next two holes.

He first holed a 35-foot birdie putt at the 16th and then eagled the par-4 17th after a tee shot onto the green, which coincided with third-round leader Justin Harding all but seeing his hopes disappear with a triple-bogey at the 11th.

McIlroy was still looking strong, however. Two behind Harding overnight, the Northern Irishman had a wobble himself after being forced to take a drop on the 10th, but he recovered to salvage a bogey and then birdie the 11th. He then responded to Hovland’s charge by picking up another shot on the 13th to move one ahead.

Hovland, further ahead on the course, was not done yet, though, and he claimed another birdie on the last to set a clubhouse target of 12 under.

This was later matched by Bland, who – after three successive birdies around the turn – had put himself within striking distance and quietly stayed in the picture.

After a steady back nine, the 48-year-old then finished strongly with clutch birdies at the 17th and 18th to join Hovland with a 276 aggregate.

McIlroy, however, still had the closing holes to play and the tournament appeared to be his for the taking.

Yet he was unable to edge ahead and began to lose his shape as a wild drive at the 17th put him in thick rough. From there he could only knock towards the fairway and it took a superb approach shot to ensure he saved par.

He did not make the most of that reprieve when he found the lake with his second shot on the closing par 5.

That left Hovland and Bland, who is enjoying a late career renaissance after his victory at last year’s British Masters, to fight it out. Hovland held his nerve and Bland, despite an excellent chip onto the green, was unable to match the Norwegian’s birdie in the playoff.

Harding along with Sam Horsfield, Tyrell Hatton, Adrian Meronk and Erik Van Rooyen all finished on 8 under in joint fourth.