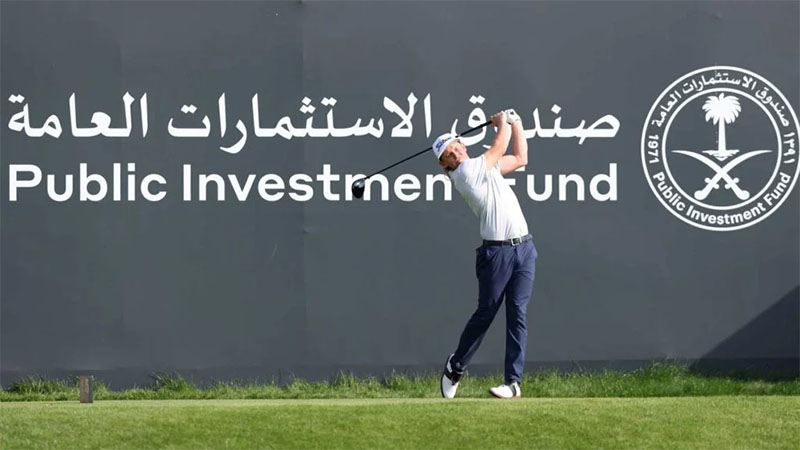 Greg Norman and company can throw around lots of cash, but the league can’t work without a huge influx of players and plenty of luck, writes Morning Read’s John Hawkins.

Fifty million bucks here, $80 million there…. If any of the world’s best golfers still view money as their primary motivator, maybe they should sign up for the Super Golf League. Short of calling it fool’s gold, the Saudi-fueled, wannabe rival to the PGA Tour takes the game’s high-stakes, risk/reward proposition to a whole new level.

Others thrive off the buzz.

Common sense believes the SGL is a long shot without a viable infrastructure. It’s no crime to wave massive fiscal incentives at men who have long since achieved financial security, but even if a half-dozen of those big names jump ship, the Saudis will remain three or four dozen away from getting their boat to float.

How super is that?

The media, meanwhile, has deftly played the role of Chicken Little in reporting what very little news there is, as if the sky will be falling any day now. For all the innuendo, there’s no sign of a crescendo. One thing we do know: almost 40 years have passed since an upstart faction attempted to stage an upheaval of a professional sports empire.

Remember the USFL? Summer football lasted three seasons (1983-85) before vanishing into the thick August air. Desperate for attention and survival, it sued the NFL on antitrust charges and was awarded $1 in damages. One dollar, as in 20 nickels, not nearly enough to buy the padlock and chain that would shut down the league’s New York headquarters.

The similarities between the two coups are striking. Like the USFL, which had Donald Trump as its marquee mouthpiece, the Saudis latched on to Greg Norman, whose responsibilities as the new Asian Tour commissioner are somewhat obvious — put the SGL on the map and make it stick. Both enterprises took on a rather daunting task: topple a monolithic American institution that was operating at the height of its powers.

Although the USFL was successful in luring ample star power to its cause, it was never able to glean public approval to the point of prosperity, which is why it didn’t stay airborne for much longer than Orville and Wilbur Wright’s maiden flight. “If they want to be upset with us, that’s their choice,” Norman said of the PGA Tour last week. “We’re not upset with them. We’re not picking a fight.”

Try telling that to Tour commish Jay Monahan, who threatened last spring to impose a lifetime ban on any player who sought greener pastures in the Saudi sand, then lavished his constituency with huge increases in purse sizes and bonus money six months later. The SGL is said to be offering guaranteed, up-front cash rewards deep into the millions, regardless of a player’s performance, but it’s not like the world’s best golfers were rationing porridge helpings before this latest opportunity came along, either.

“It’s kind of like a game of poker,” is how Lee Westwood assessed the situation before teeing it up at the Saudi International. Actually, it’s more like blind-man’s bluff — the covert emergence of a competitive option that is making gigantic promises while trying to raid a mighty incumbent of its most valued assets. Norman might project innocence and lean on that good-for-the-game stuff when laying out the SGL’s mission, but if dangling $135 million at Bryson DeChambeau isn’t stealing, it takes pro golf to places the Tour has forever resisted.

“Has it dawned on anyone that this Super Golf League might actually be helping Monahan?” a longtime industry executive wonders aloud. “His goal is to service his membership, which means getting the players more money, which is what they got when he gave them the releases [to play last week].” It was a decision on which Monahan had little choice, lest he agitate the situation by playing hardball with the men who drive his product.

They’re independent contractors one day, wealthy and willing pieces on a chessboard the next. Invariably, the SGL’s fortunes will hinge largely on whether it can provide major-championship access to its nucleus of elite players, no matter how large or small it might be. All the money in the Middle East won’t buy a commitment from anyone among the game’s top tier — guys who live and die in pursuit of those four prestigious titles — if they can’t chase the dream they’ve preserved since first learning how to hold a club.

One knowledgeable observer refers to the majors as the collective wild card in Westwood’s poker game. The reason the subject hasn’t been addressed by the media is quite simple: the governing bodies of each tournament aren’t about to deal in hypotheticals; the SGL has yet to reach terms with a single player.

“It’s not carte blanche, but each of the majors has its own eligibility criterion,” the industry exec says. “It’s all about the [Official Golf World Ranking]. Everyone in the top 50 is exempt.”

From a distance, however, the chances of those who flee the Tour earning a spot in the Masters, PGA Championship, U.S. Open and British Open could prove a bit more complex than people think. It goes something like this:

A player who has won the Masters, PGA or British gets a free pass to that tournament for the duration of his career (or until age 65). It’s hard to imagine that provision changing, as the PGA Tour holds no jurisdiction over any major. Monahan’s proposed permanent ban means nothing here.
The OWGR top-50 status covers all four majors (the U.S. Open admits the top 60), but if defectors are indeed blocked from participating in standard PGA Tour events, points will be much harder to come by. The SGL’s affiliation with the Asian Tour could result in a few elite guys beating up a bunch of nobodies. Eventually, those high finishes against weak fields will extract a toll on a player’s OWGR position.
The auxiliary benefits of remaining in America are immense. Competing against the best of the best on a weekly basis, often before huge crowds at events with weekend coverage on a major network, is something a lot of stars are very likely to miss. International travel, even on a private jet, can be burdensome and expensive.
With all that in mind, it’s extremely difficult to envision even a modest exodus from a Tour carried to prominence by the brilliance of former commissioner Deane Beman, then ushered to the land of colossal paydays by Tiger Woods, then maintained to great effect under the watch of Monahan. The players owe it to themselves to listen to any lucrative offer. Many of them surely are intrigued by such staggering numbers and the idea of getting paid to shoot a meaningless pile of 75s.

The Super Golf League amounts to little more than leverage for an exclusive group of men already blessed with pocketfuls of fortune and fame, and sooner rather than later, that will become indisputably clear. As for the few rebels who might decide to take the risk? Good luck, fellas. You’re going to need it.