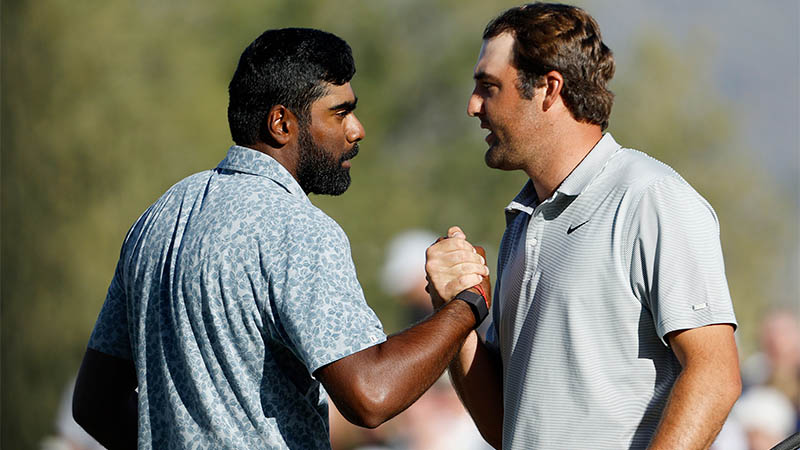 Sahith Theegala’s eyes bulged as he trailed his ball screaming through the thin desert air. He’d escaped the cauldron of adrenaline and beer-throwing at TPC Scottsdale’s madhouse 16th hole with a dry shirt and a par, his focus now solely on winning a truly hectic golf tournament.

The drivable par-4 17th has a habit of deciding the WM Phoenix Open—Brooks Koepka’s chip-in eagle last year catapulted him to the title—and Theegala thought he’d struck the decisive blow. His flushed hybrid was peeling left-to-right toward the slim runway up the center of the green. A perfect line. It would run up the center, he’d two-putt for birdie, par the last, win his first PGA Tour event in front of his parents, five uncles, six aunts and four cousins.

Until, that is, that damn ball did the one thing it couldn’t do: It kicked left. Hard left, and trickled into the water hazard lurking left of the green. A cruel reminder that golf is played on imperfect surfaces.

“I still have no idea what that bounce was,” his caddie, Carl Smith, said with a shell-shocked expression on his face.

Theegala, a distinctly un-jaded 24-year-old rookie with an easy smile and a hall-of-fame strut, failed to get up and down and failed to get himself into a playoff with Scottie Scheffler and Patrick Cantlay. He succeeded, however, in capturing the adoration of the 800,000-ish fans who made their way to party this week and the millions more watching on television. (At least until the playoff bled into the Super Bowl.) He slept on the lead three nights in a row and refused to cede his place on a star-studded leader board, even holding a three-shot lead for a brief period on the front nine.

His failure to find fairways down the stretch put stress on his short game but he handled it beautifully, getting up-and-down from the left bunker on the par-5 15th to regain a share of the lead. He had every chance to win this tournament until the golf gods forsook him. After his last-chance birdie chip at 18 tumbled past the hole fans serenaded him with THEE-GA-LA, and he raised his putter to show that the love was mutual. He fought back tears after the round, tears not of sadness but of pure emotion; this might be the most draining non-major in golf, and he played a starring role throughout its entirety.

“I loved it,” he said of the chaos. “It was awesome. I think from here on out, it makes everything else feel a little bit easier to focus and concentrate. I’ll miss some of the loud cheers for sure. I’ll definitely miss that. But yeah, if we could focus this week, I think the rest of the weeks are going to feel a little bit easier … definitely proud of the way I played this week.

Theegala does not hide his emotions; he plays with the joyfulness of a child who genuinely wants to make his fans proud. He still lives with his parents in Orange County, and he’s been driving to and from events on the West Coast in his not-so-new Volkswagen. The big boys will head to Los Angeles for the Genesis Invitational in private jets; he’ll be driving 5½ hours. The charming relatability won’t last; his golf game won’t let it. It’s too good, it’s always been too good—he won Junior Worlds at age 6 and swept the national player-of-the-year awards in his COVID-shortened fifth-year senior season at Pepperdine. He has many millions, a new car, a new house in his future. But for now, it’s downright endearing and hugely refreshing in an age when so many conversations, at least surrounding the top level of the men’s game, are about money. A star was born this week, even if he didn’t leave with the trophy.

Scottie Scheffler earned that privilege. Coming into the day, Scheffler held the unofficial title of Best Player Without a PGA Tour victory—the 25-year-old had four runner-ups, four major top-10s, a 59 and a Ryder Cup singles beatdown of Jon Rahm under his belt, but no victories. You sensed the drought would continue after he played his first 12 holes in even par to fall well off the pace, but he rallied with a four-birdies-in-five-holes stretch and, after Cantlay missed a 10-footer for birdie in the group ahead, the Texas grad found himself with a five-footer on the 72nd hole for the W. It never had a chance.

“I didn’t hit a bad putt,” he insisted. “It didn’t feel great coming off the face, but I think I just hit it through the break. I think there was a little bit of excitement, whatever it was.

“If you would have told me on 13 tee I was going to be in a playoff, I would have been pleased. I felt a little bit out of it at that point, so to finish with four birdies coming in to get in a playoff was pretty nice.”

After a quick hug from his wife and an all-business chat with new caddie Ted Scott, who looped for Bubba Watson for both his Masters victories, Scheffler headed back to the 18th tee to take on the reigning FedEx Cup champion.

Both split the fairway and both hit disappointing wedges on the first playoff hole. Pars. Both missed the fairway and hit excellent chips for up-and-down par saves on the second playoff hole. Cantlay held the advantage on the third playoff hole after his approach nestled a good 10 feet closer than his opponent’s. Scheffler then struck the putt of his life, a 26-footer that came dangerously close to running out of energy but managed to crawl over the front edge. Cantlay, who did not make a bogey in 21 holes on Sunday, could not answer.

“I’ve had a few putts on this green now,” Scheffler said. “I started to have it figured out pretty good. Teddy and I had a good read on this one. There’s a little flat spot there that does something weird to the putts; it kind of keeps them to the right. Patrick missed both his putts right there to the right in the playoff, and that’s where I missed mine to win in regulation.

“It’s amazing. There’s so many people I need to thank right now. I’m not going to thank anyone besides my family and [coach] Randy [Smith] because I’m going to forget half the people. I’m just really thankful.”

The same for Theegala, even if the storybook ending is still to come.

Eduardo Romero: Argentine golfer dies at the age of 67 from cancer