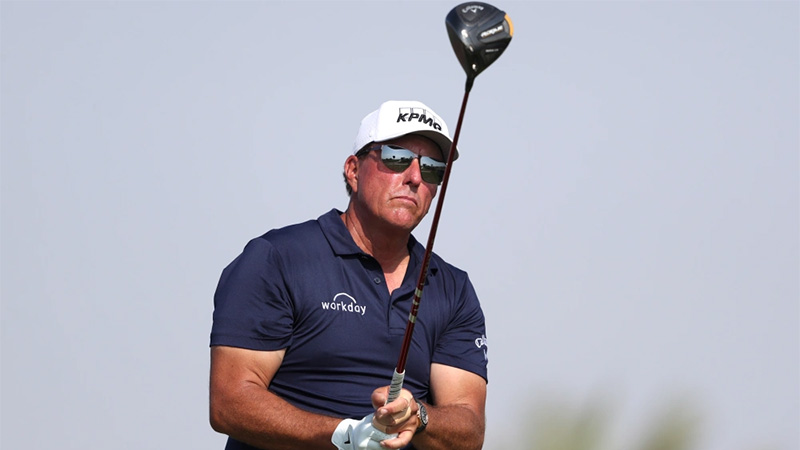 Six-time golf major winner Phil Mickelson said Tuesday that recent comments he made regarding a reported breakaway golf tour were off the record — a claim the reporter who interviewed him has denied — and said they were shared out of context and without his consent.

The Super League is reportedly a Saudi-backed proposed venture that is attempting to attract golfers away from golf’s main tours, the PGA Tour and the DP World Tour, with offers of big money.
Some of the world’s top professional golfers have recently reiterated their commitment to the PGA Tour, including Rory McIlroy, Dustin Johnson and Bryson DeChambeau.
But last week, Mickelson was quoted from a 2021 interview with author Alan Shipnuck for his upcoming book, “Phil: The Rip-Roaring (and Unauthorized!) Biography of Golf’s Most Colorful Superstar,” as saying that he would consider joining the proposed Super League because it is a “once-in-a-lifetime opportunity to reshape how the PGA Tour operates.”
The player is further quoted as saying, “Saudi money has finally given us (players) that leverage” to be able to change things about the PGA.
Shipnuck quoted Mickelson as saying disparaging things about Saudi Arabia’s human rights record and asserting that the kingdom killed journalist Jamal Khashoggi.
“My actions throughout this process have always been with the best interest of golf, my peers, sponsors, and fans,” Mickelson said in his Tuesday statement. “I used words I sincerely regret that do not reflect my true feelings or intentions. It was reckless, I offended people, and I am deeply sorry for my choice of words.”
The three-time Masters winner went on to say the sport “desperately needs change, and real change is always preceded by disruption.”
“I have always known that criticism would come with exploring anything new. I still chose to put myself at the forefront of this to inspire change, taking the hits publicly to do the work behind the scenes,” Mickelson said, adding he was “sorry to the people I have negatively impacted.”
Mickelson added that he has felt pressure and stress affect him over the years and suggested he may be taking a break from the sport, saying, “I know I have not been my best and desperately need some time away to prioritize the ones I love most and work on being the man I want to be.”
Mickelson’s longtime sponsor KPMG said in a statement Tuesday it would no longer be partnering with the golfer.
“KPMG U.S. and Phil Mickelson have mutually agreed to end our sponsorship effective immediately. We wish him the best,” the company said.
Heineken also announced that its Amstel Light brand is ending its relationship with Mickelson.
“We made the decision to go our separate ways and end Amstel Light’s partnership with Phil Mickelson. We wish him all the best,” a spokesperson for Heineken USA told CNN.
When asked about Mickelson’s recent quotes and Tuesday’s statement, a spokesperson for the PGA Tour said the organization did not have a comment.