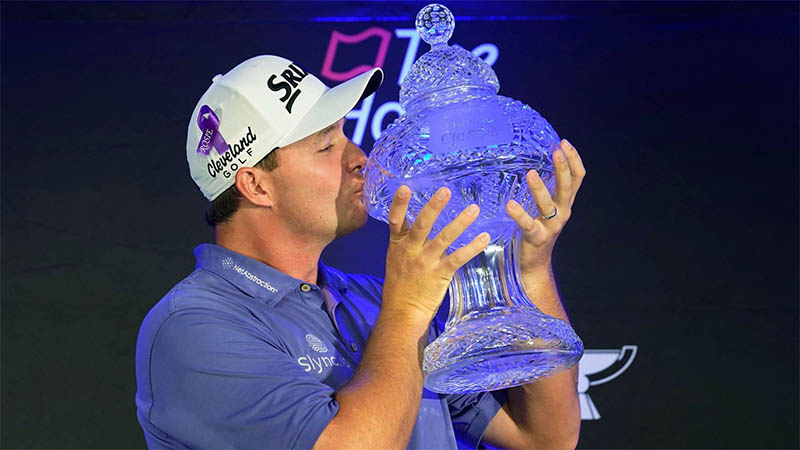 The 28-year-old produced a final round of 66 to finish 10 under; Shane Lowry ended up just a shot behind after his final round (67); Daniel Berger held a five-shot lead going into the final day, however, a disappointing display on Sunday (74) saw him end up in fourth

Sepp Straka has become the first Austrian to win on the PGA Tour after victory at the Honda Classic.

He came from five shots back going into the final day and produced a final round of 66 to finish 10 under, which was enough to hold off the advances of Shane Lowry.

Lowry’s efforts on Sunday – a round of 67 – saw him finish just a shot behind Straka and the Irishman was not helped by a sudden downpour of rain during the closing stages of his round.

Daniel Berger, who held a five-shot lead going into the final day, struggled early on and was not able to recover. He finished fourth behind Kurt Kitayama, following a disappointing 74 on Sunday.

Straka tapped in for birdie in the rain on the final hole, while Lowry needed to make a 45-footer for birdie on the 18th to force a playoff. It missed, and with that, Straka’s victory was secured, having come into the week ranked 176 in the world.

The Austrian had started his campaign with a 71 before really turning things up with rounds of 64 and 69. As a result, he was one of four players tied for second at 6 under on Saturday night.

“I did [believe it was possible],” Straka said to Sky Sports about winning on the final day. “I had a good feeling, my brother text me right before the round and he said that he had a good feeling about this one.

“So, we both had a good feelings and I just knew that I needed to keep my head down and keep going.”

The victory ensures Straka, who played his college golf in Georgia, will play at The Masters in April.

Straka’s victory matches the best come-from-behind win of the season; Luke List was also down by five entering the final round at San Diego last month.

In the end, Berger needed a miracle to try and get the title, which had looked like it was his to lose on Saturday.

He went through the first six holes four over, before producing an inspired two out of the bunker on the seventh to help restore his confidence somewhat.

However, further issues landed on the back nine, including a bogey at the 12th and when his second shot on the 18th went into the water, his hopes of victory were also washed away.

Alongside Straka, Lowry also trailed Berger by five shots entering the day and he erased that deficit after just five holes.

The Irishman made birdies on the first and fourth, then when Berger missed a 15-footer for par at the sixth, Lowry was went up by one.

Straka also methodically approached his work on the final day, despite a bogey on the first hole. A birdie on the par-four ninth got him to seven under, followed by another birdie on the 14th.

A 20-footer on the 16th pulled him into a tie and then the heavens opened, meaning the final groups would finish their work in the bucketing rain.