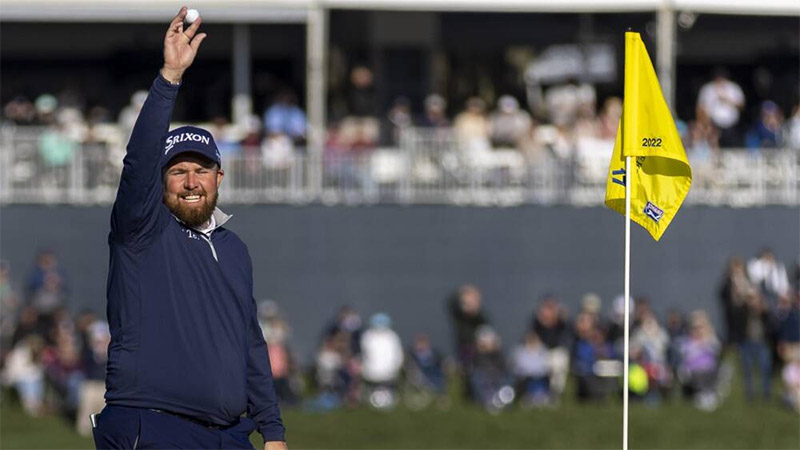 A tournament notable for disruption has produced a moment for the ages. Shane Lowry leapt in celebration and with good reason, his tee shot having spun back and into the hole at the iconic 17th at Sawgrass.

Crowd roars reverberated around the venue. Having reached the green, Lowry threw his ball into adoring galleries. The moment was poetic, given intense discussion in recent days over whether the 17th is wonderful, grossly unfair or pretty much everything in between.

England’s Tommy Fleetwood lines up a putt on the 1st hole during the second round at Sawgrass
Players battle ‘brutal’ conditions at storm-hit Players Championship
Read more
Lowry’s pitching wedge from 123 yards was just the 10th hole-in-one at the penultimate hole in the history of the Players Championship at this venue. Lowry’s demeanour was akin to a footballer who had scored the winner in a cup final. Ian Poulter and Hayden Buckley, Lowry’s playing partners, were firmly in on the euphoric act.

“You play this game and special things happen sometimes,” Lowry said. “It’s pretty cool to do it there. It was a special thing to happen and I’m looking forward to turning on my phone and seeing the messages I’ve got. Not only that, it put me back in the tournament somewhat. So it was amazing.”

Lowry can lay claim to a pretty impressive double, having also notched an ace at Augusta National’s 16th. That he birdied the 17th on Sunday morning, in round two, was also striking. Two attempts, three shots.

By the time play was halted because of darkness, Lowry’s five under par put him just four adrift of the leaderboard’s summit. Anirban Lahiri, seeking to make history as the first Indian winner of the PGA Tour’s premier event, was alongside Harold Varner and Tom Hoge at minus eight before producing a birdie at the 11th immediately before golf was suspended. Paul Casey is among a trio of players at seven under.