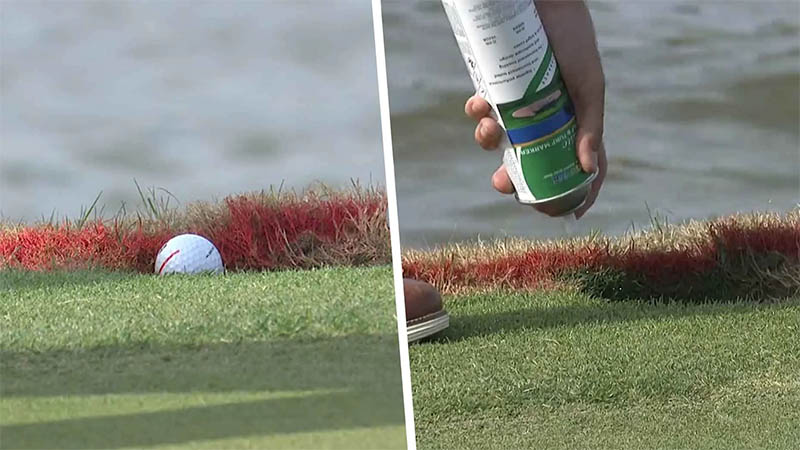 The Rules of Golf, they giveth and they taketh away. And sometimes, the rules are so weird that they do both. Wednesday provided one of those bizarre instances at the WGC-Match Play, at Austin Country Club, in Texas. Bryson DeChambeau benefitted. Thomas Pieters did not.

Earlier in the afternoon, Thomas Pieters was 3 up when his second shot on the par-4 13th came to rest on top of a sprinkler head, positioned just off the green and just inside of the water hazard line. The sprinkler head was so close to the hazard line that the red paint actually crossed over the edge of the head. The preciseness of it was important.

Pieters’ ball, resting on the sprinkler, cozied up against the red-painted grass. Since it was touching the hazard line, it was deemed to be “in the hazard.” The Rules of Golf took over from there, and Pieters was forced to take a penalty drop from the hazard or play his ball from the sprinkler head. He chopped it back into play, technically, but it was moot at that point. Tom Hoge had made his birdie, and Pieters lost the hole without getting free relief.

Not two hours later, DeChambeau found himself in essentially the exact same scenario in his match against Richard Bland. After his second shot rolled and rolled and rolled through the green, it dropped down into the depression of the sprinkler, right up against the hazard, just as Pieters’ ball had. As you can see in the pictures below, almost nothing separates the two.

“PGA Tour officials don’t make many mistakes,” on-course reporter John Maginnes said, ”but for that hazard line to be painted that way is a mistake.”

PGA Tour rules official Craig Winter agreed with him. Just because Pieters’ ruling was unfortunate, doesn’t mean that the Tour was incapable of doing something about it. Winters decided that two wrongs don’t make a right, and after being called in for a closer look, clarified that the painted line was incorrectly positioned, and that DeChambeau was entitled to free relief.

For as quick of a decision as it was, that didn’t make it any less confusing. Generally when courses are prepped for play, little is done to alter the borders of the golf course during a round. And if this wasn’t a match play championship, it’s possible we would have seen a different ruling, too, because Pieters’ score Wednesday had little to nothing to do with DeChambeau’s.

To avoid any further confusion moving forward, Winter even came in to erase the red paint crossing the sprinkler head and cover it up with some green paint. Mark that down as a new one for this Rules writer.