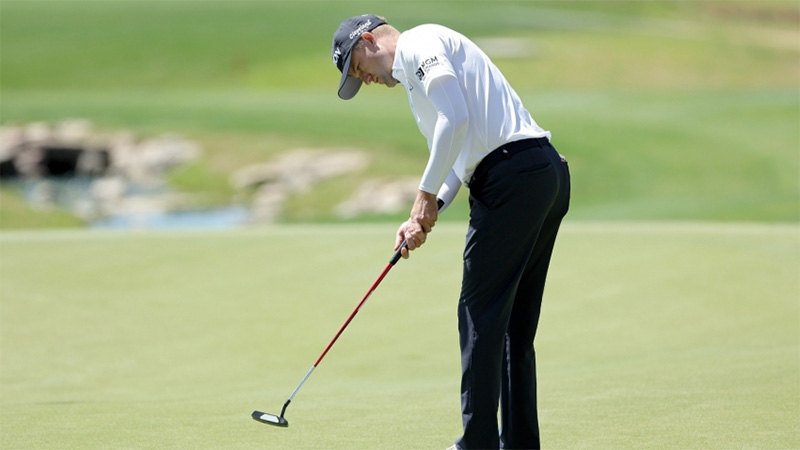 Russell Knox recorded four straight birdies on the back nine and fired a 7-under 65 on Thursday for a one-shot lead after the opening round of the Valero Texas Open.

Knox closed out his round with a seven-foot putt to save par at the par-5 18th at TPC San Antonio, and was one shot ahead of Rasmus Hojgaard.

Hojgaard fired a 66 despite a double bogey on his final hole. Matt Kuchar is another stroke back after an opening 5-under 67 and is among a group that includes Denny McCarthy, Aaron Rei and J.J. Spaun.

Defending champion Jordan Spieth and Rory McIlroy finished at even-par 72. They were outside the top 60 after one round and could flirt with the cut line on Friday.

Bryson DeChambeau had a 1-over 73. After holing a bunker shot for eagle on his 11th hole and following with a birdie on the next, he made bogey on four of his last six holes.

Knox, a 32-year-old Scotsman with two career PGA TOUR wins, started his birdie streak at No. 12. All of his birdie putts were inside 10 feet. At the 15th, he was about 20 feet away from a back pin position following his approach and chipped in from the fringe. It was his second chip-in in the round.

“That was one of those kind of bonus birdies that you need when you’re going to have a good day,” Knox said. “Obviously thrilled with the round. It’s been more of the way I want to play.”

Hogjaard, a 21-year-old from Denmark and two-rime winner on the DP World Tour, had his sights on the first-round lead heading to his closing hole. But, his drive sailed well left of the fairway. It took him four shots to reach the green on the par-4 ninth.

“I had to chip sideways back into the fairway,” he said. “Just was a little too aggressive after that. Yeah, short-sided myself and I didn’t get up and down and suddenly you walk away with double-bogey. Yeah, that was a bit annoying, but it happens.”

Kuchar was 5 under after 11 holes. Thirty feet away from the pin on the next hole, he failed to get up and down and missed a seven-foot putt for par. He got a shot back with a birdie on his 14th hole, and parred out, falling short in a bid to match his season-best round of 64 at the Sony Open in Hawaii, where he finished in the top 10.

“A lot of good and bad that can happen here on this course,” Kuchar said. “I was kind of managing early on in the round and then found a little something on about the fifth or sixth hole. I started having some birdie chances and converted on a few late in my first nine.”

Kuchar has won nine times on the PGA TOUR. McCarthy, Rai and Spaun are looking for their first.

Masters 2022: Optimism that Tiger will play grows after Monday practice round