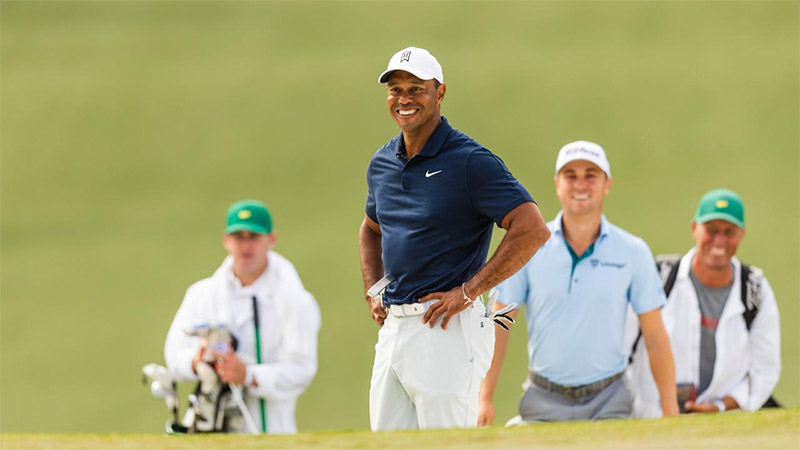 After a few hellos to the boys and a measured walk to the short-game area, Tiger Woods entered his comfort zone: three bags of balls, two wedges to alternate between and a bentgrass canvas to work with. Flanked by caddie Joe LaCava and right-hand man Rob McNamara, Woods hardly said a word as he flashed his full arsenal of short-game magic on Monday at the Augusta National practice area. He drew chips to climb up slopes and then he cut chips to spin down them. He nipped one-hop-and-stoppers and compressed back-footers. He hit a number of 4-iron bumps, a new shot he’s grooving to use around some of Augusta National’s reworked greens—like No. 3, where the false front has been steepened even further.

Woods sure didn’t look like a player still unsure of his plans for the next couple days. The official word from Woods is that he’s a “game-time decision” for the Masters. But after playing a nine-hole practice round for the second consecutive day, all signs would suggest Woods will start chasing a sixth green jacket and a 16th major championship on Thursday.

If you closed your eyes between shots, you’d have no idea Woods needed surgeons to essentially rebuild his right leg after a car accident less than 14 months ago. He looked like the rest of the pros during his 30-minute range session—hitting those floaty wedges that seem to almost knuckle in the air, flagging iron shots at flags and bringing out the launch monitor for the fairway wood and drivers. Woods hit four drivers total on the range. The first two were slight cuts, which McNamara said registered in the low 170s ball speed—slightly above PGA Tour average—one was a high straight ball that traveled 304 yards uphill, the last a low peeling fairway finder.

Woods looked far more comfortable ripping driver than he did walking to greet Bubba Watson, or up a slight hill to bear-hug his former coach Sean Foley, who was sporting a blood-red Nike sweater with the TW logo on the backside of the collar. Woods’ gait is by no means seamless; it’s not quite a limp, because it’s more due to the angle of his ankle and the length of his legs than any pain avoidance. But it’s there, an unfortunate reminder of his new reality.

Of course, his presence on these hallowed grounds is borderline surreal. Rory McIlroy said last week that he saw Woods a few months ago and didn’t think he could possibly tee it up in the year’s first major, and Woods’ inner circle held the same belief. But he made serious strides over the last month, according to a source close to Woods, and has played multiple 18-hole rounds back home at Medalist in preparation for this week. He still gets sore after a few hours on his feet swinging clubs, but it’s not a sharp pain.

After Woods wrapped up his range session, he watched his adopted younger brother Justin Thomas smack driver after driver, surely thinking something along the lines of I remember when I could do that. He was then driven toward the golf course, where a four-deep tunnel of people showered him with pure adoration. Woods couldn’t keep the smile off his face, nor could the patrons, nor could playing partners Thomas and Fred Couples. Woods’ face betrayed a deep happiness to be back in competition mode, worrying not about whether he can walk but about whether he can hold an 8-iron into a right-to-left wind.

A grown man, overwhelmed by the moment, spoke for the entire crowd: “I’m about to f—in’ cry.”

After rolling a few, Woods stepped to the first tee amid what has to be the largest practice-round gallery in recent memory. He striped his first tee shot down the center and played his second safely to the middle of the green. He missed the putt, but he hardly read it, which is how he approached putting all day—less concerned with any potential score and more with hitting lag putts over slopes and chips from popular run-off areas. Again, if he’s truly not sure whether he’ll play, he’s hiding it well.

He pushed his tee shot into the bunker just right of the fairway at the par-5 second then played safely down the fairway. It’s what happened next that was most encouraging: He said a few words to LaCava with a smile on his face and kept chatting and kept smiling as he used his right leg to push himself out of the bunker without incident.

Woods striped his tee shot on the third then played safely onto the newly rebuilt green. He pulled his tee shot into the long par-3 fourth long and left, which is the miss he’s fighting. Sometimes his body gets a tad slow, he doesn’t clear onto his left side and the swing gets army. It’s understandable, given the circumstances.

He split the fifth fairway and played a beautiful long iron to birdie range but didn’t bother with the putt. A slight pull again on No. 6 was washed away by a pumped drive on the seventh, only five or so yards behind Thomas. His approach just carried the bunker, hopped forward and spun to a quick halt, which drew one of those oooohs! from the patrons. He took his time walking up the hill that guards the front of that green, fully aware of his physical limitations. But he made it up just fine, and then he resumed practicing.

“It’s a Monday, right? But he didn’t miss many shots and he drove it great.”

Couples then gestured toward his left, up toward the putting green. There was Woods, getting some extra practice in before the light left the grounds.