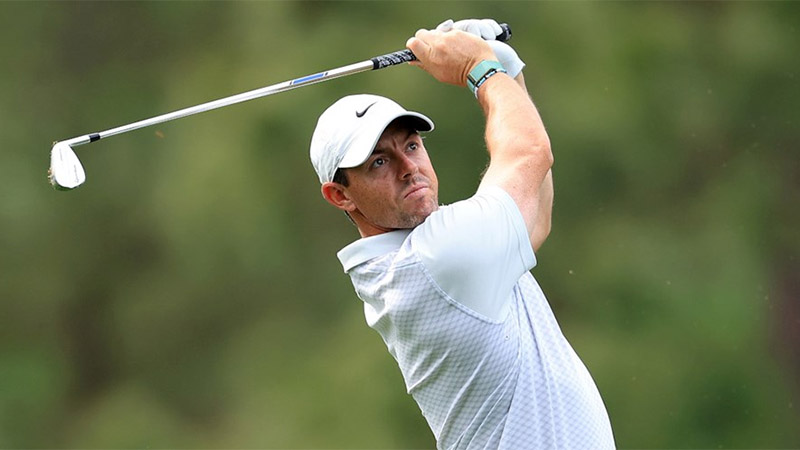 AUGUSTA: Rory McIlroy says experience has taught him that he must play against his golfing nature to have his best chance at winning the Masters to complete a career Grand Slam.

The four-time major champion from Northern Ireland seeks his first major title since 2014 this week at Augusta National in his 14th Masters start.

Experience has taught McIlroy to value discipline and patience on the famed course in a different manner than he usually would.

“It feels like playing very negatively, playing away from trouble, not firing at flagsticks, not being aggressive,” McIlroy said Tuesday.

“It feels like a negative game plan, but it’s not. It’s just a smart game plan. It’s playing the percentages.

“Sunday, if you need to take risks, you take risks, but for the first 54 holes, you just have to stay as disciplined as possible.

“That goes against my nature a little bit, so it’s something I have to really work hard on.”

McIlroy said the mental challenge posed by the Masters puts the pressure on the shotmaking, pointing to Dustin Johnson’s 2020 victory as an example of the shots Augusta National makes you play.

“He basically did everything that this golf course asks of you,” said McIlroy. “That’s what this place is all about. It’s as much of a chess game as anything else, and it’s just about putting yourself in the right positions and being disciplined and being patient and knowing that pars are good.

“Even if you make a couple of pars on the par-5s, that’s OK and you just keep moving forward.”

For all of the spectacular shots the Masters has produced, McIlroy says winning comes from making routine ones well before the great ones.

“It’s about playing to the fat part of the green, being somewhat conservative. You don’t have to do anything spectacular.

“You just have to be solid and play your game and execute your shots and stay out of trouble and avoid the big numbers.”

“I’ve always said time is on my side, and I’ll keep saying that until it isn’t, whenever that is,” McIlroy said. “I’m 32 with a ton of experience… I’ve got a few more gray hairs than I used to, but I’m still young at heart.”

Seeing Woods, Lee Westwood and others playing deep into their 40s gives McIlroy a sense that he will have many more chances to claim a green jacket.

“When I’m their age, I’ll have been on tour 30 years,” he said. “You can have an unbelievably long career if you keep yourself healthy.”

Ninth-ranked McIlroy won his 20th PGA title at the CJ Cup last year in Las Vegas. He missed the cut last week at the Texas Open but said he benefitted more from two days of weekend practice at home.

“My game is in good shape,” he said. “It has felt better than the results have maybe suggested the last few weeks.”

McIlroy had his best Masters showing with a fourth-place finish in 2015 in his first bid to complete the Slam at Augusta National.

In 2011 he led for three rounds but stumbled to a final-round 80 and shared 15th, only to win his first major title two months later at the US Open.

Masters 2022: Optimism that Tiger will play grows after Monday practice round