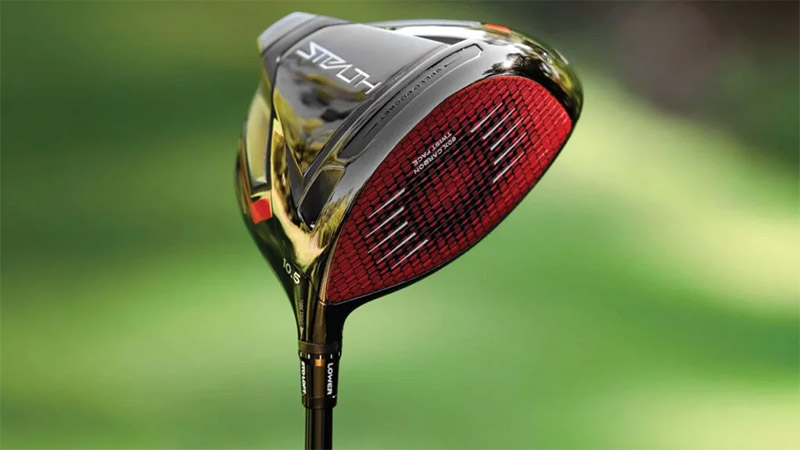 A carbon-composite face—not the crown or even the body as we’ve seen in various stages over the last 15 years or so, but the part of the club that makes contact with the ball—is the foundation for TaylorMade’s three new Stealth drivers. The trio includes the adjustable weight Stealth Plus; the higher-launching, higher-forgiving Stealth; and the high-launching and draw-biased Stealth HD. The face, made of 60 layers of carbon-composite fiber, is 40 percent lighter than a similarly sized titanium face to create a more efficient energy transfer and better ball speed consistency across the face.

TaylorMade believes the Stealth drivers, which include the sliding movable weight Stealth Plus; the high-launching, high-stability Stealth; and the slice-fighting Stealth HD, perform better with respect to those springlike effect properties and guidelines because the carbon-composite face is significantly lighter than a titanium face. The faces on the Stealth drivers weigh 26 grams compared to 43 grams were they made of titanium. It’s a complex bit of engineering theory, but the idea is that the lighter the face, the more efficient the collision because when there’s less mass taken up by the face, there’s more mass in the body. The problem for titanium is it can’t really get significantly lighter anymore, said Matt Johnson, TaylorMade’s principal engineer in its advanced design division.

“You could get thinner and thinner with titanium but then it becomes nonconforming so the only way to overcome that is to go to a new material,” he said, noting the new Stealth faces also are 20 percent larger than TaylorMade’s recent SIM drivers. “It needs to be appropriately stiff but as light as possible.” That makes carbon-composite fibers the great untapped alternative.

With their return to an all black crown, TaylorMade is back to making some of the best-looking drivers in golf. Elements of their last few generations still remain, primarily the large carbon crown, but the lack of different colors gives the Stealth driver a more traditional appearance. There is Stealth branding on the heel of the crown, but it lives up to its name by blending in almost completely.

As I noted in my two previous Stealth driver reviews, there is barely any difference between the three models at address. Each one is 460cc with a very slight pear shape. This allows golfers to buy based on performance rather than looks, which I applaud.

The most eye-catching piece of the Stealth driver is the red Carbon Twist Face. I like that it has a lot of visual “pop” without being distracting at address. Personally, I found the red dark enough that I barely noticed the difference when I set up.

The TaylorMade Stealth driver is really impressive. What stood out most was the consistency of ball speed. It took a really poor swing to drop my smash factor much below 1.45. With ball speed being the primary engine of distance, the importance of this can’t be overstated.

That consistent ball speed comes from the stability of the head and the technology in the face. Most obvious is the 60X Carbon Twist Face, named for the sixty layers of carbon fiber and the shape which helps keep off-center shots straighter. The other key element is the Asymmetric Inertia Generator – the large weight at the back of the head. This raises the MOI and keeps the head from twisting on mishits.

Higher forgiveness is one of the primary things that separates the Stealth driver from the Stealth Plus. Where the Stealth Plus has a Sliding Weight Track to dial in ball flight, the Stealth has a heavier Asymmetric Inertia Generator for more forgiveness. The difference isn’t night and day, but I found it noticeable and would definitely favor the Stealth for my own game.

The TaylorMade Stealth driver is firmly in the conversation for driver of the year and has a real shot to earn a spot in my bag. The consistency of the ball speed is remarkable, and the Stealth also provides excellent stability. Don’t be surprised to regularly see this driver in the winner’s circle on Tour and in fittings this year.