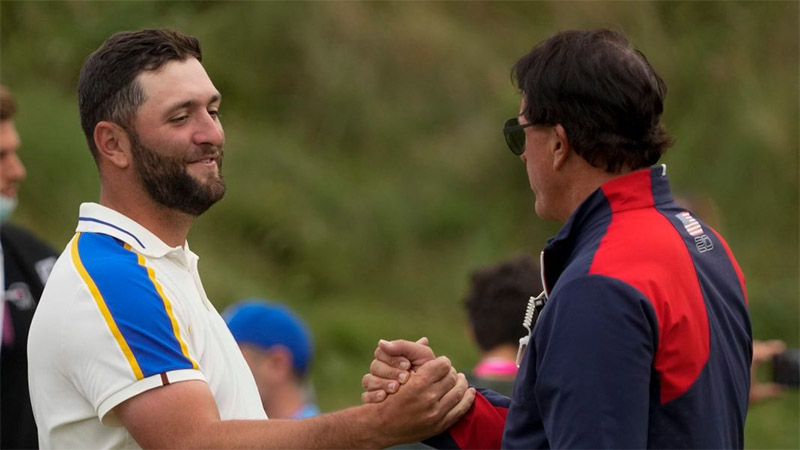 To many, Phil Mickelson’s reputation is tarnished. But to Jon Rahm, that’s not the case.

Following controversial comments regarding the Saudi-backed league and PGA Tour, Mickelson has stayed away from golf and the public eye since February. But speaking to Todd Lewis Tuesday ahead of the Mexico Open, Rahm said he thinks it’s time to ease up on the six-time major champion.

“[Mickelson] has given his life to golf,” Rahm said. “A lot of what we have, a lot of people don’t know, a lot of what we have and what we are competing for right now is because of him. A lot of people focus on Tiger but he is easily one of the top 10 best players of all time. He is a Hall of Fame and we should recognize him as that. He has given his life to the public, no one has signed more autographs, no one has done more for the fans.

“I know he’s in a bit of a slump for whatever it may be. I don’t think his whole career or whole legacy should change because of a couple comments.”

Rahm and Mickelson’s relationship goes back to the Spaniard’s days at Mickelson’s alma mater, Arizona State, and they have developed a close friendship despite an almost 25-year age difference. When Rahm won his first major at last year’s U.S. Open, the first player to greet him on the range was Mickelson.

“He’s still a great friend of mine,” Rahm said ahead of the WM Phoenix Open. “I don’t know why he said what he said or why he said how he said it, but all I can say is I support him as a friend, yet I don’t agree with everything he said.”

Mickelson filed entries to play the PGA Championship and U.S. Open, along with a release to play the LIV opener in London in June. However, Mickelson’s agent, Steve Loy, said: “Phil currently has no concrete plans on when and where he will play. Any actions taken are in no way a reflection of a final decision made, but rather to keep all options open.”

Although Rahm is bullish on Mickelson moving forward, he also believes there’s mending to be done on the 51-year-old’s side.

“Everyone makes mistakes and everything can be rectified. I believe that can happen,” Rahm said, “but it has to come from him as well.”

Best Rotation Drill for your Backswing and Downswing