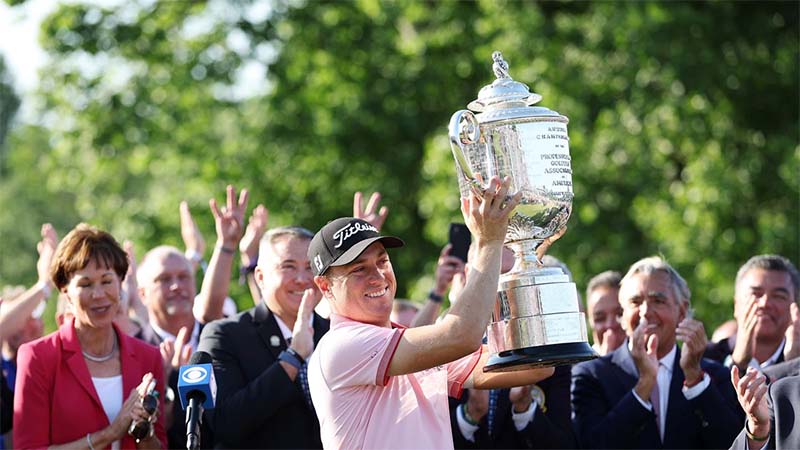 It took 21 holes on Sunday, but Justin Thomas is now a two-time PGA Championship winner.

The 29-year-old beat Will Zalatoris in a three-hole playoff at Southern Hills in Tulsa, Okla., to cap off the final round of the 2022 PGA Championship. The victory gives Thomas a second career major title to go along with the 2017 PGA Championship.

Thomas and Zalatoris both held 5-under scores after 72 holes, prompting the fifth three-hold playoff in PGA Championship history.

Thomas and Zalatoris matched birdies on the first playoff hole, the par-5 13th. Thomas then picked up the edge by getting a birdie on the 17th hole, while Zalatoris settled for par after narrowly missing a birdie putt.

Zalatoris had a chance to catch up to Thomas on the third playoff hole, the par-4 18th. Thomas came through with a clean par, tapping in to secure the championship.

Thomas held the lead at the time he finished his second round, scoring a 67 on Thursday and Friday. He followed that up with a four-over 74 on Saturday, but he notched his third 67 of the tournament on Sunday to earn a spot in the playoff.

Thomas will be receiving a pretty payday to go along with his PGA Championship title. He earned $2.7 million of the tournament-record $15 million prize pool for coming in first. Zalatoris will also take home a seven-figure prize of $1.62 million.

A playoff seemed unlikely for most of Sunday’s action, especially one without Mito Pereira. The 27-year-old Chilean took a three-stroke lead into the final round and held onto that lead for 17 holes. But like his final tee shot, his championship hopes went underwater on the 18th hole.

Things didn’t get much better after the tee shot. It took three more strokes before Pereira got the ball onto the green. He earned a double-bogey to end his round and went from one stroke ahead to one stroke behind Thomas and Zalatoris.

Pereira tied his best PGA Tour result of third place, a result he first got at the Fortinet Championship in September. He was also in the spotlight last summer, tying for fourth at the Tokyo Olympics with a score of 15-under.